Have you ever wondered if there are certain signs a ghost is in your room or your home? Perhaps something just feels different to you, or you sense an eerieness all of a sudden.

It’s easy to get caught up in the scary feeling that horror movies give us or to feel a sense of wonder around Halloween.

But what if it’s just a random strangeness that comes over you? Are you uneasy about going up to an attic or into a basement? Do you swear something just passed before your eyes?

As someone who has experienced the paranormal and is extremely sensitive to the presence of spirits, I can tell you there are unmistakable signs a ghost is in your room or your home. Let’s take a look.

In horror films, we often see the protagonist being taunted with lights flickering off and on. But there is something to that and it’s possibly one of the most obvious signs of paranormal activity and ghostly presence.

Spirits can manipulate electricity and energy, and it’s very possible there is a spirit in your presence if you suddenly question whether or not you paid your electric bill.

Often this doesn’t seem to be an intentional choice by the entity or ghost but sometimes because our attention is always so heavily focused on electronics they gravitate there. 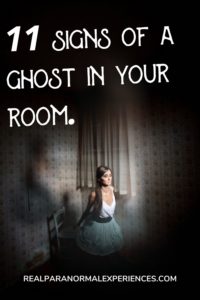 Commonly known as cold spots, feeling a sudden drop in temperature or feeling like a cold wind blew past you is a sign that ghosts are present. Ghostly presences can easily cause the temperature in a room to change dramatically.

Paranormal investigators will often use digital thermometers to keep track of the changes in air temperature when investigating a haunting. It will likely be confined to one area of the home and happen more than once.

You might feel coldness across your face or strange areas in a room. Sometimes it’ll be an entire room.

Much like the lights, unexplained noises are something Hollywood seems to have got right.

One of the most common things that paranormal investigators experience is the presence of ghostly sounds. Knocking, footsteps and laughter are often reported.

There may be voices coming from different parts of your home. A spirit’s residual energy may be hovering in the physical world, and often the sounds you are hearing are their voices from when they were still alive.

Imagine that the space between the living and the dead contains the memories of their lives.

You may even hear your name called or the names of others being said. Paranormal investigators use digital voice recorders to try and capture electronic voice phenomena or EVPs on tape.

Sometimes this can take the form of strange noises which won’t make sense but you can use something like Afterlight box to try and pick out actual words.

Are there times when you know you left your phone on the counter and later find it somewhere odd, like the bathroom sink? Or maybe your shoes, which you always leave outside the door, show up in your living room?

Perhaps you are just forgetful, or maybe it’s something else. One of the critical ways a ghost will try to communicate is by moving objects.

Often they are trying to get the space to be as they would have liked it when they were alive, especially if you are living in what used to be their home years ago.

Have you ever experienced the smell of a relative’s perfume or scent long after they have been gone? Or maybe you suddenly smell the type of whiskey your grandfather used to enjoy.

Often when a loved one is trying to send us a message, you may get a sudden whiff of something that reminds you of them. These are signs that often take place soon after the person has passed on.

Peculiar experiences with birds are a common sign your loved one is trying to reach out. Cardinals and hawks are often seen after someone has passed.

I remember seeing a beautiful hawk land on a telephone line directly in front of me as I waited at a bus stop. It was only days after my grandmother passed. Another relative also experienced a hawk swooping down over the hood of her car as she drove.

Paranormal specialists assure us that this is often a sign that your loved one is happy and at rest.

When we die, the energy from our bodies is transformed into electromagnetic energy. So when an EMF reader jumps suddenly, it can indicate the presence of a spirit.

We have all been in a building alone when we suddenly hear the slamming of a door. And you know no one else is around. Sure, it may have been a draft of wind, but slamming doors is a ubiquitous sign that spirits are with us.

An actual manifestation is something to behold. It’s one of the things a paranormal investigator uses as physical proof of a spirit. Sometimes things can move quickly out of the corner of your eye, or there is a shadow that dances on the wall.

Sometimes there’s a manifestation of something but it’s not a clear form. Tools like the GhostTube app can use your camera to try and pick out these faint forms and let you track them.

A Sense of Unease

Often there is no other sign of a spirit than just a general sense of unease. This has happened to me more than once.

I remember going to look at a house for sale years ago.  As soon as I walked in, I felt a terrible sense of dread and unease. I didn’t want to be there, and I knew someone or something had already staked its claim.

I recently went on a tour of a very old mansion in my town. Walking around the first and second floors of the home, I was impressed with the woodwork and antiquity of the house. But as soon as the tour brought us to the third floor, I wanted out. Something was there, and we were not welcome in its presence.

Seeing one of these signs individually, probably won’t mean much by itself (unless it’s one of the really blatant ones) but if you suspect there’s a ghost – that’s likely a sign in itself.

For the most part, you can probably just ignore the presence until it leaves. Or take the opportunity to check out or ghost hunting tools and make contact. They might be there to actively try and communicate with you.