Are Ouija Boards real? Do paranormal investigators use them to actually talk to spirits or is it just a party game made popular by one too many Hollywood horror movies?

While not as useful as something like a spirit box for communicating with a ghost, there certainly are accounts of Ouija boards being used to get intelligent responses and the logic behind them does fit with our understanding of how ghosts behave.

I’d like to touch on some of the scientific studies and anecdotal evidence but I’ll certainly start by saying this is not a tool most ghost hunters are really going to opt to use. If you actually want to communicate with ghosts there are better tools, however, there definitely could be something coming from the messages of the Ouija board.

History of the Ouija Board

The Ouija Board, or Spirit Board, was part of the spiritualist movement that began in the late 19th century. Following the American Civil War, mediums began to initiate different means of communicating with the deceased.

The Ouija Board itself was the idea of businessman Elijah Bond, who patented a planchette sold with a board much like the existing talking boards that were becoming more and more common.

The board had the alphabet printed on it and was given the name Ouija, after claims that the word means ‘good luck’ in Ancient Egyptian text. After an employee of Bond’s, William Fuld, took over the production of the board, he popularized the idea that the name Ouija came from the combination of the French and German words for ‘yes.

Spiritualists believed that those who had already passed were open to being contacted by the living. The Ouija Board was originally regarded as a party game where friends would gather for board sessions, but it was soon popularized as a tool to connect with the dead during the early 1900s.

How Do Ouija Boards Work? 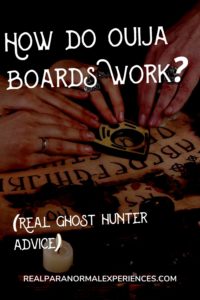 We all have childhood stories of how playing with an Ouija Board may have connected us with spirits. After all, it is a big part of pop culture and scary movies. And even into adulthood, many still swear by it. So for both adults and children, the thought of a device that can help you communicate with the dead is pretty cool.

When using the Ouija Board, people generally gather together around the board, placing two fingers on the planchette. Then, someone asks a question, and the movable piece on the board will gravitate to the letters, spelling out the answer.

The basic idea is when a spirit is too weak to communicate verbally with us they only need to be able to gently nudge the movement of the planchette making communication possible.

People will often ask who is controlling the planchette, hoping to get the name of a spirit or deceased loved one. There are many people desperate to reach their dead relatives. Ouija Boards can give some eery messages to their users and even issue warnings to people. People truly believe take these messages very seriously and deny that the movement is coming from anywhere but the world beyond.

Several people say there is no harm in trying to connect with those from another realm and that most spirits are not out to hurt anyone.

But there are also those who believe that one should never use the Ouija Board as ill-intended spirits can wreak havoc and affect the emotional well-being of those using the board. Many people also say accounts of spirit possession began with the use of an Ouija Board.

However, like the research team at Aarhus University in Denmark, there are also those that are ready to debunk the mystery.

With eye-tracking devices and by using data analysis, the team looked at the behaviors of forty experienced users of the game. The researchers wanted to be able to predict unconscious eye movements to see if the game players looked at a letter prior to the planchette moving.

Science says that a person’s feelings have control over their muscular movement, as the brain has a primary ability to connect prediction and consequence. And so many skeptics believe that the planchette moves due to unconscious motor behavior.

Much like dowsing rods, the movement of the Ouija Board pointer is due to the ideomotor response. The mind can tell the body to make certain movements without the person being aware of it, and so the effect is how the mind makes the muscles of the hands move in a certain way.

Spooky Accounts of the Ouija Board Working or Not?

Abby from Florida says that she was playing with the board in her room during the day, and when she went to bed, her computer screen had turned on by itself.

After turning it off, it clicked back to life again. Abby then unplugged the machine, and the computer came on yet again. Abby buried her Ouija Board in the yard that night as she was sure evil spirits were trying to hurt her.

Vince, from Delaware, remembers being bullied into playing with an Ouija Board with a friend as a child. But once they started to play, the lights began to flicker off and on, and the room around them got very cold. A strange Russian spirit began to communicate with Vince and his friends.

Taylor from Arizona says that she was playing with the Ouija Board after her grandmother recently passed away.

As the planchette began to send messages to Taylor that led her to believe it was her grandmother,  she soon realized she had been played the fool. Her friends started to laugh and admitted that it was them moving the planchette.

Ouija Board vs. Spirit Box

The Spirit Box works a little differently. It is a small device that quickly sweeps through radio frequencies, creating white noise. It’s a more scientific approach compared to the Ouija board and removes the option of human error giving a false positive or screwing with the message from a ghost. It also allows for more complex answers in a shorter period of time.

While they’re a little more complicated, they are the common choice of a paranormal investigator and it’s almost always what you’ll see in the field by professionals.

How to Make a Ouija Board for Yourself 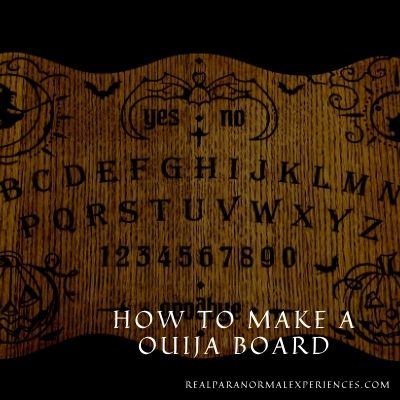 For getting started in ghost hunting, you can create your own DIY equipment and an Ouija board is pretty simple to replicate, especially compared to making your own spirit box.

To make a homemade Ouija Board, you will need to gather the following items:

Using the stencils, or a plain marker, write out the entire alphabet along the upper to the middle section of the board. Write numbers 0 through 9 below that. In the upper left and right-hand corner, write yes and no.

In the lower-left and right-hand corner, write Hello and GoodBye. Then, use your large letter O or even a large circle to get your answers to your questions.

You are good to go! Have fun and be safe!