The world abounds with tales of supernatural or otherwise cryptic creatures, and North America is no exception. 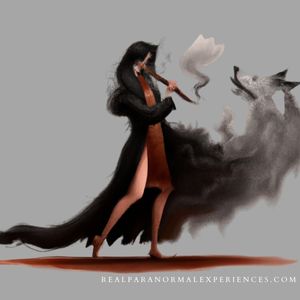 Along with the ever-elusive Sasquatch or “Bigfoot” run less well-known but even more spine-chilling stories about the Navajo skinwalker.

The problem is that the skinwalker legend is rarely communicated with ‘outsiders’ of the Navajo culture. Many traditional Navajo people are highly resistant to being asked about lore. They believe even uttering the name attracts this evil energy.

The skinwalker is believed to be a holy man or sage who is so connected with nature that he or she can assume the form of any animal.

But this amazing ability is not gained without a price: the holy man or witch must perform an evil act, such as murder before they can unlock this power.

Additionally, they must kill the animal they wish to take the form of, making their connection with nature truly perverse. Are skinwalkers real, or is it just a legend with no credibility?

Many people have claimed to have had encounters with skinwalkers. Many Navajo people, especially older ones, believe without a shadow of a doubt that skinwalkers do indeed exist.

They believe so strongly that many of them are reluctant to talk to outsiders about the skinwalkers, fearing that they may attract these terrifying and malicious creatures into their lives.

In addition, it is believed that non-skinwalkers are not allowed to witness the ritual that leads to the creation of skinwalkers, making information even more scarce – the skinwalkers truly are shrouded in mystery.

Example of a Skinwalker

Because older Navajo people are afraid to talk about the skinwalkers, most of our information comes from younger Navajo people who don’t necessarily believe in these tales.

One very interesting point is that many of the stories of encounters with skinwalkers come from people who are not Navajo, even people who have never heard of the skinwalkers and, upon looking for information about what they’ve experienced, come to the conclusion that they have witnessed one of these creatures.

These encounters usually occur on or in very close proximity to Navajo reservations – this fits the skinwalker story since only Navajo people can become skinwalkers.

One woman claims she was driving through Navajo territory at night when suddenly a man appeared, running next to her car. This would be odd even if it weren’t for the fact that the car was driving at sixty miles per hour!

To put that in perspective, the highest speed at which a human has been recorded running is 28 miles per hour.

The man tapped on her window as she was driving, gave a sinister-looking smile, and then ran away at unbelievably high speeds, disappearing into the night.

After researching, she came to the conclusion that she had encountered a skinwalker.

In Sedona, Arizona, not too far from this woman’s encounter, a man claims to have experienced the same thing: a human-like creature running past his vehicle even though he was driving at sixty-five miles per hour!

Arizona is full of stories of encounters with skinwalkers. If they’re real, this is probably no coincidence, since Arizona is the area in which many Navajo people live – evil medicine men or witches among them would have to be the source.

Winslow and Window Rock is especially famous for these encounters; you’d have to be very brave and perhaps stupid to go there looking for a skinwalker (I would not recommend it).

Looking for a Skinwalker

A second interesting story comes from when a girl was visiting her grandmother in Nevada. The elderly woman was 100 % Navajo, and the little girl remembers her shouting at her brother to “get away from it!”

She then saw a very large, unnatural-looking dog who was staring at her grandmother. This dog apparently had yellow eyes.

The grandmother lamented that “it had found her.”

The otherworldly-looking dog eventually left (the girl can’t remember if it was at high speed or not, as this is what skinwalkers are known for), and shortly thereafter, the grandmother moved away from her house, believing fully that she had encountered a skinwalker who was trying to do her harm.

Another encounter occurred when a man living on a farm near Navajo land heard what he thought to be wild dogs outside.

He grabbed his shotgun, hoping to scare them off from the farm, but as soon as he pumped it the dogs looked directly at him, stood up on their hind legs, and ran away at incredible speeds. 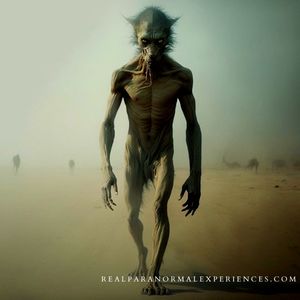 Although his family believed in skinwalkers, this man did not; he does now.

Something similar happened in New Mexico when a woman saw a strange presence outside of her house one night.

At first, she thought it was a man until she got close enough to see that, whatever it was, this bipedal, muscular creature had the head and body of a wolf.

She screamed (as most of us in this situation probably would!) before, again, the entity ran away at an unbelievably high speed.

A man with the body and head of a wolf sounds familiar to those of us interested in folklore: could it be that the so-called “werewolf” is actually a Navajo skinwalker?

The so-called “werewolf” is actually a Navajo skinwalker

One night, a student was taking the bus home from a basketball game. The bus would have to drive through the Navajo territory. This was when another eyewitness encounter transpired.

Suddenly, the bus driver sped up to about 85 miles per hour, and the student was surprised by this as the driver was usually very careful.

But then he saw it: a creature running straight towards the bus. The entity, which looked like a wolf-like human and had glowing yellow eyes, made eye contact with the student and smiled, showing off its sharp, canine-like teeth.

All of the other students were asleep, but this student and the bus driver shared a glance, realizing that they had just experienced something truly bizarre.

From what we do hear (in the rare stories we get), there are some common characteristics you can look for.

The Subject of Skinwalkers

Are skinwalkers real? The question is difficult to answer. It’s certainly interesting that so many of these stories share features in common and that many of the witnesses were non-Navajo people (meaning they didn’t necessarily believe the stories) or had never even heard of the legend of the skinwalkers.

It seems that, usually, the skinwalkers are wolf or dog-like, sometimes with eerie yellow glowing eyes, and capable of running at supernatural speeds.

I wonder if Bigfoot could be a skinwalker who has taken on the form of a bear – just imagine a half-human, half-bear creature walking around on two legs and you have something that looks like a Bigfoot.

It seems unlikely, though, since Bigfoot encounters are described all over the country and not just in the southwestern United States…