If you are a true horror film fanatic, watched the tv series Supernatural or even read science fiction novels, you’ll have heard of Wendigos, but do you know or the more pressing question, where they originated from? I’ll give you a clue it is not from the creative minds of writers.

Wendigos originate from the legends of the first indigenous cultures that settled in Canada. The Wendigos are often referred to as malevolent spirits and have been described as human-like creatures, although the majority of those who have been unlucky enough to encounter a Wendigos have not lived to tell the tale.

Legends say the first Wendigo was a lost hunter from the Algonquin-speaking peoples. During a hunt in a bitterly cold winter, a lack of food drove him to cannibalism. After eating the flesh of a human, he transformed into a cannibalistic monster with an insatiable hunger.

What is a Wendigo?

Wendigos are known as the ‘spirit of winter’ and they symbolize danger, selfishness, glumness, greed and excess.

The Native Americans described the creature as a gigantic spirit with a heart of ice over sixteen feet tall. Legends say they have glowing eyes, long, overgrown yellow teeth, an overly long tongue. Their skin has a yellowish tinge and is almost translucent due to its skeletal and deformed appearance.

Other than their appearance, there are common traits across various reports and encounters:

What Do Wendigos Do?

Wendigos are predators, unlike other terrifying cannibals you may know, names such as Hannibal Lector. The wendigo does not stalk his prey. He is far more cunning. Perhaps one of the most terrifying attributes of the wendigos is its ability to mimic its prey, as it can perfectly imitate any human voice. 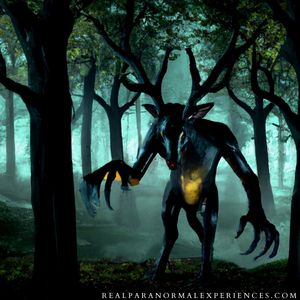 So don’t think for one second you are safe in the city as it will use this ability to lure you into the wilderness, be it a forest, lake or up a hill,  away from safety and will attack. Wendigos are also said to have the ability to unlock doors and enter homes. There are also reports of the Wendigo curse, where you yourself then become a Wendigo.

Wendigos are the perfect hunters. Some people say it’s due to their supernatural abilities, such as super speed, heightened endurance and heightened senses.

They tend to live in freezing cold climates around north Canada, Michigan and Minnesota, although there are sporadic reports from further-flung regions, and they’ll commonly rip prey to shreds before hibernating for long periods of time (seemingly years).

Copious amounts of evidence suggest that Wendigos do walk amongst us. One particular town called Roses in northern Minnesota from the 18th century allegedly reported many visits from a wendigos’. After all of these sightings, unexpected death or disappearance occurred.

The most infamous is about a man named Swift Runner, who was of Native American descent and murdered and devoured his entire family in the winter of 1879. when called to trial, he explained he was possessed by a ‘Wendigo Spirit” unfortunately for him, he was still hung for his crimes.

Another incident that occurred was that of Jack fiddler, who was known as a medical doctor. A traditional healer as well as a spiritual leader who served an indigenous tribe in Canada. He was well known for defeating wendigos and claimed to have killed over 14 in his lifetime. Jack and his brother often did this by killing those who they believed had been possessed by wendigos. In 1907 they were both arrested for homicide.

Legends state that in the early 20th century, the Algonquian people had a large number of people go missing from their settlements, and the evidence suggests it was caused by the curse of wendigos.

The majority of Wendigo’s sightings happened between the 1800s and the 1920s. Do they still walk among us? Why have their sightings decreased?

How Do You Stop Wendigos?

As previously mentioned, wendigos are exceptional hunters, so if you can’t outrun them, how can you stop them? Human weapons have been known to be useless against wendigos as an injured wendigo is said to regenerate.

They’re a good hunter in the day but exceptional hunters at night (making them almost impossible to defeat with the naked eye). While they are animal-like, they seem to match human intelligence, and they play a torturous game by baiting their prey, growling, shrinking impersonating the voice of your loved ones calling for help. 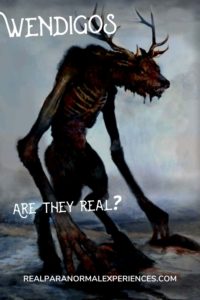 They don’t have access to our technology, and perhaps that is the key to our defense against them. There are reports of a Wendigo being able to regenerate quickly, so if you do get this far, stories of encounters suggest removing the heart and burying it separate from the skeleton of the creature itself.

That said there are certain stories that seem to lend them more towards an evil spirit than a physical beast meaning your best defense could be a more spiritual one.

What are Wendigos Afraid Of?

Anasazi is a Navajo word that means Ancient ones or Ancient enemies. Anasazi symbols originated from the indigenous people who settled in the southwestern United States of America. They used these symbols to protect themselves from Wendigos.

There are several different Anasazi symbols used, and a lot of them resembled the things found in nature, such as flowing water or the sun. Similar to salt circles drawn to protect against ghosts.

How Do You Become a Wendigo?

According to legends, wendigos are formed in two ways: