Does anyone remember the show Unsolved Mysteries with William Shatner? If you are an 80s child, like myself, you probably do.

Once in a while, the show would feature a story on the paranormal. And it was usually scary as hell. But that was almost 30 years ago.

Fast forward to 2021, and you have your pick of the paranormal, haunting, and ghost hunting shows. It’s not to say that any of them arent’ real, but there are just so many of them!

I have been a fan of anything paranormal my whole life, so I consider myself old school when it comes to ghost hunting shows. I’m putting together my own personal list of shows that I think are the best and deserve credit.

Ghost Hunters has been on the air since 2004. So that’s over fifteen years. And I remember the very first season like it was yesterday.

As a lifelong New Englander, I love that the show took place in Connecticut. The show featured Grant Wilson and Jason Hawes, who founded The Atlantic Paranormal Society, also known as TAPS.

It was so cool seeing these two guys from New England, who were plumbers by day and paranormal investigators by night.  Grant and Jason later teamed up with Steve Gonsalves, who I had the pleasure of meeting, to form their team of ghost hunters. 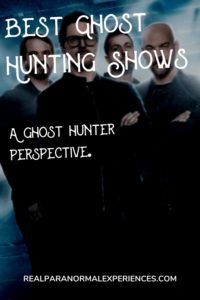 What I love about Ghost Hunters is that from day one, the objective of their investigation is to debunk the hauntings. The crew goes through every possible scenario to figure out what could be causing the so-called paranormal activity.

And often do just that, but it’s the times when they can’t debunk the activity that makes it interesting.

The team has provided explanations such as cold spots being a drafty window, strange noises in the walls as mice or rats, or mysterious lights being those of a passing vehicle.

The TAPS crew will show up at a location, speak with the owners and survey the property. After an interview with the owners, the team sets up to do their investigation.

They figure out where the paranormal hotspots are and set up their electronic equipment, such as EMF (electromagnetic field) readers, audio to record EVPs, and digital cameras. The team will often try to encourage the spirits to make themselves present.

After the footage is collected, the team pulls everything together for analysis. They discuss their findings with the location owners and try to offer suggestions if they are genuinely dealing with paranormal activity.  They also answer any questions the owners may have.

The team readily admits that most investigations leave them with very little evidence of paranormal activity. This is what makes me really love this show. Because when they actually do find the activity, you know it’s real. These are not just made-up ghost stories.

The Ghost Hunters team have truly been the pioneers of paranormal reality shows and ghost hunting.

Ghost Adventures is another show I have been watching since they premiered on the Travel Channel in 2008. The team is led by Zak Bagans, Aaron Goodwin, and Nick Groff.

What I like about Ghost Adventures is that Zak gives a fantastic history of each haunted location before they visit. The crew tours the site with the owners or caretakers, as Zak explains the history of the paranormal activity that has been reported.

As the team goes through the site, speaking with those who have witnessed the activity, they set up an “X” with black tape to mark the spots that are deemed alleged with activity.

The crew will later return with their equipment, such as digital thermometers, EMF readers, and audio equipment. They then stay at the location overnight, in a lockdown, from dusk until dawn to capture the paranormal evidence. In addition, the team will often place objects to entice the spirits to show themselves.

The Ghost Adventures team has experienced many equipment malfunctions, such as battery drainage and voltage spikes, which they say are due to the presence of the paranormal.

Zak has also had some terrifying experiences, including actual possession by an evil spirit. I have seen these take place, and I can tell you, they are genuine. Sometimes things might be blown out for dramatic effect but it’s not scripted.

A show which deserves recognition is Paranormal State. In 2001, Ryan Buell founded the Paranormal Research Society while attending Penn State.

Ryan was 19 when he founded the student-led club that investigated hauntings and demonic disturbances. Ryan has been a believer in ghosts since he was affected by them as a child.

With each episode, Ryan and his team handle received distress calls from families who are terrified by events in their homes. Often the paranormal phenomena these families encounter are life-changing.

The show debuted on A&E in 2007, and I have been a huge fan throughout its end in 2011. Though the show no longer airs, I still consider it one of the best ghost hunting shows out there.   I am entirely convinced that each encounter is from true events.

Besides the fact that the show is terrifying at times, I love that besides the standard electronic equipment, the team also used the help of psychics, psychologists, and demonologists to help them unwind the bizarre cases they come across.

The Paranormal State team has consistently used the help of Lorraine Warren, perhaps the world’s most famous psychic and paranormal investigator. She is known for her and her husband’s experience investigating haunted houses throughout New England and the world.

Lorraine has brought experience, expertise, and a sense of wisdom to the show that I don’t think has been seen anywhere else.

Though ghost hunting shows are abundant today, these three have deserved the most credit, in my opinion.