Anyone who has cats can tell you they can be a little strange. They often stare at nothing for minutes to hours or run like they’re being chased by the devil. This erratic behavior is often shrugged off, but many propose it’s something more. Can cats see ghosts and demons?

All signs point to yes: cats have a sixth sense and can see ghosts and demons. This is based on their mythology, history, and their amazing extrasensory perceptions.

It isn’t just cats but other animals have senses that humans just don’t. For example, dogs can see ghosts too and there are a lot of ghost stories out there that have various animals reacting to something we can’t see with the naked eye. I still don’t suggest trying to intentionally train any pet to react to ghosts or different spirits but it seems clear they have senses naturally we have to use technology for.

Can Cats See Ghosts or Demons?

Pet owners with cats know this story well: you’re lying quietly on the couch, your feline companion sleeping on your lap, when without warning they race after something, chasing it to another room. Or maybe your cat has stared at a wall while hissing, meowing, or purring.

We’ve all wondered what they’re looking at, and a lot of us believe that it’s ghosts. A survey conducted by Blue Cross in the United Kingdom found that over 30% of people with pet cats believe that their furry companion can detect paranormal activity.

Don’t let their penchant for sleeping all day fool you: cats are sensitive creatures that are highly attuned to their environments and favorite people. This means that they can sense bad energy and bad intentions.

Because our kitties are so in-tuned with us (whether we know it or not) they’re adept at reading our body language. They know when we are upset, or scared, and will react accordingly.

This means it’s very likely that when your cat hisses at a random spot above the litter box, they’re actually sensing something evil or demonic, and telling it to take a hike. 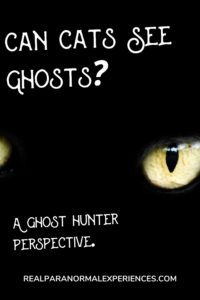 Our feline friends can also sense when we are affected by positive energy. This can be because of something we’ve experienced in our day-to-day life, but also because we may be in the presence of our guardian angel.

Cats may even be a sort of guardian angel.

For better or worse, cats have been closely linked to death for centuries, sometimes with good reason.

Cats being able to predict death and illness is not just a theory, it’s been well documented. Stories about a pet sensing an oncoming illness or hidden disease are legion. Their senses and intuition go far beyond what humans can perceive.

In the wild, cats communicate largely through body language, requiring them to be constantly aware of physical changes. Coupled with their ability to see, hear, and smell things we can’t, and it’s not hard to understand how they can sense illness and even death.

Why Can Cats See Ghosts?

There are two components to why cants can see ghosts: their senses, and their relation to the spiritual.

While human hearing is nothing to be sneezed at, cats have us beat on every front. While we can hear a large array of frequencies (less as we age), cats can hear frequencies four to five times higher than we can. These frequencies are called ultrasounds and are for cat ears only.

On top of that, while people can pinpoint the source of an audible noise with up to 20 degrees of precision, cats can pinpoint faster, and within five degrees.

Cat vision is just as miraculous. Our vision is based on all three primary colors, and cats’ are based on two: blue and yellow. That means they largely see in shades of green, yellow, and blue.

Far from a hindrance, you may have already guessed that this gives them vision similar to when we wear night-vision goggles. Research also indicates that they can see ultraviolet light; a range of light that human eyes are designed to block by default.

Because they’re both prey animals and hunters, in addition to vision optimized for hunting at night, their eyes are placed further apart, giving them a wider field of vision with which to see both their predators and dinner.

Cats have a long and illustrious association with the supernatural realm. Whether blessed by gods or familiars to witches, cats have always been connected to the other side.

Most of us already know that cats were worshipped by ancient Egyptians. It’s even said that in ancient Egypt, the punishment for harming a cat was being forced to shave off your eyebrows, and the eyebrows of your entire family, to signal to all your depraved crime.

Not only that, the Egyptian god with a cat head, Baset, is one of the most highly regarded deities in the Egyptian pantheon.

Baset is the goddess of many things, but most pertinently she is the goddess of protection. She, and her mortal feline compatriots, are known for protecting homes from both malevolent spirits and disease. She is also sometimes depicted as a guide and helper to the recently deceased.

Some Buddhists also credit cats as being spiritually enlightened, evidenced by a cat’s ability to be completely present and focus on whatever has taken their fancy at the moment.

Japanese Buddhists even believe (similar to Baset) that cats are guardians of spirits, carrying souls in the interim between death and reincarnation. They also believe that cats become protective spirits when they die, meaning your guardian angel could be your belove childhood cat.

With both their proximity to the supernatural and their earthly powers of hearing and sight, it’s no wonder that cats are able to detect ghostly presences that we can’t.

What’s more, there are also numerous accounts of ghost cats who make themselves known to their humans.

Bereaved cat owners have frequently reported the feeling that their beloved feline is still with them.

Though some say this is related to grief, that doesn’t explain stories of a kitty’s favorite toy being found in the middle of the living room, or the sensation of warmth on the bed where they used to lie next to you at night.

There’s no need to worry

Just because your cats sense things you can’t, this doesn’t mean that you have to be scared or concerned about their reactions.

Whether in modern-day or ancient Egypt, cats will always excel at taking care of us–even when we can’t detect what they think is a cause for concern.