Have you seen a dog staring at a blank space? Watching something move across a room and you look at see nothing yourself? Can dogs see spirits or ghosts that humans can’t detect with the naked eye?

In short, yes, we believe that dogs can see ghosts. It’s a phenomenon in countless stories. But we aren’t exactly sure how.

Note: For a variety of reasons I don’t recommend actively trying to take your dog ghost hunting. If they’re seeing something naturally, a ghost is unlikely to take much notice of them. I don’t advise actively trying to train them to spot ghosts in case that changes. If you’re actively looking for ghosts or spirits I suggest something a little more technical like an EMF reader anyway.

It’s exciting for us as humans to think that our beloved four-legged friends can detect unexplained presences. But, at least for me, I am filled with a deep appreciation for dogs because of their keen sixth sense.

Our dogs have such a keen sense of hearing, sight, and smell that it allows them to see or hear things we just can’t. Their sense of smell is up to 10,000 times more sensitive, depending on the dog breed. They can also hear at a much higher frequency than us, allowing them to pick up on noises we may never detect.

When it comes to a dog’s sixth sense as a way of connecting to the supernatural, animal behaviorist Marti Miller believes that dogs, unlike humans, will never deny what they are feeling.

This is because dogs do not judge what is happening with their environment the way humans do. For example, dogs are sensitive to the barometric pressure in the air and may react by panting or shaking.

A dog’s extraordinary senses also allow them to feel shifts in the atmosphere and detect movement. It’s almost as if they have a supernatural sense.

What Can Dogs See That Humans Can’t? 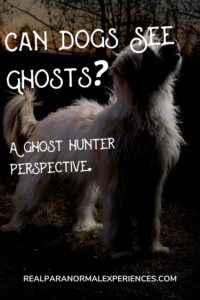 We now understand that dogs have incredibly heightened senses allowing them to see much more than we can. But what exactly and how does that pertain to the paranormal?

One of the most amazing this is that dog’s powerful senses allow them to see UV rays, meaning that their world is a lot bigger than ours could ever be.

A dog’s sense of sight allows them to see layers easily. For example, layers of paint in a painting or paint on the wall. This is because of their ability to see UV light. So is it possible that dogs can see layers in the veil that separates us from spirits?

Of course, it is delightful for anyone to stare up at the night sky and think about just how big it is. But we can only see so far. Our dogs can see so many more stars and celestial bodies in the sky than we could ever imagine. And again, does this mean that they can detect the same type of glowing light that may be reflected off of the paranormal?

Did you know that your dog’s superior senses allow him to detect the earth’s magnetic field? Anytime a dog goes to the bathroom, they line themselves up with the north-south axis because he can see the magnetic field. It makes you think about what other magnetic fields our dogs can sense.

I really didn’t have to do any research on this question to know the answer. We all know that there is good and evil in the world, not only in the physical world but also in the spiritual world. But for us, unless you are very sensitive to paranormal activity, it’s often difficult to tell the difference between the two.

But a dog’s keener senses allow him to pick up on the presence of evil in next to no time. And if your pup senses evil around, he will most often let you know by presenting with some pretty strange behavior.

You may see your dog growling, exposing her teeth, and going into attack mode. But yet, you see nothing out of the ordinary. Your dog may whimper or cower to try to hide. These are all negative signs that tell us our dogs are sensing the presence of evil.

Over the years, more research has gone into the behavior of dogs and how their extraordinary senses allow them to detect things we don’t see or feel, such as evil. Often the presence of evil can manifest as an illness or negative emotions, both of which dogs can pick up on.

I’ve heard more than one story about dogs and their ability to connect with 3 am. For those that don’t know, 3 am is the time when the veil between the living and the dead is at its thinnest and when evil spirits are most active.  Dogs have been known to awaken at 3 am and wander through the house, almost as if they are looking for something. But what?

And what about when dogs just stare at one spot, like the wall or maybe just the air. And they continue to stand and stare at nothing. It can be pretty eerie if you ask me. But that is a sure sign your dog is sensing something evil or not quite right.

They certainly can. In fact, our furry friends are very good at sensing negative energy, whether it’s from a person or in a room. You’ll notice your dog’s behavior will change immediately once their canine perception picks up on negative energy.

This is another one of the things that make dogs so incredible. Dogs have been able to sense death for centuries. There are even service dogs that work specifically in hospice.

Due to their acute senses, dogs can pick up on the sounds and smells that are often associated with the passing of a loved one. In fact, the ancient Egyptians believed that dogs could actually predict death.

Why Can Dogs See Ghosts and Spirits?

When it comes down to it, dogs are our everything. They are companions, cuddle bugs, protectors, the list goes on and on. And I suppose, in a way, that gets me to question why dogs can see ghosts. We know that there is scientific evidence that dogs are keen on picking up delicate movements and vivid images that the average human just can’t see.

But, why? We know that the animal kingdom fascinates humans, and there are many questions about why animals do what they do. But I would like to think that why dogs can see ghosts is due to their bond with us as humans.

A dog’s nature is to protect us. And that isn’t just from burglars. Dogs don’t understand the difference between a physical threat and a spiritual threat. All they know is, they are there to protect us from it, and I believe that is why they are so keen on picking up on those strange things that we just can’t.