Ghost encounters are some of the most fascinating occurrences on Earth. Acting as a thin tie between the mortal world and the unknown, ghosts are fascinating to study. However, if you’re involved in paranormal studies or are a ghost hunter, there is a common concern to address: Can ghosts follow you?

Ghosts can follow human beings, but it isn’t a common occurrence. Typically, ghosts like to haunt a specific locale–they usually aren’t concerned with following certain people as much as they are with staying in a certain place. However, it is still possible for these paranormal entities to decide they want to follow a specific person.

A ghost choosing to follow a human being isn’t common. Consider the colloquial phrase “old haunts.” This phrase is used to describe a person’s most frequently visited places. The phrase was coined from the idea that ghosts tend to linger around in the mortal world by staying in significant places they frequented while they were still alive, giving these spaces a ghostly presence. 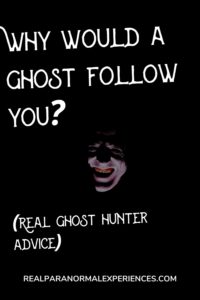 A ghostly apparition is usually a peaceful entity (although ghosts can hurt you). They may choose to “stick around” in the mortal world for a variety of reasons. For example, ghosts may choose to haunt a specific location because:

Typically, these types of deep emotional ties keep the ghost’s spirit from moving onward to a happy afterlife. Perhaps the ghost is too emotionally fraught to let themselves release their mortal existence. In some instances, ghosts are so concerned with sticking around in the mortal realm that they don’t even realize they’re dead!

It is worth noting that this isn’t typical ghost behavior. While it isn’t impossible for a ghost to decide they’re going to “tag-along” with a human in the mortal world, it’s certainly against the norms for ghosts to do so.

Can a Ghost Enter Your Home? 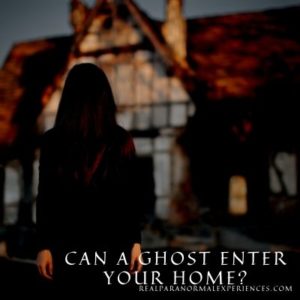 If a ghost is following you, it’s following you. This means you could potentially “invite” this entity everywhere you’re going–including your home.

There are some precautions you can take to prevent spirits of all varieties from invading your personal spaces. For example, you can protect your home from ghosts and other unwanted entities by implementing the following means of protection:

What Do You Do if a Ghost is Following You?

Ghosts (along with demons, angels, and other mysterious entities) are spirits. One of the best choices you can make when a ghost is following you is to seek professional help. Rather than turning toward internet-based assistance for your suspected ghostly following, seek professional help from an offline person who is trained to work with an otherworldly entity, such as a priest.

Sometimes, the mysterious otherworldly entity following you is a ghost. More often, it is something potentially dangerous. Seeking help from a professional ensures that you’re doing everything you can to detach the spirit from your mortal being before serious damage is done.

If (and I do mean if) you’re familiar with ghost hunting you could use a spirit box to communicate and just ask why they are following you.