The paranormal field is a strange and often unsettling one to explore, but is it as dangerous as many people fear it is? Can ghosts hurt you?

To put it bluntly, yes, ghosts can and do hurt humans that try to interact with them. This isn’t always done intentionally or even consciously, but can be incredibly terrifying to witness or experience.

The kind of harm a ghost is extremely limited. It depends on the kind of ghost they are, the form of energy they are made of, and the person being targeted.

Can Ghosts Physically Touch or Hurt The Living?

The answer to this depends entirely on the kind of ghost you’re dealing with. There’s more than one kind of life after death, after all.

There are certain kinds of ghosts who can interact with the world around them in a meaningful way, which can include physical paranormal activity focused on humans.

These ghosts have some level of sentience and are more tightly tethered to the living world. This means that they’re more likely to be actively spoken with via writing or visual apparition.

Can Residual Energy Hurt You?

Most ghosts encountered during investigations are either residual energy that repeats patterns they enacted in life or sentient but incorporeal negative energy that is trying to move on but can’t because their tether is still intact.

These ghosts are unlikely to be capable of physical interaction because of their weaker connection to this world. They’re passive observers, not active participants. 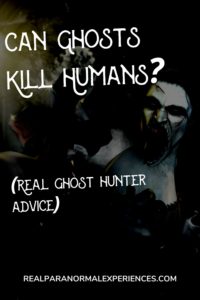 While it’s hard to give a definitive answer on whether or not any ghost might have the ability to kill a person, it’s safe to say that there has never been an actual proven case of someone being directly killed by a ghost.

Most ghosts lack the physical presence to do that level of harm. Even the strongest dark spirits have been limited to noisier but ultimately nonlethal interactions with the people around them.

It’s possible that a ghost, demon, or another spirit might possess a living person and commit murder, but this would have to be an extremely strong case of possession unlike any previously studied. Again, this has never been reliably observed.

In most cases, the reactions of people around the spirit are more dangerous than the spirit itself. Exorcisms can be deadly, and the fear of ghosts may lead humans to hurt each other by mistake.

You’re much more likely to be injured by a frightened person than a spirit intent on doing you physical harm.

How Can Ghosts Hurt You?

There are a select few – very rare – types of ghosts that can physically interact. These spirits – occasionally theorized to be demons rather than once-living people – may shove, scratch, or bruise a particularly sensitive victim.

The most direct and present danger that ghosts present, though, is mental and emotional trauma. Encountering any level of spiritual activity is enough to unsettle most people, as we all have an innate fear of the unknown.

On top of this, some people are more sensitive to their environment than others. These people are more likely to be affected by changes in energy around them to the point of taking on the emotions of others, including those of spirits.

That kind of conductivity can take significant mental energy and be extremely distressing to the human mind, especially for those with no experience or training in stemming the influence. It can cause lasting trauma that is worse than any physical interaction with a ghost. 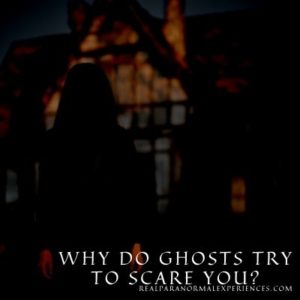 Why Do Ghosts Try to Scare You?

Ghosts are tied to the physical world for a couple of different reasons, from unfinished business to violent trauma. That tether can affect their feelings toward the living if they’re sentient.

A ghostly apparition may be tied to a particular place, and become extremely protective of it. If you are entering what a ghost sees as their home without their permission, they may attempt to frighten you into leaving.

Others may have deep-seated dislikes for certain kinds of people that remind them of their trauma. If you match the description of those people, the spirit may try to intimidate you into leaving, or may even mistake you for that person and attempt to seek revenge.

At the end of the day, the dead person might have their own, entirely unique, reasons so I doubt there’s one catch-all answer here.

Do Ghost Hunters Still Get Scared?

Ghost hunters, despite their years of experience, are still human. They do definitely still get scared of the spirits they encounter, especially if they’re dealing with other environmental factors.

David Schrader of the Travel Channel’s “The Holzer Files” says that what scares him more than spirits are the places they haunt. Often, ghost hunters will be more afraid of decrepit buildings and humans who might hurt them for being there.

Schrader does mention, though, that most ghost hunters will immediately drop investigations where it’s suggested they use an Ouija board. “You’re asking something to use you as a puppet,” he says, “I would never open myself to it.”

Any ghost that can interact with a person through channeling presents the danger of emotional trauma that may lead to physical danger. Channeling is extremely risky and may open a person up to unwanted communication.

Which Types of Ghosts are Dangerous?

The most commonly known “dangerous” ghost is actually one of the least commonly spotted: poltergeists. These are the most popular antagonists in a fictional ghost story and are just as frightening in the real world.

Literally meaning “noisy ghost,” poltergeists may or may not be sentient of their actions, but the negative energy they’re made of will express itself as slamming doors, falling objects, or even fire.

Ghostly encounters featuring poltergeist activity may include scratching, pushing, or screaming to leave, though most hunters are still willing to stay and investigate.

The Spirits Most Hunters Won’t Face

Although not technically a form of “ghost,” another dangerous spirit to encounter is a demon. Believed to be powerful extraplanar beings, demons seek to control and manipulate humans for their own purposes, often to cause physical harm.

Demons feature in most major religions around the world and are almost always depicted negatively. The name has become synonymous with darkness, evil, and temptation. Those who believe they’ve encountered demons aren’t quick to return to the activity sites.

Even the most experienced investigators will often leave any ghost encounter they consider to be associated with a demon.