Whether it be a heavy hand on your shoulder when no one is there or a cold finger down the back of your neck, the potential touch of a ghost can leave anyone feeling shaken. For someone unfamiliar with paranormal experiences, the idea of a ghost’s touch can be terrifying. So, can ghosts touch you?

What Kind of Spirits Can Touch You?

There are a number of different types of ghosts, and every type of ghost has a preferred method of making itself know. Most ghosts rely on things like the cliche bump in the night or appearing as a spectral figure., but others have more obvious, more chaotic ways of appearing.

Ghosts like poltergeists regularly move and affect aspects of the physical world with touch. Poltergeists aren’t always malevolent spirits, but their sometimes violent movement of objects and rough touches can certainly make them come off as evil spirits and not friendly ghosts.

Poltergeists are a favorite of ghost hunters, since their method of manifestation, altering the physical world visibly, makes them much easier to observe than quieter types of ghosts like spirit orbs.

Poltergeists often have what is called a “focus person”, which is a person that the haunting activity seems to connect to. A poltergeist will put extra effort into interacting with the chosen focus person, making this person more likely to be touched or spoken to.

If dishes are flying, cabinet doors slamming, or ghost footsteps echoing in the night, then you might have a poltergeist on your hands!

Traditional interactive ghosts can also touch people, but in much more subtle ways that may go unnoticed by the ones the ghosts seek to interact with. The human body and mind are more likely to brush off a soft touch or sudden chill as a drafty window rather than immediately jumping to a ghostly presence. If a ghost is following you, it’s likely this.

These traditional ghosts are sometimes aware of their situations and try to reach out, but often they have no idea they are dead, simply repeating the same action over and over again.

If your traditional ghost is just repeating an action from their life over and over, they won’t seek to touch you, but if you interrupt or are in the way of their repetitious action, you can still potentially feel them on or around you.

These repetitious actions are things the ghost may have constantly done while alive, and even in death, the instinct to follow through with these actions persist.  If a ghost always lit the fireplace in the evening, and you happen to be in front of that fireplace when the spirit goes to light it, you may feel their spectral touch.

The third type of ghost that can physically interact with a human is a demon. Demons, unlike our aforementioned ghost types, are actually malevolent spirits that mean to do their host harm. Demons are associated with the Christian devil and seem to take control of the person they are haunting. This is known as possession and is a traumatic experience for the possessed.

Demon possession is an example of a ghost touching someone in the worst way possible. Not only does the possessed person feel the presence of the demon, but they will also soon feel the demon all throughout themselves.

Demons crave hosts to possess but can be removed by an exorcism. If you feel like you or someone you love is being possessed by a demon, use caution. These are not paranormal entities to take lightly.

Why Would a Ghost Touch You? 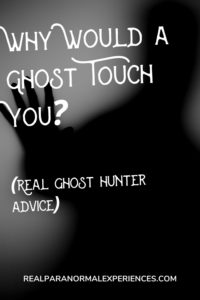 When asking the question of why would a ghost touch you, you need to determine if the touch is meant to be intentional or if it was unintentional in nature.

There are numerous reasons a ghost may touch someone in the living realm, but the three most common are to make themselves known to the living person, unintentionally touching a living person in the course of their haunting, or in rare cases, possession.

Intentional Touch by a Ghost

If a ghost is touching someone on purpose, there will almost always be a reason. A ghost needs energy to manifest itself and using this hard-earned energy to touch someone exhausts quite a bit of that energy. It isn’t something a self-aware ghost would do for no reason.

A ghost touching someone can be a way to gain the attention of a certain person, maybe someone that meant a lot to them during their lives. Ghosts who have recently passed from the mortal coil are the biggest culprits of these ghostly caresses.

Touches like this aren’t to be feared. In fact, if you have a good idea about which spirit is reaching out to you in this way, it can be a comforting gesture to you from a loved one who is no longer in this world. These moments are meant to be cherished.

Another sort of intentional touch by a ghost is when a ghost is pushing, shoving, or pulling hair, among other things, to annoy the person or persons being haunted. This is a classic move by poltergeists.

Ghost hunters have found that a lot of times, poltergeists are the ghosts of previous owners of the homes they are haunting. These poltergeists will do what they can to terrify and annoy the current homeowners to drive them out.

While not usually harmful, poltergeists can be frightening to experience!

The third type of intentional touch is possession. We discussed possession in the above section under Demons, but to put it shortly, possession is the intentional possession of the body of a living person by a supernatural entity, usually a demon.

Not only are these sorts of touches intentional, but they are also dangerous and harmful by nature. Consult with professionals when dealing with supposed demon possession.

Unintentional Touch by a Ghost

Examples of this are when someone is standing in the path of a repetitious ghost who repeats the same action over and over again. The ghost will pass right through them, unaware of their presence, to finish their action.

The living person may feel a cold touch or feeling pass over them along with the ghost, even if the ghost isn’t visible at the time.

Another example is when a living person is present during a large-scale ghostly event playing out. Ghost hunters have reported being able to witness whole battles playing out on civil war battlefields.

If one was to stand in the middle of these battlefields during a paranormal replay of these battles, they could definitely feel the ghosts passing through and around them, as well as the paranormal miasma in the air from such a large scale haunting.

Ghosts can touch the living, whether it be intentionally or unintentionally. Ghosts rarely mean to cause harm, but in some rare cases, the ghosts can be malevolent. If it really comes to it ghosts can hurt you.

As with any paranormal research or investigation, use caution when dealing with the spiritual world and remember to be respectful of those who have passed on. Who knows, you may receive a pat on the back from a ghost!