Dowsing rods, also commonly referred to as divining rods, are common tools used for detecting the presence of nearby spirits. They’re also used as a communication device for the common practice of talking with spirits. Although the original purpose of dowsing rods had little to do with detecting otherworldly spirits, they’ve morphed into an important tool for ghost hunters.

Important note: Dowsing rods are considered a spiritual means of detecting and communicating with ghosts. If you want something more scientific which you’ll see paranormal investigators using more often, take a look at spirit boxes instead.

What is a Dowsing Rod?

Today, dowsing rods are most commonly made to resemble two identical L-shaped structures. The short ends of the L shape are held in the hands like handles. A dowser will hold one rod in each hand as they walk across a stretch of land. When the rods detect something significant underground, they will begin to move.

When dowsing, these two L-shaped rods will cross over each other to indicate that you’re close to something significant underground. For example, in the event of finding an existing water pipe, the rods may extend in opposite directions to indicate the direction the pipe runs.

Dowsing rods are made of a variety of materials, including wood, steel rod, solid copper material, and other non-copper material. When you’re walking with a set of dowsing rods, you can focus on what you’re searching for underground. The rods are a sort of conduit that connects your energy to the energy of what’s hiding under the earth.

Yes, anyone can use dowsing rods, but how the rods react is based on each individual’s practice and openness to the process.

And believe it or not, water companies often use dowsing rods to find burst pipes or leaks. Although much embarrassment may have come to technicians after realizing their methods may have been used in the past as a part of witchcraft!

But are water companies really using these rods to contact spirits or to tap into water problems? Most are probably unaware of the history of dowsing as an occult practice, so it’s safe to say that the water companies are most likely interested in searching for leaks in pipes and not the spiritual world.

A Short History of Dowsing Rods

The concept of using dowsing rods to locate hidden or missing items underground has existed for thousands of years. Dowsing rods made from either sticks or bits of metal were used in ancient practice to detect all sorts of obscured, underground objects, such as sources of water, hidden treasures, and ore.

In the 16th century, the idea of dowsing became taboo when members of the church declared it to be a satanic act of occultism. At this point, people who depended on dowsing for water switched to Y-shaped sticks that could be found in nature and then easily destroyed afterward to hide evidence.

This dowsing practice is still used today. For example, farmers in California will request help from professional dowsers to help find new sources of water on their land. Some treasure hunters swear by dowsing rods’ gold finding capabilities. There are even dowsing enthusiast groups who enjoy meeting up to practice the art of dowsing for treasure and other hidden underground curiosities.

Since dowsing rods depend on connecting with hidden or obscured energies existing within the hidden objects to work, they quickly became popular tools for finding and communicating with spirits. Since spirits are obscured, communicating via dowsing rods became a popular method of speaking to them. 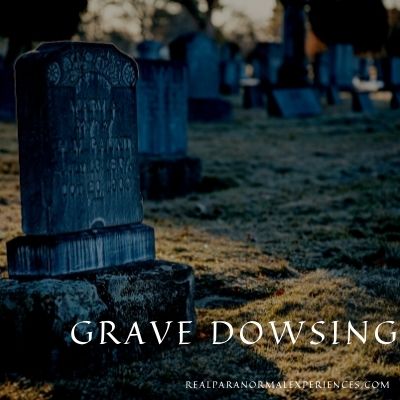 Grave dowsing is a popular use for dowsing rods. Dowsing for graves involves using the activity of dowsing to specifically locate gravesites and buried bodies.

Grave dowsing is one of many methods for detecting unmarked or makeshift gravesites. For example, older cemeteries may have lost headstones over the years, resulting in unmarked graves that have been lost on the property over time. 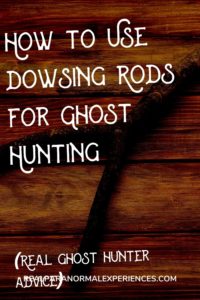 In more serious terms, grave dowsing is a method for finding hidden bodies. A murderer may try to bury a body to hide the evidence of a violent crime, but grave dowsing can help detect where the hidden body was buried due to the energy fields the buried body interrupts.

How to Use Dowsing Rods for Ghost Hunting

To use dowsing rods for ghost hunting, you’re going to focus your energy and questions on the environment around you rather than what’s under the earth. Just like with typical dowsing, you’re looking for interruptions in the electromagnetic fields and magnetic fields around you.

Begin by bringing out your dowsing instrument and settling into a comfortable spot in the room. To encourage a potential ghost to make itself known (and to wake up its energies to communicate with your dowsing rods), begin by asking some simple yes or no questions.

Dowsing for ghosts to communicate might be a little too much for a beginner ghost hunter (there are certainly better ways to communicate with ghosts). If this is the case, remember that ghosts release a lot of energies without needing to communicate. While exploring through a suspected haunted location, hold out your dowsing rods and pay attention to the way they move. In a particularly high-activity area, you may see and feel them moving more due to the presence of spirits.