In a horror movie industry flooded with cults, monsters, and aliens, there is one special subgenre that those with an interest in paranormal investigation will find the most entertaining of them all, and that subgenre is ghost hunting movies. Ghost hunters in movies can be intrepid newcomers or grizzled veterans of the industry, and the movies themselves can range from goofy to bone-chilling. So which ghost hunting movies rise to the top?

On our list of the best ghost hunting movies, we have gathered the scariest and most entertaining movies to crank up the fright factor for your next movie night. Don’t waste your time on boring, sub-par ghost flicks. Our list will have you on the edge of your seat and itching to go do some ghost hunting yourself!

If you want something a bit closer to reality there are a couple of ghost hunting shows that show the kind of things we actually do now.

What starts out as a dark, atmospheric haunted house movie turns into one of the best ghost hunting movies to come out in the last decade. The Conjuring features Ed Warren and Lorraine Warren, real-life infamous paranormal investigators that come to help a family banish an evil spirit from their new home in Harrisville, Rhode Island (I’ve actually covered the real Conjuring house recently).

During their heyday, the Warrens claim to have investigated over 10,000 hauntings, and their biggest claim to fame was their investigation of the Amityville murder house. Pretty good credentials, right? The fictional version of the couple appears in all of the movies in The Conjuring sequels, but the first is still the best in our opinion.

There aren’t any cheap scares or cheesy ghosts, just a deceptively slow-burning haunting that grows wildly out of control. Based loosely on the true story and actual people, The Conjuring is a quality film from start to finish that will stick with you for days to come.

A gory, fast-paced remake of the 1960s original 13 Ghosts, Thirteen Ghosts switches things up by turning who is the protagonist and who is the antagonist upside down while being absolutely crammed full of bloodthirsty ghosts. 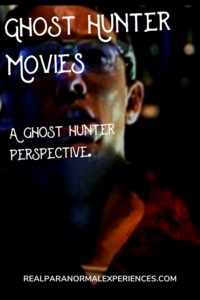 The story follows an unwitting father Arthur and his family as they go to tour the ridiculously haunted house that his deceased ghost-hunting uncle, Cyrus Kriticos, left to him in his will. When will these people ever learn?

Each of the eponymous 13  ghosts has its own unique story and personality, and they are all driven by the painful memories of their deaths and their eternal imprisonment. The ghost’s backstories are almost as interesting as the movie’s main plot, sometimes even more so.

This movie has it all. Wacky ghost-powered machines, cocky ghost hunters, and tragic loved one’s trying to save their families from beyond the grave. Don’t miss this over-the-top ghost-hunting remake!

Setting the bar crazy high for horror movies featuring ghost-hunters, Poltergeist is one of the most well-known names in horror movies. It’s considered one of the best for a reason!

Little Carol-Anne and her family move to a new housing development that was built on the location of a former ancient cemetery. Terrifying events follow, and when Carol-Anne is abducted by the poltergeist, the family calls in the big guns: Ghost hunters and parapsychologists Drs. Martha Lesh, Ryan Mitchell, and Marty Casey.

When the ghost hunters can’t get the job done, the group turns to Tangina Barrons, a spiritual medium, to help recover the lost child.

With spine-tingling visuals and a threat that doesn’t let up until the very end, Poltergeist is an award-winning romp through the paranormal that has haunted moviegoers for generations.

Starting out as a family-driven psychological thriller, Insidious dips into demonic possession and astral projection pretty early on but still manages to ground itself in reality enough to be believably scary.

Insidious opens with Josh Lambert, played by Patrick Wilson, and his family moving into a new home as so many ghost movies do. When their son Dalton falls into a coma and house guests see an unsettling figure in the shadows, the family suspects something of supernatural origin.

The family calls in psychic Elise Ranier and paranormal investigators Specs and Tucker to help bring their son back to his physical body. The film gets a little more out there as it goes on, with Josh finding out he can astral project, but it sits at the top of many lists of the best horror movies of the last few decades.

Check out Insidious if you’re in the mood for some ghost hunting and beings of pure evil all in one movie.

Of course, no list of ghost hunting movies is complete with Ghostbusters. It’s unlikely that Ghostbusters is a new movie for anyone, but if you somehow haven’t seen it before, then you are in for a treat. This isn’t a cliched horror film, it’s the number one ghost hunting film of all time.

Before they were the main characters in a multi-billion dollar franchise, Peter Venkman, Ray Stantz, Winston Zeddemore, and Egon Spengler were humble parapsychologists and paranormal investigators. They were the only ones to call when you needed to get rid of some dead spirits.

Hysterical, spooky, and bizarre, Ghostbusters probably will give no one nightmares, but if you’re into ghost hunting, then this is the holy grail.

3 horror films and 1 comedy round out our list of carefully curated movies that focus on ghost hunting. The ghost hunters in these movies range from inept and evil to professionals that save the other characters from the supernatural.

These four films are wildly different from one another, but they will all scratch the itch to see some professional paranormal investigators in action. So grab your popcorn and your Ectocooler juice boxes and enjoy our four favorite ghost hunting movie picks.