In media, ghosts are usually associated with cliche “boo’s!” and “Oooohs”, but in reality, ghost noises are much more nuanced. There is no script when it comes to paranormal sounds. Each encounter will sound different, and be special in its own spooky way.

Ghost noises vary drastically from ghost to ghost, and from encounter to encounter. The same ghost won’t always make the same noises, so it’s important to be familiar with the meanings of all of the common ghost noises so you can experience your paranormal encounter to the fullest.

What Sounds Can Ghosts Make?

A ghost is a remnant of a person, so it’s no surprise that the noises a ghost can make are similar to those of a living human. Kocks, taps, screams, and cries have all been reported by ghost hunters, as well as the crashing noises associated with poltergeists.

The sounds that a ghost can make are unique to the specific ghost you are listening to. Below we will discuss some of the most common ghost sounds, and what these sounds mean.

Everyone has heard a ghost story involving knocking. Ghost knocking has been the calling card of many disembodied spirits since the beginning of recorded paranormal research. So, why do ghosts knock?

We talk a lot about spirit or ghost manifestation, and how the more obvious and complicated the manifestation is, the more energy it takes. A ghost making themselves seen is no small task. Occasionally, a ghost can be desperate to communicate but lack the spiritual energy to visually manifest.

In that case, ghost knocking can come in handy for the spirit. Being a noisy ghost takes much less energy than being a visible ghost. If a spirit desires your attention, you may hear their knocking quite a lot. Just like other paranormal activities, spirit knocking is simply a way for a spirit to get the attention of the living.

Superstition is abounding when it comes to the number 3, and hearing 3 ghost knocks is no exception. The number 3 is associated with evil, meant to be a mockery of the holy trinity.

With this being said, what does it mean when you hear 3 knocks that seem to come from nowhere? Well, the answer isn’t a pleasant one. 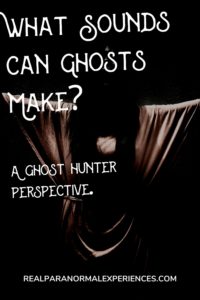 Hearing 3 knocks is a harbinger of death. It is said in the superstition that when someone hears these three phantom knocks, someone under that roof will die within a week.

The old ghost story of the banshee tells of a particularly noisy ghost that would haunt the families, screaming their awful banshee scream into the air during the night. Their screams were said to foretell the coming death of someone in the home, and their awful keening would set everyone on edge for days.

A banshee was said to be a woman that died in childbirth or one who was murdered, either way, unable to let go of their grief and anger. Because of these strong lingering emotions, the woman’s spirit would become a banshee.

Like the origin story of the banshee, a person that died violently may attempt to return to the living world with violence all of their own. When these people died, they had lost control of the situation and could only scream, so what better way to make the living acknowledge them than screaming once again?

A ghost scream can frighten someone to their bones, but even a screaming ghost is most likely harmless. They are just forcing the world to bear witness to their sorrow and pain, however tragic that may be.

Chances are that a crying ghost lived or died in sorrow, and their crying as a ghost is the residual haunting of this overwhelming sadness.

Maybe these ghosts mourn the loss of a beloved husband or child, or maybe they died way before their time and they lament the life they did not get to live. Either way, a crying ghost isn’t usually an intelligent one looking to communicate. Instead, it is the echo of sadness left in the living world, acted out periodically by the spirit of the one that suffered most.

Unlike the crying ghost that is simply reliving its misery with each haunting, a tapping ghost may actually be trying to communicate.

When seances became popular, it was common for the seance leader to communicate with the summoned spirit with taps, usually 1 tap for yes, 2 taps for no. This system of communication is deceptively simple. With just a few taps, you could be having a real back and forth conversation with a spirit!

Evidence of communications via knocking has been recorded for decades. If you wish to communicate with a tapping ghost, be ready to record your answers and have a list of the questions you wish to ask so everything goes smoothly. This is an opportunity you won’t want to miss!

Another form of a residual haunting, ghost footsteps are evidence of a ghost that is comfortable in its home and is just retreading the steps that it had taken during its life, over and over again.

Like most residual hauntings, ghost footsteps are not harmful. They are just an echo of a habit from a soul long past.

An interesting note on ghost footsteps is that there are quite a few claims of spirits’ footsteps only showing up after a significant renovation as if the spirit had been sleeping but was awakened by the commotion. It may be a good idea to ask for the ghost’s approval regarding the changes to their home!

What Are The EVP Sounds?

EVP stands for Electronic Voice Phenomenon. This phenomenon occurs when audio recorded with audio recording devices and is found to have the words and voices of spirits when played back. These voices aren’t heard in real-time, only when the recording is played back later.

There are multiple different ways to go about recording EVP, ranging from cell phone recordings all the way up to spirit boxes that were tailor-made to record EVP (you can find examples on my ghost hunting equipment list)

This audio usually has to go through some editing to make the words more clear. There are also times when the recording must be slowed down or sped up for the voices to come through clearly.

Of all the examples of ghosts being recorded in one way or another, the sound of a clear and concise EVP is one of the most impressive and emotional. Hearing the voice of someone from the other side is chilling and can be one of the most profound moments of any paranormal investigator’s career.

Ghost noises, just like noises made by their living counterparts, are all unique. They can be frightening or exciting, but no matter what, it’s a good idea to listen closely when a spirit is trying to make itself heard.

Whether your spirit sounds originate from an EVP recording or Ouija session, refer back to our list of ghost sounds and decipher the message being sent to you! Who knows, it may be someone you’ve been waiting to hear from for a long time.