Is Abraham Lincoln’s spirit still moving among us? Yes, say the many who claim to have seen the spectral former president firsthand.

From ghost-hunting groups to Prime Ministers, ghost sightings of Abraham Lincoln have been reported by people from a wide variety of backgrounds and beliefs, which lends a certain measure of credence to their tales.

One place Abraham Lincoln is still said to haunt is Springfield, Illinois, the town in which he was born and buried. In fact, the earliest sightings of Lincoln’s spirit were reported soon after his burial at Springfield’s Oak Ridge cemetery, following his assassination in 1865.

In addition to the cemetery, the courthouse, law offices, and the old state capitol building in Springfield are also rumored to be haunted by the sixteenth President’s ghost. 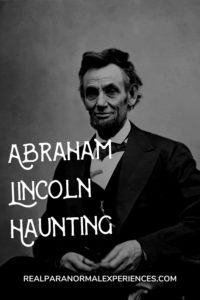 Another location where Lincoln’s spirit is said to roam is Ford’s Theater in Washington, D.C. This is the place where Lincoln met his death by assassination at the hands of John Wilkes Booth, a stage actor.

Witnesses have reported hearing gunshots, screams, and footsteps in the theater, and sightings of Lincoln’s ghostly apparition are said to happen fairly regularly at the Petersen House which lies across the street. Though shot at Ford’s Theater, Lincoln actually died at the Petersen House.

Some of the most famous reports of Lincoln’s ghost come from the White House. Personalities as well-respected as First Lady Grace Coolidge and British Prime Minister Winston Churchill claimed to have had a run-in with the former president while staying at the property.

When staying at the White House on a visit, Winston Churchill claimed that old Abe caught him in his birthday suit, stark naked having just emerged from a bath. The Prime Minister said that he saw Mr. Lincoln sitting in a chair near the fireplace.

The Oval Office and Lincoln’s bedroom seem to be among Abe’s particularly favorite haunts. Once, Mrs. Coolidge had seen what appeared to be Mr. Lincoln gazing out a window in the Oval Office.

First Lady Eleanor Roosevelt also talked about sensing the former president’s spirit, describing how she would feel his presence sometimes when she was up late working in the room that used to be Lincoln’s own bedroom.

Queen Wilhelmina of the Netherlands also claimed to have come face-to-face with Lincoln’s ghost. On a visit to the White House in 1942, she was awoken from her sleep in the middle of night by what sounded like a knock at the bedroom door.

She opened the door only to find the President’s ghost standing there, staring into her. It was reported that she fainted in fright.

It’s really no wonder that there are so many sightings of Abraham Lincoln’s ghost. It only makes sense that his spirit would not be at rest. Not only was he assassinated, he also had his tomb relocated or otherwise disrupted many times over the course of many years.

His coffin was exhumed and opened on several occasions, and at one point Lincoln’s body nearly fell victim to the threats of would-be grave robbers. In order to deter the robbers and throw them off the scent, Lincoln’s body was secretly relocated and buried deep in an underground labyrinth whose location was known only to a select and elite few.

Eventually, Lincoln’s son Robert insisted on encasing his father’s coffin within a solid block of cement, to be sure that any future attacks from grave robbers would be prevented.

Shamans, spiritualists, occultists, and mediums alike teach that if the dead suffered a violent or untimely death, or if they aren’t put to rest properly, it increases the chances that the spirit will become “earth-bound,” which is to say that the soul is trapped in the earthly plains, unable to move on and forced to roam.

What if the many stories of ghost sightings of Abraham Lincoln are true? Perhaps the former president is still wandering around among us even in death, ever searching for the sense of peace for which he strove so hard to achieve in life.