The bright, coastal city of San Diego is most known for its pristine beaches, lush urban green spaces, as well as its world-class zoo and aquarium, luring travelers from all around the world to enjoy its many attractions.

But behind this sparkling facade, San Diego has a darker side: it’s home to several haunted houses. The Davis-Horton House, Robinson Rose House, and Whaley House are the most haunted homes with haunting histories that the city has to offer.

Formerly known as the William Heath Davis House, San Diego’s Davis-Horton house was completed in 1850 and has the honor of being the oldest standing structure in the downtown area.

Named after William Heath Davis, who first tried developing “New Town”, now downtown San Diego, this house and five others were shipped from Maine to San Diego by Davis and erected there.

The last residents of the house were the Lanuza family. But in 1977, they donated it to the city on the condition it only be used as a museum. 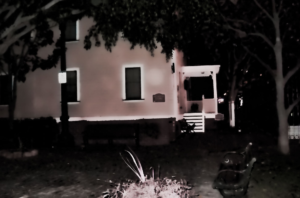 Though it currently houses the Gaslamp Quarter Historical Foundation and museum, it’s seen a lot of life, passing through many hands until the Lanuza’s decided it was better not used as a home.

From business mogul Horton to a World War II German spy, there’s never been a shortage of interesting people under its roof–which probably accounts for the abnormally active spiritual residents.

The aforementioned spy is possibly among them: reports of a very angry-looking man in a 1940s military uniform have been documented. The theory is that it’s a residual haunting created by the double-agent on the eve of his capture and execution shortly thereafter.

Davis House was also at one point a hospital and medical clinic, which may account for the vision of a woman wearing a long, Victorian-style dress and small cap, similar to those nurses wore.

A more alarming female figure, dressed entirely in black (including a black veil), has been seen wandering the grounds, but no contact has been made.

One of the most heard but never seen ghosts is a cat. Visitors and staff alike report hearing meowing and feeling something press against their legs. No one knows the origin of this spirit, but it’s said to be the friendliest and most beloved by historical society staff.

No one is actually sure how many hauntings and of what type are going on in the house: ghost-hunters and paranormal academics alike have recorded electronic voice phenomena that included the voices of adults, laughter of children, and the meows and purrs of the friendly cat.

Luckily visitors are able to take tours of the home and attempt to hear these strange noises and voices for themselves.

This grand home may look like it’s from the 1800s, but it isn’t actually the original house erected by James W. Robinson, a Texas émigré who came to San Diego with his wife Rose in 1850.

The original, built in 1853, was ravaged by fire in 1874 and after falling into ruin was demolished less than fifty years after its construction. Before then, it saw a lot of action. The house had been everything from school, medical office, jail, to the newspaper office.

In 1987, historians began excavating the site and uncovered the original footprint of the home. A couple of years later, California State Parks decided that the house should be rebuilt and it now serves as a visitor’s center

Because this house isn’t the original, it may come as no surprise that the hauntings don’t appear to be very active or frequent.

The most common events have been the sound of a person’s footsteps, the activation of electric cars by unseen hands, and a number of female guests reported feeling as though their hair was being playfully tugged.

The strongest presence hasn’t been witnessed by many, but from time to time staff and guests will report seeing cloud-like vapors, which sometimes looked like figures in 18th-century clothes.

One possible explanation is that this is a ghost sighting of Robinson himself.

James W. Robinson died in the house as Judge James Robinson in 1857, having left a legacy of important contributions to the city and its culture. But it wasn’t all roses and laurels. It also included plenty of skeletons.

Several decades after his death, it was revealed that he was legally married to another woman, and abandoned her and his three children to come to San Diego. He didn’t even include them in his will, though they did eventually received compensation from his estate (over 30 years later).

Some theorize that Robinson’s attachment to his home was strengthened not just by his love of his home and the city, but by fear of judgment from whatever awaited him on the other side. 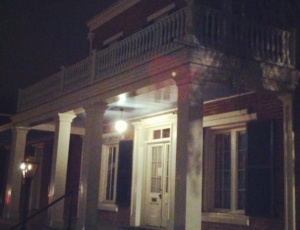 Knowingly built on the site of the execution of the notorious thief Jim “Yankee” Robinson, it’s obvious that this house never had a chance of remaining ghost-free.

Having personally witnessed the execution of Yankee Jim Robinson, but remaining completely unfazed, New York native and businessman Thomas Whaley purchased the land in the 1850s.

The house was finished in 1857 and made of bricks from his own kiln making it the first brick building in California.

Whaley and his family moved in and opened a general store downstairs and lived on the property off and on until 1885 when they finally moved closer to the town center for good.

If the execution of Yankee Jim brought death to the land, the arrival of the living Whaley family did nothing to change that.

Almost immediately after they arrived, the Whaley’s lost their 18-month-old son Thomas Jr. to scarlet fever. A few months later a fire destroyed the general store, and they moved to the city until repairs were completed.

The family returned in 1868. But in 1871, a violent home invasion occurred while Thomas Whaley was away on business. Armed men held Anna Whaley at gunpoint and stole courthouse records that were being kept in the home.

Later, the youngest daughter, Violet Whaley, was married in the home, to a man who turned out to be a con artist, only marrying her for the dowry he believed he would be paid upon becoming affianced to Violet.

During the honeymoon, her new husband ran off in the night. When she returned to San Diego, she was shunned by society and branded ruined. A year after her divorce was finalized, her isolation and desperation became unbearable and she killed herself.

Ghosts seen include Yankee Jim, Violet Whaley, and many as-yet-unidentified others, such as a small boy of six or seven in late 19th-century garb, and a beautiful woman looks as though she’s filtered through green glass.

The cries of babies sometimes heard by staff who have stayed late are thought to be those of Thomas Whaley Jr.

Though all of these haunted houses merit a visit, if you only have time for one, make it the Whaley House. The architecture, history, and sheer breadth of documented paranormal activity make it an unmissable experience.

If you have more than a couple of hours to spare, there are also a number of other haunted places and haunted attractions you can see as well.

You can visit a haunted sailing ship while enjoying the beautiful weather during the day, and walk the Haunted Trail by moonlight. If you’ve hit on one of the rare overcast days, check out Birch’s Haunted Aquarium.