Virginia, the place where America began in humble Jamestown. With that much history, including famine and war, there are bound to be haunted houses all over Virginia, right?

Full of some of America’s most historical places, Virginia is one of the most haunted states in the United States. All four corners of Virginia are home to dozens of haunted sites, and here we will go over the top two most haunted for each part of Virginia!

Located behind an intimidating fence in the town of Moundsville, West Virginia, the West Virginia Penitentiary has done plenty to earn its reputation as the most haunted prison in America.  The paranormal activity here is off the charts.

The penitentiary operated from 1876 to 1995, well into the 20th century, and is now only open for ghost tours and as a popular tourist attraction. This prison was the unfortunate site of over 100 executions, and if you take a tour now you can even see the electric chair where these executions occurred, aptly named Old Sparky.

All of these executions, paired with deadly riots, have made this penitentiary some of the bloodiest ground in the state.

When the Penitentiary is open to the public for visitation, intrepid ghost hunters have said to have heard phantom footsteps, see shadowy figures, smell mysterious aromas, and hear the desperate cries of old prisoners.

For a terrifying trip behind bars, you can find everything you need at the West Virginia Penitentiary.

One of the more popular spots to visit for a paranormal investigator, intrepid ghost hunters have also reported the sounds of galloping horses and visions of wounded soldiers staggering from the battlegrounds. 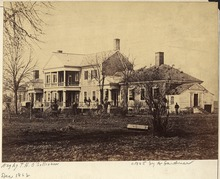 Chatham Manor in Fredricksburg, Virginia is the site of one of the more traditional colonial ghosts,  a classic Lady in White haunting. These specific types of ghosts tend to be the spirits of women who died in some way that is related to unrequited love, and the Lady at Chatham Manor is especially active.

Now a historical tourist attraction visited by thousands of tourists a year, the Chatham Manor and its Lady in White have a strange and tragic story, featuring none other than George Washington and his clandestine stay at the executive mansion at the same time as the lovely Lady in White.

The esteemed General Washington thwarted a plan of elopement between our Lady and her lower-class beloved, and heartbroken, she returned to the manor every year until she died, hoping to see her lost love. Shame on you George, what would Martha Washington think! 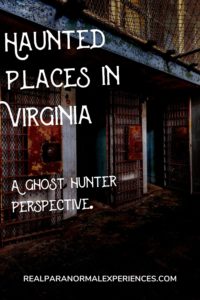 Visitors of the manor recall a woman in a white dress, weeping as she walked through the house, as well as apparitions of other colonial ghosts that haunt the grounds.

Originally the home of the founder of the town and original owner, William Ramsay,  the Ramsay House in Alexandria, Virginia is home to a number of colonial hauntings on its historic grounds.

The strangest thing about this haunted house is that it is also is Alexandria Visitor’s Center, and receives quite a bit of daily foot traffic. This doesn’t deter the stubborn spirits from making themselves know, though.

The strange occurrences began when the house was reconstructed to be as close to the original house as possible. It is said the ghosts that loved the house when it was first built had returned when it was returned to its former glory.

The colonial ghosts in the Ramsay House are notoriously helpful. These sweet spirits simply enjoy the views from their favorite window or help out the guests of the house in subtle ways.

If it’s a friendly ghost you’re looking for, look no further than Ramsey House. 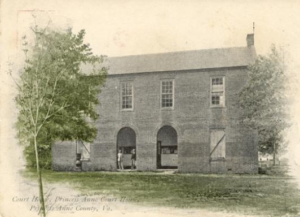 A smorgasbord for a hungry ghost hunter, the Ferry Plantation House in Virginia Beach, Virginia is stuffed to the brim with ghosts.

If you’re an exceedingly lucky paranormal researcher, you may even see the legendary Witch of Pungo. Keep your eyes peeled!

At the Edgewood Plantation, you don’t have to settle for a quick run-in with the supernatural. In fact, you can have a spooky sleepover with them!

You see, the Edgewood Plantation is now the Edgewood Bed and Breakfast. The current owners have flipped the expectations of haunted houses from something to be feared to a comfortable place to spend an evening.

The bloody history of the Plantation is rumored to be full of suicides and Civil War ghosts, but its most famous resident is Elizabeth Lizzie Rowland, fiance of a Civil War General who was sadly killed on the battlefield.

Elizabeth died of a broken heart when she heard the terrible news, locking her mournful spirit to the house forever.

Enjoy a lovely breakfast with a side of the supernatural at Edgewood Plantation in Charles City, Virginia.

A bit different from most of the haunted houses on our list, Crawford Road in Yorktown, Virginia, is considered to be one of the most haunted country roads in the state.

Residents of Yorktown loathe Crawford Road, avoiding it when they can. The area around the road and unsettling concrete bridge were the locations of many terrible hangings in the mid-19th century, and it’s said that a cabin deep in these woods has a pair of red eyes that watches you as you approach.

The most notorious of the hauntings is that of a young woman that hanged herself off of the aforementioned bridge. It is said that you can see her ghostly specter swaying from the bridge late at night.

This road isn’t open to the public for visitation or ghost hunting, just the normal traffic passing through.

Oh, and of course, like any good haunted road, your car can lose power, too.

This historic mansion, which moonlights as one of the more popular haunted houses during September and October, stands out from its Halloween-y counterparts by being one of the few actually haunted houses.

The Graham Mansion was first built by Joesph Baker on a 2,000-acre plot, who was subsequently murdered with an ax by his two slaves, Bob and Sam.

It was later bought by a Squire Graham, who would become the father of Major David Graham, who the manor was named for. Major Graham was a Confederate General, and hosted many war meetings in his aptly named “Confederate Room”.

Dastardly things must have happened in that room of the executive mansion, as ghostly activity and mysterious footsteps have been reported there.

Other strange happenings are blamed on a small child named Clara, who died under the tutelage of Major Graham’s sister in the 19th century. Clara is said to wander the home, leaving cold spots as she goes.

Whatever the truth is about this 2,000-acre parcel that became a piece of United States History may be, it remains one of Virginia’s most haunted locations, full of colonial ghosts.

Whether you’re in the mood for haunted houses, a tragic Civil War burial ground,  or an old makeshift hospital with a bloody past, look no further than Virginia for all of your paranormal needs.

There is something for everyone in every corner of Virginia, so don’t wait, head over and get some ghost hunting done. Just don’t get too scared!