Do you hear footsteps walking the stairs when you know your the only one home? Have you ever heard voices when no one was around? If you have ghosts lurking around your home you are probably eager to speak with them to find out who they are and what they want. You probably want to know how to communicate with ghosts.

There are many popular ways used to communicate with ghosts today. Some of the more common practices include EVP devices like recorders and ghost boxes, flashlights, or other lighting sources, and talking to them through 3rd parties such as the Ouija Board.

Now that more people these days are giving credit to the existence of the paranormal, many forms of technology have been designed to aid in better quality conversations with the dead. Thanks to this increase in interest communication can be possible from your very own home.

A lot of the tools and techniques (which we’ll get to in a moment) can give false positives. It can pick up disembodied voices from the radio, electrical faults in the lights or just our brains playing tricks on us. Sometimes you might also just pick up a word or two from a ghost who can’t keep a full conversation going.

How we spot real communication with ghosts is when we get a string of intelligent responses. If you watch any paranormal investigator they’ll often disregard random noises until it starts to make an intelligent string of responses to your questions.

It doesn’t always seem to be 100% clear English. Words can be a little disjointed and it’s not often like having a conversation with a living person but you should be able to see some clear patterns and the answers will make sense. Sometimes you might have to take it in the context of the entire conversation but they shouldn’t just be random words.

That’s when you know you have a real line of communication.

If you’re serious about trying to communicate with the dead, you’d be best served using something like this and I’ve covered them in the past. If you’re really looking to get into ghost hunting then your first stop should be a spirit box. This is is the easiest way to do actual communication with spirits by allowing them to use the nearby radio waves.

How to Communicate With Ghosts in Your House Without Equipment 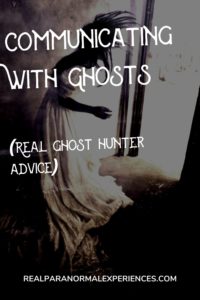 If you suspect there’s a ghost in your room (or you’re purposefully looking for one elsewhere) you don’t need to get actual ghost hunting equipment.

Sometimes the spirit will have enough energy to just speak to you (although this is rare). It seems to take a lot of effort for this kind of communication which is why most accounts are short-lived and sporadic. There are a couple of ways you can give attention-seeking spirits an easier path to communicating with us.

Way before scary movies like “Ouija” and “The Exorcist,” The Ouija board was being sold in novelty shops out of Pitsburg Pennsylvania for $1.50, it was a board game that was not only fun for the family but also had magic powers that helped you communicate with the dead.

Jump ahead a few decades later and following the civil war, women were convinced that they could use this “talking board” to communicate with the husband, sons, fathers, and brothers they lost to battle, after being “authenticated” through an experienced medium. People started to truly believe the power of the board, and do to this day.

If you feel your home has a ghost in it, you can use this board to find out what they want.

How to Communicate With a Ghost Using a Flashlight

If you have ever watched Ghost hunting shows on television. You have more than likely seen paranormal investigators using flashlights as a means of communication with ghosts.

In these clips, you can see the ghost hunters sitting in a haunted location asking ghosts to answer their questions by flipping the flashlight on for yes, off for no.

Flashlights are used as a form of communication because they are simple. It is believed that ghosts have very little strength in the world of the living. A simple on and off switch with a flashlight provides an easy way to speak with someone no longer alive. 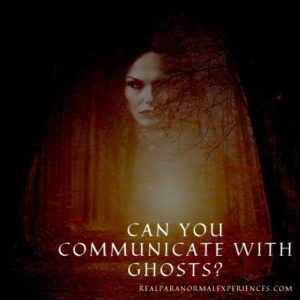 Can Ghosts Communicate Through Phones?

If you are interested in the paranormal, (which if your reading this, you probably are.) You may have wondered at some point in time whether or not you can communicate with the deceased through your cell phone.

Ghosts have been known to speak through electrical devices on many different occasions. EVP or Electrical Voice recorders are used often while trying to speak to a ghost.  That is because it is believed ghosts are able to use electricity to break the boundary between our world and theirs.

However, because the voices of the dead are oftentimes extremely low. It is very hard to hear them clearly if you were to record them through a phone, or if you are trying to connect with someone through a call.

If you are committed or interested in trying, there are many apps you can purchase on your smartphone that offer spirit boxes that may or may not capture audio of a ghost.

To use these devices you simply ask the spirit a question with the recording turned on and hope you get a response. Sometimes people can hear specific responses at the moment, other times they hear the answer on their phones when they play back the conversation at a later time.

Can Ghosts Communicate Through Our Dreams?

Dreams are one of the most common forms of communication for people who make claims of speaking to the dead. Most of these encounters are with loved ones who come to visit you while you sleep. Many people believe that when a spirit comes to you in your dreams, they have unfinished business to attend to.

A ghost may visit you in a dream simply to say a proper final goodbye, to tell you the truth about what happened to them when they died, or even secrets about what went on while they were living. Although, many times they simply visit just because they want you to know they are okay, and to let you know they are always with you.