In this review today we will be discussing the Mel Meter, specifically the Mel Meter 8704r. Unlike other common tools of the trade, the Mel Meter is made specifically for paranormal research. Does this tailor-made tool exceed expectations when compared to its multi-use counterparts?

With a strong 4 1/2 star rating on Amazon, the Mel Meter 8704r succeeds in its mission to be an all-in-one tool for professional and amateur ghost hunters alike. Its key feature is its ability to read to AC Electromagnetic Fields, but it also has a few other tricks up its sleeve that make it a worthwhile addition to the gear of the space-saving ghost hunter.

It doesn’t often make my ghost hunting equipment kit list but if you’re only going to get one piece of equipment, the Mel Meter is a good swiss army tool of paranormal investigators.

The creation of the Mel Meter has a tragic yet uplifting origin story. Its inventor, Gary Galka, experienced a terrible loss when his 17-year old daughter died in a car crash. Galka was devastated but claimed he could always feel his late daughter, Melissa, with him, and he wanted to find a way to reach out to her.

Thus he created the Mel Meter, a first of its kind in paranormal investigation tools.  Ghost hunters had always used tools like sensitive infrared thermometers and EMF readers that were made for use around power lines. 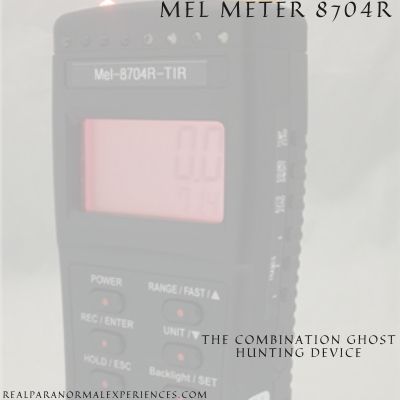 These tools worked, but they weren’t carefully calibrated for paranormal research and could end up being very pricy and bulky to travel with. They were simply tools made for something else entirely, that happened to be able to moonlight as a ghost hunting apparatus.  Not so for the Mel Meter. This handheld device was made specifically for ghost hunters.

The 8704r is the base model of the Mel Meter. The more costly versions of the Mel-8704 meter feature other functions like expanded storage capabilities and thermal infrared detection.  The Mel-8704r is described as the model for beginning ghost hunters.

The origin story of the Mel Meter certainly tugs at the heartstrings, understandably so, but how does the digital device actually perform?

The meter is small enough to comfortably fit in your hand, and the backlit display is bright and easily readable. It uses a red backlight to help prevent ruining your night vision like a bright white backlight would and is more comfortable to read in the darkness.

Users report that the readings from the EMF reader are spot on if a bit slower to come in compared to an industrial use electromagnetic frequency device. It is an accurate EMF meter for ghost investigation.

The included flashlight is very bright, allowing the user to keep their other hand free while navigating iffy terrain during their ghost hunts. The temperature meter is also quite accurate.

The  Mel 8704r succeeds in serving multiple roles for the casual ghost hunter. Professionals may prefer more sensitive instruments, but ghost hunters that are just starting out or who are just looking to have fun will find the Mel Meter 8704r to be an awesome addition to their repertoire.

As we mentioned before, while the Mel Meter will provide multiple kinds of readings in one device, it suffers from not having quite as accurate of readings as the more sensitive devices that a lot of ghost hunters prefer.

Although the Me Meter can replace other bulky tools, if you’re someone who wants the most exact readings possible, maybe skip this meter. 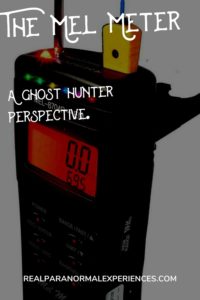 When it comes to reading energy levels and recording air temperature readings, the Mel Meter 8704r is a  useful tool, and while we have stressed that it isn’t quite as accurate as other tools favored by ghost hunters, there is one particular area that this meter shines.

That area is group ghost hunts for the public. Many paranormal research companies earn some considerable cash bringing interested amateur investigators out to notoriously haunted places for tours or overnights, allowing them to do some investigating of their own.

A lot of professionals would understandably be cautious about letting the general public handle their sensitive tools, especially switching from tool to tool all night long during a group investigation. That’s where the Mel Meter 8704r comes in.

With the base model only running around $100, paranormal research companies can purchase a handful of these devices to use on these paid tours, allowing their customers to use real paranormal investigation tools while also keeping their own stash of tools safe.

Another great use for this meter is when you’re traversing difficult terrain in the dark and don’t want to have your hands tied up with multiple EMF readers, flashlights, and temperature gauges. Instead, the all-in-one Mel Meter can do those jobs while still lighting your way and leaving your other hand empty.

What Does Mel Meter Detect?

The Mel Meter 8704r had an array of features, and while it is the base model of the Mel-8704 meter series, it’s still an impressive list of abilities.

Is It Worth It?

Ther baseline Mel Meter 8704r is a genius invention made just for paranormal research by a grieving father to help him communicate more clearly with his late daughter. It is billed as an all-in-one paranormal research tool, with more expensive models offering even more features than the 8704r.

The Mel Meter does its job well, is a great way to lessen the amount of gear you carry on a ghost hunt, and works especially well when in the hands of amateur hunters that may be overwhelmed by a large number of tools.

While it isn’t as pinpoint accurate as some other tools and may take some practice to get used to, the Mel Meter 8704r is a great device to get you on your way to ghost hunting.