Like the Midnight Game, one-man hide and seek (also called one-man tag) may appear to be a bit of innocent fun, but its roots could be much darker.

The true purpose of one-man hide and seek is to summon a spirit and invite it into a vessel in order to “interact” with it through the game.

Note: Similar to the midnight game and the elevator game you’ll see variations of these games played out on social media (with various levels of falseness added for views) and some follow the origin more closely than others.

The Origin of One-man Hide and Seek

The first online appearance of the rules of the game was in 2006 on a Japanese message board. A poster going by the name Hitori Kakurenbo shared the instructions and his experience playing.

One year later, after the Japanese instructions had been shared far and wide, someone eventually translated the original post. When the English-language version went up, the game spread like wildfire.

Posts and videos from all around the world documenting the results of the game went up, and there was no stopping its spread from that point on.

As the name of the game suggests, there should only be one player involved. You can have observers or associates to document the ritual, but they should not interact with you, the vessel or any spirit present unless absolutely vital. 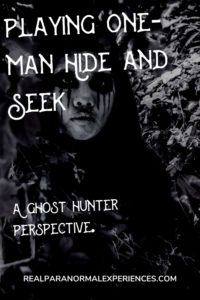 Though you should ideally be alone, if you are sensitive to spiritual phenomena or have any level of psychic ability, you may feel unwell during the game. This may include nausea, migraine, or poorer coordination than usual.

If that’s you, it’s probably a good idea to have someone nearby in order to assist you should you be unable to end the game on your own.

You need to finish “playing” within two hours. Otherwise, the spirit may become too bonded to the doll for you to be able to remove it yourself.

Ending the game doesn’t just signal the end of the play, it completes the ritual and sends the spirit back to where it came from. Do not leave your home, or let any other people in your home leave, until you’ve completed the ritual.

If you insist on playing alone, keep your phone to hand and have a designated friend keep theirs close to them until you send word that you’ve ended the game.

NB: Your phone’s reception may become unreliable once you start playing, and you may be unable to get a call out.

In this scenario, a text message can be a more reliable method of reaching your friend, as it only needs a brief moment of adequate signal to go out.

Preparation for the Game

How to Play the Game

How to End the Game

Adaptions of One-Man Hide and Seek

The clue should be somewhere in the name but if you forget the “one man” part of the game you’re certainly no longer playing the game correctly but that hasn’t stopped adaptions like this from spreading on social media. Make of that what you will.

Should You Play One-man Hide and Seek?

It’s like I always say: telling someone not to do something is a surefire way of ensuring they’ll immediately do it. And when you invite a spirit into a vessel, you may not know who will show up. so be prepared for anything.

Do your research, follow the instructions to the letter (particularly involving purification) and you shouldn’t experience any ill effects.