It’s time to cover the tragic Carmen Winstead story and the paranormal chain letter incidents that followed the 17-year-old’s death.

Carmen Winstead was a run-of-the-mill Indiana teenager who was tragically killed when she was pushed into a sewer by five other students. The incident happened when her school was in the process of completing a fire drill.

Carmen had been having a few problems with a group of female students – she stood out as a little different therefore she was picked on occasionally…and that is exactly what happened when she was pushed down the sewer entrance.

It was supposed to be a joke – a way of embarrassing Carmen in front of the school…but she did not reemerge from the sewer.

The police were brought to the scene and they soon located and recovered her body in the sewer. Her neck had been completely broken, probably happening when her head hit the metal ladder on the way down.

The students at the school were questioned but none of them witnessed what the group of girls had done – these girls did not own up to their actions. Instead, they told the authorities that it was a clumsy accident – Carmen had simply fallen through the open sewer cover. 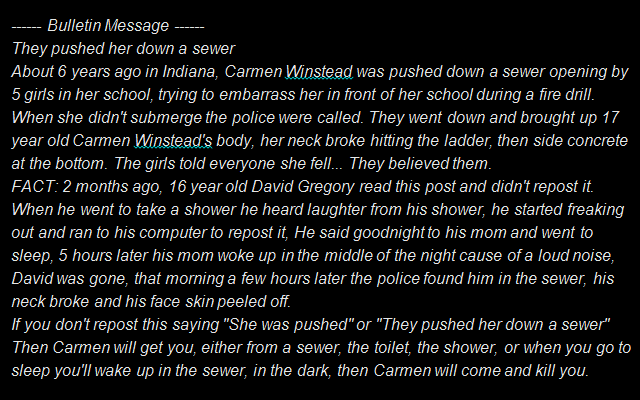 A couple of months after the tragedy, numerous students at Carmen’s school started receiving emails and messages on their myspace accounts titled ‘They Pushed Her’.

These messages contained the truth about what really happened on the day of the fire drill.

The messages did not contain specifics on who pushed Carmen into the sewer…but they did warn that the guilty party needed to come forward… otherwise, there would be horrible consequences!

Most of the students thought that this message was nothing more than a sick joke…but five girls got REALLY worried.

They had a right to be worried – within several days of the message going viral, each of the girls was found killed and disfigured in the same sewer Carmen had died.

Many now believe that Carmen is a very real entity, that is hell-bent on informing the world about her murder. Not content with the deaths of the guilty party, she will visit anyone who does not believe the story and forward it on to others.

Is the Carmen Winstead Story True?

Well yes, these events apparently happened in 2006…but the ‘entity’ of Carmen Winstead is regarded as a bit of an urban legend.

Some skeptics claim that Carmen never really existed – that this story started as a hoax and went from there. Many believe this…but if they receive an email entitled ‘They Pushed Her’…they always forward it…just in case!

Others believe that these events DEFINITELY took place, but they were in another part of the world. As a side note – this subject is often researched through search engines from various parts of the Philippines.

What are your thoughts on the Carmen Winstead story?

Do you believe in the Carmen Winstead chain letter?

If you do not forward the letter with the words ‘They Pushed Her’ in the title…will the spirit of Carmen come after you?