I’ve covered dowsing rods for ghost hunting in more detail and while they are a more spiritual tool than a scientific one (which I prefer to use for paranormal investigations) there certainly are teams out there using grave dowsing and I’ve been asked about the dangers of using them.

The dangers of using dowsing rods depend on how you are using them. In general, no, they are not dangerous by themselves. But if used in the wrong way, or by not using them in a serious matter, they can cause trouble.

Important note: I have talked about if ghosts can hurt you and the dangers of ghost hunting. There may be an argument that any kind of communication with a ghost might attract unwanted attention from a ghost you’d rather not deal with. Whether or not the risks are worth it in ghost hunting is always going to be a very personal decision.

The dowsing rod has a pretty interesting history, especially in occultism. A forked piece of rowan, or willow wood, or a Y-shaped metal rod is used to detect things such as water, minerals, or archaeological finds. However, they have also, and still are, used to connect with spirits, a practice that has been around since the Middle Ages.

Plain and straightforward, dowsing is asking questions and interpreting the answers by using a rod or pendulum. Whether people use them to detect coins or ghosts is another question.

Is Dowsing Really Used to Look for Ghosts?

The use of dowsing rods has been around for centuries, and in more recent history, the rods were used by police and farmers to locate underground tunnels and mines. The rods were, and are, useful because they use energy to discover things.

Everything that exists in our universe has an energy field; every particle, object, emotion, and experience. Dowsing allows you to tune into the frequency of that energy and reflect it back to yourself.

Paranormal investigators tell us that dowsing rods pick up on the electromagnetic fields given off by the object or energy being searched for. This is why dowsing rods work well with EMF readers.

Both instruments can pick up on the changes in the electromagnetic field by reading into the frequency of the ghost or spirit. 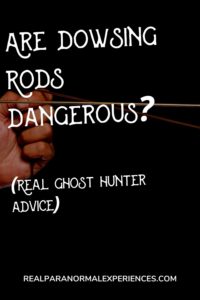 The dangers of using dowsing rods depend on your point of view. Are we talking about physical danger or something more profound? Let’s take a look.

If you have a solid dowsing rod made of metal, there is always a risk you can injure yourself if you aren’t knowledgeable in how to carry or use them. Especially if that metal is rusty and you aren’t up to date on your tetanus shot!

There is also a chance that you could poke someone in the eye if you were overly adventurous, but the likelihood is low.

In general, the physical risk of using dowsing rods is not much of a danger at all.

For those who are religious, the use of dowsing rods can have diabolical repercussions and can even threaten the soul of the person using it. It is thought that using them is allowing the devil to work through you.

However, it is hard to know if this thinking comes from actual experience or based purely on their own interpretation. But either way, it is a genuine danger to some people.

Using a dowsing rod is similar to using an Ouija Board. It’s the attempt to get information through energy, whether negative or positive.

It is believed that using dowsing rods opens the door for the devil to do his handiwork.

However, some religious people have used dowsing rods with no problems and deny any diabolical connection or concerns for their souls.

Not Having Enough Experience

People who are beginners in just about anything are going to make mistakes. But if anyone is susceptible to the presence of spirits, they can get a reaction from their energy rather quickly.

And this can be dangerous for those not used to such a powerful force. These people may not even know they are sensitive and may react to the sensations they feel.

Religious or not, this can open the door to undesirable forces. These forces will take advantage of a user who suddenly feels ill or uncomfortable.

Not Taking it Seriously

As paranormal investigators have stressed, to be good at dowsing, you’ll need practice. And you will also need to take it seriously.

Always speak some sort of prayer to God or to the universe to protect you. The powers that be are a lot stronger than any force you may come in contact with, but it’s essential to ask for protection.

Ask permission of the spirit if you can communicate. Take it seriously and ask actual questions. Don’t laugh and think it’s something to amuse yourself or others. Only yes or no questions work, so don’t expect a conversation.

Remember that dowsing is work, and it’s not going to be 100% accurate.  And you will need practice, just as ghost hunting takes practice. Respect the ancient art of dowsing and take it seriously.

Through the centuries, people have used the ancient practice of dowsing rods. It’s been used not only as a way of dowsing for water but also in the New Age as a paranormal tool. It’s used as a form of fortune-telling and archaeology combined.

Using dowsing rods can be a fun and a great way to communicate with the other side. But doing so safely is the best way to avoid any dangers it may have.