When we think of haunted houses, the sprawling coastal mansions depicted in horror films and television are usually what come to mind. Maybe even a gothic stone manor house that looks more like an ancient castle than a place where any living person would reside.

Willow’s Weep may not fit the stereotype or look as imposing, but former residents and paranormal investigators alike have called it one of the most haunted houses in the midwest, perhaps even the entire United States.

In the small town of Cayuga, Indiana is an unassuming house on a quiet street. By all appearances, the lovely home named for the giant willow tree in the front yard appears completely normal, even inviting. But closer scrutiny reveals some alarming details.

The house is located at the center of a crossroad, close to a river. In both folklore and supernatural circles, both crossroads and rivers are seen as spiritual meeting places, often for demons and dark spirits. And that’s not the only uncanny thing about the property.

From the front, the cute clapboard building seems like a great place to live. But from above, it’s evident that Willow’s Weep is cross-shaped and faces east. If it wasn’t clear by that alone, the entrance is located at the base, making the house into an inverted cross.

Inside, the geometry of the home is even more sinister: though it may not be evident at first glance, the corners of joining rooms meet in the main living area to form a pentagram. 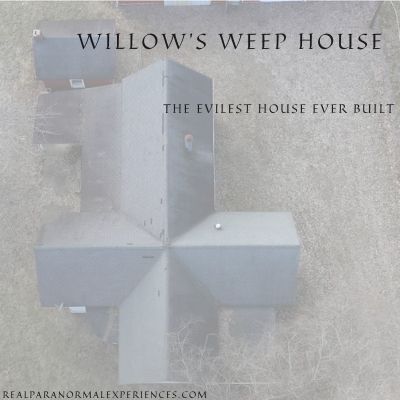 Built in the 1890s, historians and paranormal investigators have assembled a trove of information about the history of the home, including every suspicious death and recorded haunting that has occurred in and around it.

Deaths that defy normal explanations have been recorded throughout the history of the property: poisoning, hangings, suicides. In fact, the first recorded death was of the man who built the house, who was found in his bathtub. No cause of death could be determined.

In the mid-1950s while replacing a floorboard, residents found a crumbling book in the space between the floor and the packed dirt under the house. Upon further inspection, they saw the strange book was a grimoire, filled with horrific images of brutality and dark incantations.

This was no normal Wicca book, and obviously contained the owner’s deepest secrets. Worse: according to the inscription, it belonged to a previous resident.

Petrified about the witch’s possible return, after burning the book, the occupants moved out. The story stayed in the family for generations, until the grandson of the woman who found it called David Spinks and told him the tale. 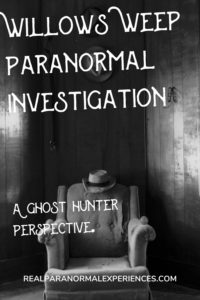 Paranormal investigator David Spinks is the current owner and has personally done a lot of the into the home. No stranger to an evil house, he’s proposed that not only does it contain darkness, but could be the evilest house ever built.

Because of this, Sparks believes it was possibly created to contain evil and the ghastly deaths weren’t natural and point to a dark influence.

Not So Historical Hauntings

Before Spinks came to own the house, it was the property of Brenda Johnson, who planned on renovating and selling the property onward. She didn’t believe in the supernatural, so buying a haunted house wasn’t a big deal. In the early days, she says there were no issues.

Over time, strange things began to occur. At first, Johnson assumed it was old house stuff in keeping with the quirks of any old property. Doors swinging on their hinges or slamming, and occasional banging from underneath the floor that she attributed to rotten pipes.

But then the banging started coming from the walls, ceilings, everywhere. And that was then that people started getting hurt.

Johnson’s son was working on the ceiling, and securely affixed boards came flying off, striking and injuring him. Shortly after, Brenda reported being scratched by something unseen, and finding six claw marks, as though a person with an extra finger raked their nails over her back.

Around the same time, as she’d bought the house, Johnson hired a maintenance man. Debra heard a cry from outside, where he had been mowing the lawn. She rushed outside to investigate and found the man crumpled against the wall of the house, unconscious.

After being rushed to the emergency room, it was discovered that his spine had been nearly fractured in several places. He couldn’t remember what happened, but Debra suspects that he didn’t heed her warning and got too close to the willow tree.

The tree is rumored to contain the spirits of vengeful dead or demons, and after her son’s “accident” and her own attack, she began to pay attention to the stories she’d previously ignored.

Upon discharge from the hospital and some recuperation, the handyman said he felt well enough to finish the work he was contracted to perform, including checking under the house to verify if any of the strange banging actually being caused by the pipes.

In order to access the plumbing, he had to go through the entrance of the exterior access hatch, and crawl on his belly. But once under the house, he discovered that this was easier said than done.

Where there should have been packed dirt were mounds of varying sizes. Assuming it was the work of groundhogs or rodents, he began to push them aside and clear a path. It was while clearing this path that he found the bone.

He wanted to assume that it was from a long-buried pet, or maybe livestock that had gotten under the house and died. He couldn’t maintain that belief for long: out of the darkness came hands he couldn’t see or touch, pulling at him and trying to drag him down.

After struggling for what felt like an eternity, he was able to free himself. Johnson, hearing the commotion while working above, ran out just in time to see the handyman crawling from the hatch, panting and panicked.

He threw the bone at her and declared he would never go under than house again, and if that was a problem she could find another contractor.

Debra, sensing the bone might be related to the “accidents” brought it to a local physician. The doctor quickly identified it as the intact humerus of an older child, long dead. Law enforcement was called, but because the bone was over 50 years old, the police declined to investigate.

Unsatisfied with ignoring the house’s deepest secrets, Johnson did some research and called David Spinks. Spink’s first introduction to Willow’s Weep was through his work as a paranormal investigator.

After determining there was nothing she could do to change the house, and not wanting her or her family to become part of Willow’s Weeps legacy of a suspicious death, she sold the house to Spinks and never looked back.

The True Purpose of Willow’s Weep

After assembling stories, and allowing numerous paranormal investigators entry to study and observe, a number of theories have been developed to explain why this strange house, with its strange shape, in its strange location, came to be.

The most plausible theory, the one that accounts for the idiosyncratic shape, the hauntings, the attacks, is that the house was constructed not to attract demons and ghosts out, but to trap them.

But whether this was an act of goodwill or the project of someone sinister with a dark secret, we may never know.