The true story behind the 2013 film The Conjuring is that of the well-known Perron family. The Perron family’s haunting started in the winter of 1970 after Roger and Carolyn Perron moved into the home of their dreams.

The home was located on Round Top Road, Harrisville, Rhode Island. Built in 1736, it was a charming country home with ten rooms. It was the perfect choice for Roger and Carolyn to move into with their five young children.

The children, all girls, shared bedrooms in pairs, apart from the eldest Andrea Perron who had a bedroom all to herself.

The Perron family began to notice something very strange on the very first day in their new home. The previous owner had advised the family to leave the lights on at night, the confused Perrons had no idea why.

Little did they know that they were about to encounter a haunting by the eight generations of tragic families that had previously resided in the Old Arnold Estate.

The generations of family tragedies included that of the late Mrs. John Arnold, who hung herself from the rafters of the barn at the old age of 93.

There were several other suicides such as hangings and poisonings and four men mysteriously froze to death on the farmland. In other mysterious circumstances, there were two suspicious drownings on the land also.

A farmhand even raped and murdered an eleven-year-old girl, Prudence Arnold. The amount of tragedy that this farmhouse had encountered was unbelievable.

The demons that the Perron family encountered after the move into their dream home were frightfully scary. The demons were reported to have pulled the girls’ hair and limbs during the night. House rattling bangs on the front door and banging interior doors were a regular occurrence.

The Perron family heard cries throughout the night including one voice that told of seven dead soldiers buried within the walls.

Some of the spirits that they encountered were so evil that the Perron family were unable to share what the demons had done to them.

It was hinted in Andrea Perron’s book about their experiences (House of Darkness, House of Light) that one of the evilest spirits had often molested the five young girls during the night. She avoided thorough questioning about this spirit in the home by merely saying it was a bad male ghost.

Some of the ghosts were thought to be harmless, smelling of flowers, kissing the girls goodnight or playing with toy cars.

One amazing spirit, presumed a female, was welcomed in the home of the Perrons. The apparition would sweep the entire home, leaving neat piles of dirt ready to be put into the trash by the family.

Another ghost that the five girls loved was believed to be the spirit of Johnny Arnold, who had hung himself in the attic of the house during the 1700s. The girls called him “Manny”, he would watch over them with a comforting smile, in a reassuring manner.

During their time in the house, the Perrons also experienced other paranormal activities, such as levitating beds and other household objects flying around the rooms.

Chairs were reported to be pulled suddenly away from unsuspecting guests as they were about to sit down, whilst paintings and picture frames would crash down from the walls.

It was stated that the most awful demon in the home had targeted Mrs. Perron herself. The apparition was said to be the ghost of Bathsheba Sherman, who was known to be a practicing Satanist.

Deemed to be a witch Bathsheba had hung herself during the early 19th century behind the barn. It was alleged that Bathsheba was able to terrorize Mrs Perron because she was not religious and weak of faith.

This theory was confirmed when it was found that a local minister had been able to reside in the Old Arnold Estate with no sightings or unusual occurrences at all.

Bathsheba was a terrifying apparition, described as being covered in cobwebs and vermin with a visibly broken neck. Her presence was always followed by an evil stench.

Carolyn Perron was terrorized by the ghost of Bathsheba, she was slapped, pinched and taunted with lit torches. It was even believed that Carolyn became possessed with the spirit of Bathsheba.

Attacks on Carolyn Perron became increasingly harsher until the Perrons decided to enlist the help of paranormal investigators Ed and Lorraine Warren.

Mr. And Mrs. Warren had helped to investigate haunting and possessions around the country. They had even been able to convince the Vatican to provide exorcisms in extreme cases.

The Perrons had heard of the Warrens at one of their many public appearances. After assessing Carolyn Perron, Ed and Lorraine believed it to be true that Bathsheba had physically possessed her.

They decided to exorcise the demon.

Andrea Perron documented the night that the exorcism took place that it was their most terrifying night of all, watching her mother be thrown twenty feet into another room by the evil apparition. 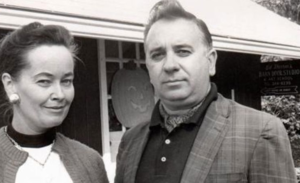 Although the Warrens were able to help on that frightful night, it was alleged that things became increasingly worse after the exorcism.

The Perron Flee to Safety

During their plight, the Perrons had learned about the past occupants’ reports of supernatural phenomena on the Old Arnold Estate.

They realized that it was time to leave but financial constraints held them at their haunted home for ten long years.

Finally, in 1980 they had enough money to flee to Georgia. It is said that the current owners of the home, Norma and Gerry Sutcliffe, have also experienced haunting paranormal activity in the farmhouse, but none quite as terrifying as that of the Perron family haunting.