Perhaps this sounds familiar: it’s a dark night, and little is visible save shadows cast by the light of streetlamps shining through curtains. Suddenly, it becomes clear that there is a figure in the room. A human shape, a shadowy intruder, is in the room.

But is that shadowy figure your imagination, or something more? There are scientific theories that claim shadow people all in our minds, but nothing universally accounts for their presence. The truth about shadow people is a mystery, but here’s what we do know.

What Are Shadow People?

Shadow people are described as humanoid figures, typically a black shape with imperceptible features that appear largely in shadows. Cultures spanning time and the globe have records of the shadow people phenomenon.

They may have different names across the world, but the experience is the same: A person is going about their business, usually sleeping, reading, or watching TV. And then, out of the corner of their eye, they see a figure that appears to be hiding in shadow.

But when they wake up or turn to look directly at it, the figure is gone.

Paranormal investigators will point to what they believe to be obvious: shadow people are ghosts, and those who see them have actually witnessed ghost apparitions or related ghost phenomena.

This interpretation is challenged by previously recorded ghost sitings. Unlike documented ghosts, which are somewhat visible and typically have some distinguishable features, shadow people are only assumed to be human-shaped because of their outline and height. 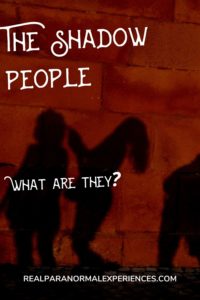 Another point in the “not a ghost” category: documented feelings of malevolence. When visiting, shadow people are said to have threatening energy that leaves witnesses terrified and alarmed at the prospect of future visits.

Different religions have different names for these presences. For Christians they’re demons, Muslims may refer to them as inciting nafs, and Buddhists may see them as emanations caused by our unenlightened selves.

Other people who claim they’ve been assaulted by shadow people see glowing red eyes when the figure approaches, and are left with scratches and bruises from the attack. In these instances, people say they have effectively repelled these figures by calling on god.

This is why some point to demons, or lower spiritual interference as the origins of shadow people. But there’s also the chance that people are conflating two different kinds of apparitions, as the majority of people who encounter shadow people are never physically harmed.

Another possible explanation for shadow people is that they are actually visitors, either from our world or another, or even guests from a completely different time or dimension. Whether interdimensional or time travelers, they’ve come a long way to loom in the shadows.

Evidence in support of this theory can be found in the statements of people visited by aliens. Though not always, similar feelings of dread overtake them, and their visitor’s (or captors) features are indistinguishable.

Alternate theories also exist proposing that shadow people are time travelers or visitors from alternate dimensions. The possibility of inter-dimensional beings may seem far-fetched, but the methods that would allow us to peek into different planes of existence have been theorized.

As attractive as this theory is, science needs to catch up before we can prove or disprove the notion of extra-dimensional or alternate timeline shadow people.

What Does It Mean When You See Shadow People?

The one thing most agree about is that if you’re seeing a shadow person, it’s a great energy expense to them and powerful use of perception by you.

People who are “sensitive” or perceptive to the supernatural are typically those visited by shadow people. So if you’ve never seen one before, you should probably ask yourself a few questions to get to the bottom of things.

Has anything happened to you or a loved one that would account for an increased level of extra-sensory perception? This could be the death of a loved one, or the loss of an important relationship, and even a near-death experience by accident or illness.

What Do Shadow People Want?

Unfortunately, no one really knows, but it could depend largely on the reason why we experience the shadow people phenomenon.

If they’re ghosts, these fleeting shadows could be trying to communicate something about their life, death, or even events that might befall us. A ghost apparition in the form of a shadow person may have nothing to do with you and be focused on your location instead.

In the event of a spiritual threat, their goal could be to create pain and strife that would lead to a loss of faith.

If they are beings from another time, galaxy, or dimension, the voyage could be a fact-finding mission or even an attempt to warn us of an impending personal crisis or cataclysmic event.

Another possibility is that these emanations aren’t even in control of their appearance. Maybe they’re a person having an out-of-body experience.

Thankfully, shadow entity contact experiences show that these entities don’t have the ability to make physical contact. And logically, we know this makes sense. An indistinct shape or hooded shadow is unable to physically harm us.

But just because a shadow person can’t actually harm your body, doesn’t mean there isn’t a chance of psychological or spiritual harm. Experts recommend that if you see a shadow person, stay calm. If you feel the malevolent force, prayer (silent or out-loud) can be peace and relief.

Chances are they’re just like spiders: as scared of us as we are of them. Our energy and response could be what actually influence theirs, so keep that in mind if you see one.

Note: There are accounts of ghosts hurting us so please don’t take this as a blanket statement for all paranormal activity.

Whoever’s explanation about shadow people you think holds the most water, they are indeed fascinating and sometimes alarming. If you want to learn more about them, there are lots of places to get your fix. Their authentic existence can’t be called into question when so many have seen them.

Paranormal author Author Heidi Hollis has written a couple of books on the subject that warrant your attention.

For younger readers, there’s The Hat Man: A Guide in Comics on How to Get Rid of Dark Beings for All Ages, and for grownups, check out The Hat Man: The True Story Of Evil Encounters.

The 2015 documentary The Nightmare was a box office flop, but the subject matter is riveting. Filmmakers interviewed people with sleep paralysis haunted visions of shadow people, re-creating their experience in vivid detail, allowing you to witness the terror for yourself.

If that’s too real for you, the 2013 horror film Shadow People, starring Kat Steffens did a lot better at the box office. The film depicts a fictional sleep study where participants are visited by the shadow people.