The truth about The Real Life Conjuring House, based on the true story of Rhode Island family, The Perrons, is that what went on in the 18th-century farmhouse is even more terrifying than the movie.

Where is the Conjuring House?

Located in Harrisville, Rhode Island sits the epitome of a Colonial New England farmhouse. Built in 1736, the Arnold Estate, as it’s known, is truly a legend. It is thought to be one of the most haunted houses in the country, and the experiences of those it haunted were made into the blockbuster horror movie, The Conjuring.

The house is roughly 30 minutes from Providence, the state’s capital. Beautiful, winding country roads will eventually bring you to the old home, fitted in rustic clapboard.

The luscious farm landscape is a sight for sore eyes. The old farmhouse sits close to a river and offers the sought-after New England beauty that so many seek out. And it is full of profound paranormal history.

What Really Happened There? 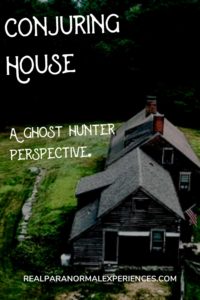 The makers of modern horror movies love to play on the fears of the unknown by toying with stories of the occult, demonic possession, and paranormal activity. Several films, such as Amityville Horror, and The Exorcism of Emily Rose, claim to be a true story, as does the Conjuring movie. The home is said to be a hot spot for paranormal activity.

The Perron Family, who lived in the home during the 1970s, claim that the events that took place in the house were very real and absolutely terrifying. A spirit by the name of Bathsheba Thayer is said to have haunted the home, as well as the family.

But what really happened to the family, and what are some of the things that the movie may not have covered?

The Spirits Weren’t a Menace in the Beginning

When toys of the five Perron sisters began disappearing and moving to other locations within the home, the sisters naturally accused each other of the mischief. But as time moved on, it was believed that ghosts were playing harmless tricks on the girls.

The spirits seemed to be almost like playmates and friends, whose presence would fill the room with the scent of fruit and flowers.

The Conjuring house has a pretty dark history, including violence, rape, suicide, murder, and drownings.

The Perron children explain that the friendly ghosts that originally started playing tricks on them didn’t stay friendly for long. Putrid smells began to fill the home as the good spirits seemed to be replaced with malevolent ones.

The children started hearing strange voices telling them about bodies that were buried in the walls. The family was soon awakened every night by the smell of rotten flesh along with some frightening paranormal experiences.

Mrs. Perron Seemed to be the Main Target

It seemed as if Mrs. Perron would experience the worst parts of the haunting. She claimed she was visited at night by a strange lady whose head hanged to the side, warning her to leave the home.
Ed and Lorraine Warren, the demonologists who came to help the family, believed her to be the troubled spirit of Bathsheba Thayer. Bathsheba lived in the farmhouse during the 18th century and was accused of killing one of her own children with a knitting needle.

Other family members believed that the spirit of Bathsheba saw Mrs. Perron as a threat. Carolyn Perron claimed that the spirit tormented her and tried to physically harm her with a knitting needle.
And at the same time, Bathsheba took a particular liking to Roger Perron, Carolyn’s husband.

The Perrons Couldn’t Afford to Move

The economy in the 1970s was suffering and the family had every dime invested into a property that was losing value by the day in the tanking housing market.

Past Owners Have Experienced Similiar Things

The house had a horrible past, and past owners of the home have also experienced hauntings, and it caused some people to leave in a hurry and never return.

Can You Visit the Real Conjuring House?

While the previous homeowners did their best to deflect tourists from bothering them, the new owners feel differently. Cory and Jennifer Heinzen, who purchased the home in 2019, have welcomed the home’s paranormal past and are now open for business.

While the homeowners aren’t currently offering daytime tours, you can book an overnight investigation ranging from $125 a night to $750. Though the overnight stays may be expensive, they are also said to be a given for paranormal events.

But the Heinzen’s points out that their home is not a bed and breakfast. They can provide cots, but the beds are off-limits to any paranormal investigator.

If you wish to visit, you’ll need to book ahead, as the reservations are booked up through the end of October, and yes, Halloween night has been spoken for.

What is Inside the Conjuring House?

The Heinzen’s keep the home furnished in a rustic gothic farm style, and you may catch the eye of an old Raggedy Ann doll or an Ouija board just hanging around. The floors in the home’s living room will creak at random, and the house’s library has been subject to books flying off the shelves.

In the bedrooms, shadowy figures have been witnessed in the upstairs bedrooms where the attacks on Mrs. Perron are said to have happened.

Visitors say the home’s basement is tough to navigate in the dark, and every little noise causes one to jump. And the myriad of snake skins that dangle from the home’s foundation is really strange.

Ghost Adventures at the Conjuring House

When Zac Bagans, the lead investigator with The Ghost Adventures Crew, stayed the night in Conjuring House, he was left a bit shaken.

Zak claims that he felt very sick after leaving and didn’t feel wholly better for several weeks after the fact. He says he was overcome with weakness, and his balance was off, and he just felt as if his body was somehow out of whack.

The Ghost Adventures Crew were the first people allowed in the home in 15 years, and they realized how lucky they were to be able to investigate.

But their investigation, which spread out over several days, was not only thrilling but a little scary. After seeing a black mass in the home, Zac said he fears for the family that currently lives there.