The Peach State is known for its southern hospitality and beautiful scenery. But’s also one of the most haunted states in the country. So let’s take a look at the most haunted places in Georgia.

Georgia, besides its grace and charm, was also the headquarters of the Confederate Army. Several bloody Civil War battles have taken place here, along with many other turbulent events that have shaped our nation’s history. As a result, it is a place with a sizeable haunted history.

It’s not surprising that a state so steeped in rich history also has its share of hauntings and lost souls that cannot let go of the past.  Paranormal occurrences continue to haunt the Peach State to this day.

One of the most historic cemeteries in the country is Oakland Cemetery in Atlanta. Originally called City Burial Place, it is the resting place of almost 70,000 individuals.

Generals, governors, clergy, and other famous Georgia inhabitants have been buried beneath the vast beauty of the 40-acre burial ground. The graves of novelist Margaret Mitchell and former mayor, Maynard Jackson, can be found here.

But aside from its peaceful facade, Oakland Cemetery also has many unknown souls who are buried there. According to paranormal investigators, this has been the cause of several spirits, some friendly and some not so friendly.

In Oakland Cemetery, there is a side that is the burial ground of Confederate soldiers. One of the most commonly heard occurrences is the roll call of the dead, a military-like roll call. People have also claimed to have heard responses being called out in answer to the roll call.

Oakland Cemetery also has its share of upsetting sights, including the shadowy figure of a Union soldier being hung from a tree. People have also claimed to see Jasper Newton Smith rise out of his statue in the dead of night to stand guard over the cemetery.

Other guests to the cemetery claim to have heard odd sounds and disembodied voices being carried through the air. 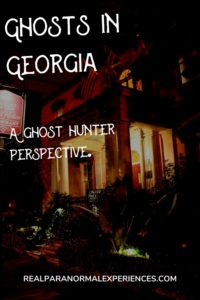 Built in 1771, this Georgian Style mansion, called the Olde Pink House, is located in the historic district of Savanah on Reynold’s Square. A beautiful restaurant known for its southern cuisine was originally the home of Joseph Habersham Jr, who lived in the house until he died in 1802. It is one of the most historic homes in the state.

But it may not be just the food that draws the attention of ghost hunters from around the nation. The resident ghost, Mr. Habersham himself, has been seen frequently throughout the property. He is said to make his appearances between October and March.

Patrons have spoken of the ghostly apparition of a man dressed in 18th-century clothing, having a drink at the bar. He then disappears into thin air, like something out of a ghost story.

Nevertheless, Mr. Habersham seems to appear on a regular basis. Sightings like this seem to be the epitome of haunted houses.

What is most disturbing for folks is the appearance of the ghosts of slave children, including hearing their ghostly voices and laughter. They are said to be quite mischievous and to have locked guests in the restaurant’s downstairs bathroom.

So much so that waitresses have tried to discourage diners from using that bathroom. Patrons have also witnessed several cold spots in and around the downstairs bathroom and the appearance of strange lights.

Located on East President Street in Savannah, the 1790 Inn & Tavern is the oldest hotel in the city. It’s not only a popular tourist stop for its history but its paranormal activity as well, as it’s one of the most haunted spots in the state.

Paranormal experts say the ghost of Anne Powell haunts the premises to this day. Anne was a young girl who lept to her death from room 204 because at 17 years old, she was unmarried and pregnant.

It is said that Anne’s ghost haunts those who stay in room 204. Guests have seen her looking over them before bursting into tears and jumping to her death…over and over again.

Patrons also claim that they have heard unexplained footsteps in the room at night. Other guests have reported that strange sensations are touching their cheek in their sleep, and upon waking, find no one there except an eerie cold spot—other’s report seeing a shadow figure in their room.

The inn is still one of the most haunted hotels in the state.  As a result, this historic hotel has gained the attention of ghost enthusiasts around the world.

Located in the historic district of Marietta, the Kennesaw House was built in the 1840s and used as a makeshift hospital during the Civil War. It is believed to be home to almost 700 lost souls.

Guests say they have seen the spirits of young soldiers in hospital beds, as well as a surgeon walking through the halls.

Another guest reports having seen a beautiful woman in a blue, Antebellum style dress. The woman is said to smile at the guests. The woman in the blue dress is thought to be the original owner of the Kennesaw House.

In downtown Madison sits this classic Greek Revival that was built in 1811. It was a private residence until 1977 and is now one of the city’s most visited attractions. It may have been used as a boarding house as well.

Many come to explore the museum’s beauty and admire the furnishings and artifacts. But it is mostly ghost hunters who come to see if the paranormal stories are true, hoping to see a blurry apparition.

In 1851, Virginia Nisbet died in the home’s master bedroom while giving birth. Many claim they have seen Virginia’s spirit in the room, and others claim to have felt her presence, claiming she is one of the ghostly residents who never leaves.

The bedroom where she died seems to be where her spirit thrives the most and has been named “The Ghost Room.”

Several other places continue to haunt the main streets and back roads of the Peach State and offer excellent ghost tours. If you are hoping to hear some disembodied voices or see some shadowy figures, all of these places can easily be found on Google Maps.