If you’re traveling in the United States for work or pleasure, there’s no shortage of opportunities to visit or stay in a haunted hotel.

When in Boston, be sure to check out one of these hotels so you can get a chance to experience the best local paranormal phenomena the city has to offer.

From 1839 to its closure, Pilot House’s location near the Lewis Wharf in the Boston harbor made it the go-to for captains and pilots who could afford to spend a night on dry land. Though well-appointed in its day, this inn may not have impressed all guests with its…amenities.

In addition to reported strange noises, unexplained sounds, and troubling appearances, this 19th Century hotel even had its very own Lady in White. The spectral figure of a beautiful woman in white was seen wandering the kitchen at night, and may still be haunting the disused building to this day.

Though you can’t stay there, there are several ghost tours that offer to take past this former spooky sailor’s haunt.

Designed by architect and inventor J. P. Putnam and completed in 1901, this gem of the Back Bay was once a fashionable hotel and residence for the upper classes.

The building’s ghostly history can be traced back to its early days. Rumour has it that a little girl called Emma and her family were some of the first residents. Because the building was so new and all the kinks hadn’t been worked out, things didn’t always work as they should.

One day when Emma was playing in the hall near her front door, she managed to drop her ball into what appeared to be an elevator stuck open on her floor. But it wasn’t the car, just the empty shaft. The elevator doors had gotten stuck open when a previous resident was let off. 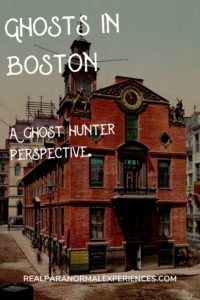 Not knowing this, Emma lost her balance and fell to her death. Since then, people have reported seeing a little girl disappearing around corners, and hearing giggling along the halls.

In 1947, it was purchased by the Boston University to use as female dormitories, and this is where the majority of reported sitings began.

Students reported hearing voices, feeling scared for what seemed like no reason, and remarked how it felt like they were being watched even when they were in rooms where it was impossible for anyone to hide or spy. A handful even reported ghostly apparitions throughout the residence.

The former hotel is now the site of condos and some well-appointed office buildings. If the ghosts are still there, hopefully, they’re sticking to the bosses and leaving the poor, overworked interns alone.

This national historic landmark is now a swanky hotel in Boston’s posh Beacon Hill. For all its style and glamour, you’d never guess it was once known as the Charles Street Jail, aka Suffolk County Jail.

Completed in 1951, the jail was designed by Boston’s most famous architect at the time, Gridley James Fox Bryant.

While still in operation, the jail housed the likes of crime boss Whitey Bulger, Italian-born anarchists Sacco and Vanzetti, and even Italian prisoners of war during WWII.

Similar to the fate of modern jails, the Charles Street Jail fell into disrepair, became overcrowded, which resulted in inhumane conditions. A civil suit filed in the 1970s brought these issues to national attention, but it didn’t stop operating as a prison until over 20 years later.

Nowadays, the high-paying guests and hotel staff alike can experience the strange sittings and sensations many have reported while in the hotel.

The most disturbing reports include seeing figures peeping through windows (on the upper floors, which no human could possibly access) and the sound of boots on metal gangways coupled with the clanging cell doors.

Safe to say that any spirit residents are most likely former living members of the jail population or staff.

The luxe Lenox Hotel, a member of the Historic Hotels of America program, led by the National Trust for History Preservation, has high-thread-count sheets and an even higher spectral headcount.

At 11 stories tall, when it was erected in 1900 by hotelier Lucias Boomer it was the tallest building in all of Boston.

For a truly spooky stay, request room 300, to chance an encounter with both a famous ghost (and a friendly ghost too)!

Room 300 is widely reported as being haunted by a cigar-chomping specter named Red. Hotel employees say he’s particularly fond of poker, so make sure to bring a deck of cards and some chips if you want to draw him out. 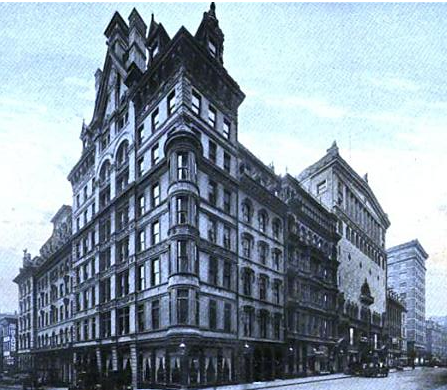 And finally, the most haunted hotel in Boston: Omni Parker House. A city fixture since 1855, the hotel is often listed as both one of the most historically important buildings in the city, as well as one of its most haunted.

Named for the man who founded the hotel, Harvey Parker, the hotelier is said to still be roaming the halls, and occasionally its rooms.

Witnesses include both guests and hotel staff, but the one thing they share is the deep belief that  Harvey Parker’s ghost resides on the 10th floor. If you’re wondering what’s inspired him to stick around, there aren’t any concrete answers.

We do know he’s never intentionally frightened anyone, even on the occasion where he appeared at the foot of a little girl’s bed in room 1012.

When she awoke the next morning, she promptly told her mother that a man in a fancy old suit smiled at her, and she smiled back. Moments later, he disappeared and she went back to sleep.

While en route to breakfast in the hotel’s dining room, the little girl stopped at let out a little cry, pointing to a man’s portrait on the wall and shouting, “that’s him!” It was a portrait of Parker himself, hung in memorium.

Though the 10th floor may seem to be where the vast majority of sightings take place, the 3rd floor also has its fair share of ghostly guests.

In addition to elevators being randomly called there with no technician able to fix the supposed glitch, room 303 is often plagued by the phantom smell of whiskey and cigars, in addition to strange shadows and the bathtub running by itself.

Stephen King’s short story “1408” is said to be inspired by the strange goings-on in room 303 (though the story is definitely darker than anything any guest has complained of.)

Those not staying in 303 can still experience paranormal phenomena on the 3rd floor. Several people have made a noise complaint after hearing whispering in front of their doors. When they went to investigate, there would be no one present.

Like the ghosts of the 10th floor, none of the 3rd-floor residents caused any serious fear or worry, and the voices always seemed congenial and polite in tone.

If you’re ever in Boston, be sure to reserve a night in one of the operating hotels listed. But remember, even in the fanciest suites a good night’s sleep may not be a part of the package.