Often the ghost hunter equipment we tend to use is adapted from civilian use but an SLS camera is probably one of the first pieces of equipment we’ve started to purpose build for ourselves.

A Kinect SLS camera uses an IR emitter, IR camera, depth camera and a microphone array to build a 3D map of an area. Between the IR emitter and the depth camera, it finds distortions and patterns which makes it ideal ghost hunting equipment.

One of the most popular ghost hunting tools it provides a unique tool at not only confirming the presence of a ghost but getting a closer look at their actions using technology old school ghost hunters would have killed for.

This guide will show you how they work and how to get started using one.

There’s not a lot of money in ghost hunting, so Real Paranormal Experiences is reader supported, and this page may contain affiliate links. We get a small commission for anything you purchase, and we appreciate the support.

How Do SLS Cameras Work?

The Kinect SLS is the most advanced gadget we have for capturing spirits that can’t be seen with the naked eye, but how does it work?

Originally this camera was designed to track human movements for a video game. By projecting IR light and measuring the response with a monochrome CMOS sensor the device tries to identify people and movements that we wouldn’t normally be able to see.

The camera detects human shapes and movements that your eyes will miss and paints them as stick figures to the display.

No, you’re not going to see an actual face but it can paint some very clear pictures of where a ghost is and what it’s doing. Sometimes being able to directly address a ghost will make it stop in its tracks and from there we can start to look for EVP and communicate with a tool like a spirit box.

How to Detect Paranormal Activity With an SLS Camera

The camera will work well in either high natural light or even absolute darkness making it my common choice for investigations at dusk.

You can leave it pointed at a set area (I suggest using a tripod) or sweep an area but you need to move relatively slowly and give the camera a chance to keep up with you.

As the 3D mapping paints an area the software will start to highlight potential spirits on the screen.

You could just set your camera up and sit in silence waiting to see what happens but with any ghost hunting devices you’re going to have better success if you actively try and get a ghost’s attention.

If you see a stick figure represented on the screen then (respectfully) call out to it and see how it reacts. Often the simple act of letting a spirit know we’re aware of it will lead to a better encounter than just watching. 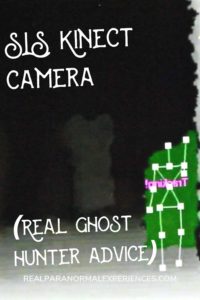 An experienced paranormal investigator quickly learns to filter out false positives and this piece of kit is no different.

Most of the human figures which briefly appear are going to be paranormal entities. You’ll get a lot of false positives but it’ll quickly become apparent when it’s found something.

Images might flicker in and out but when the depth sensor consistently paints an image there is when you need to take notice.

As the gaming technology was originally designed to spot human movement, it’s important to remember that the SLS camera will only work if it spots human shapes.

Not every spirit is necessarily going to hold that shape and with ghost hunting, you generally want at least one other piece of evidence documented before you take a session further. This brings us to the alternatives.

The Kinect SLS camera is mostly unique and there’s no other device capable of pinpointing human shapes like this.

One potential alternative is using a thermal camera for ghost hunting which is usually civilian equipment that just happens to meet a ghost hunter’s purpose.

Rather than trying to paint the 3D environment and look for human shapes, the thermal camera looks for differences in heat signatures.

Sometimes this type of camera will pick up things an SLS might miss but its main purpose, when used together, is to confirm if the stick figure you see here also has a temperature change surrounding it.

The Kinect is a pretty advanced piece of equipment and if you’re serious about ghost hunting it’s going to be worth the investment. There’s no app alternative that is going to match the quality, especially in lower light.

Warning: There are also a lot of apps out there which claim to have the same functionality but are just painting random figures on your screen. Similar to a simple Snapchat filter. These are not useful.

Out of the many apps we’ve tried the closest alternative to a real SLS camera is probably GhostTube. It won’t fully replace having the power of the Xbox Kinect camera and a bigger screen but it’s a handy addition to have in your pocket.

Getting an SLS Camera

As these devices are often custom-made, it can be tricky to find an SLS camera on sale. If you have a local paranormal investigation meeting I’d suggest there first.

If there’s nothing locally available you can order one online from a ghost hunting equipment dealer. Each one will vary as they are generally custom designs but I’d suggest getting one with the Xbox One Kinect for the better quality camera.

Alternatively, you can make your own.

How to Make a Kinect SLS Camera

There’s a video from Unearthly which will take you through setting up your own SLS camera.