Probably the #1 tool in a ghost hunter arsenal is a spirit box (sometimes called a ghost box). Beginners and advanced paranormal investigators alike will often reach for this box first. What is it, how does it work and (most importantly) how do you use one?

A spirit box scans radio frequencies quickly and constantly to give us an easy way to communicate with ghosts, detect EVPs and have a meaningful and intelligent conversation with the dead.

What Is a Spirit Box?

When you drill it right down, a spirit box is a broken radio. If a radio went haywire and started to quickly flip through frequencies you’d start to hear some bizarre messages come through – these boxes are made to specifically weed out these messages.

They give ghosts and spirits an easier path to communicate with us as the majority of them don’t seem to be able to speak loud enough for us to hear with the naked ear (which is why those stories are rare).

Spirit boxes can come in different shapes and sizes. I’ve reviewed the popular devices made specifically for ghost hunting, dozens of apps for phones and even covered a guide on how to build your own.

Example of a Spirit Box Session

How Does a Spirit Box Work?

You might have seen a Hollywood horror movie where a ghost starts controlling a car radio or television to communicate. They’re maybe closer to reality than they realize but it’s often not quite that easy.

There’s a long history of electronic voice phenomena (EVP) coming through the white noise on these devices. Because our brains are wired to find patterns we recognize, we sometimes pick out words and sounds even when they’re not entirely clear. We hear stories of messages coming through radio noise and now we use electronic devices to make it easier and clearer.

What is it actually doing?

Most spirit boxes spin through at least 7 different radio frequencies every 0.3 seconds (by default) which is too fast to pick up the actual radio station but slow enough to allow a dead person (or other spirits) to gently manipulate the signals to form a human voice to communicate.

Some are a little more advanced and use complicate voice recognition and other technologies to help pick out words from jumbled white noise.

How to Use a Spirit Box 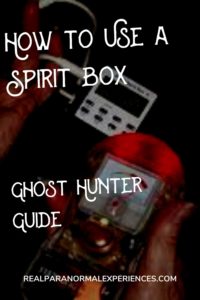 Paranormal researchers sometimes find their own styles here but there are a couple of general guidelines.

I touched on this on the how-to-find spirits guide but, often, the location of your ghost hunt can matter more than the equipment you use.

You can start using the box anywhere you want but you’ll find the most success in an area more likely to have at least one ghost. Some types of ghosts stick around the place they died or a place that held significance to them.

Many hunters begin a spirit box session by introducing themselves, briefly explaining that the ghost can use the box to communicate and then beginning with basic questions.

Hi, my name is ______, if there is a spirit who would like to talk you can use this box to communicate with me. Can you tell me your name?

Sometimes you’ll get an immediate answer (depending on the location and equipment) but often we have to wait.

A spirit box will constantly skim between radio signals and sometimes pick up idle chatter and random noises from local radio transmissions and interference. This, obviously, doesn’t always mean a ghost is trying to communicate with us.

What we’re looking for are intelligent responses.

With practice, you’ll start to filter out the random sounds coming from the box and hone in on the actual responses. Sometimes you can just wait around for it to happen or, with many devices, you can tinker with the settings a bit.

The types of questions you ask should always start simple. I like to ask for a name first because this allows you to speak directly to the same spirit at a future date if communication fades.

Note: communication does tend to fade without warning. It seems to take a lot of effort for ghosts to communicate with us and the vast majority of meaningful conversations will stop after a few minutes. Knowing their name means you can reach out to them again.

If the spirit box is moving between radio frequencies too slowly it’s going to pick up idle radio chatter but too quickly and you might not pick anything up.

This is as much of an art as it is a science but if you’re not getting an intelligent response it might be there’s nothing in that area or it might be that the frequency just doesn’t match the spirit for whatever reason.

Slowly changing the speed the box moves between frequencies or the number of frequencies it checks can help. Continue to introduce yourself and ask questions until you get a response. If you don’t, move to a different area or try at a different time.

Do Not Taunt the Dead

Sometimes ghost hunting can be frustrating and often requires a good amount of patience to have a meaningful and intelligent response (depending on the location and equipment used).

One universal rule is no matter how frustrated you get you should watch your words carefully. Treat people with respect: alive or not.

I’ve seen beginner ghost hunters taunt a spirit to try and coax them into replying through a ghost box and there are so many problems with this.

At best a spirit is likely to ignore you because you’re not worth having a conversation with. At worst, you might anger a spirit capable of making you regret it.

We should treat anyone with respect but given the effort it must take a ghost or spirit to communicate with us through radio noises, I’d be polite.

Cross Confirm With Other Devices

This one is a personal choice but some ghost hunters don’t want to rely solely on spirit boxes for communication that there is a spirit in the area. They like to cross-reference this confirmation with other devices like an EMF detector or an infrared tracker.

Personally, I think it really depends on what you’re trying to do. If your goal is simply to communicate with a ghost then an intelligent conversation through EVP is more than enough. If I’m trying to pinpoint a location of a spirit or the message is faint that’s when I’d bring in other equipment.

Is a Spirit Box Safe to Use?

I feel like I should cover this answer in a whole bunch of disclaimers.

Throughout history (and the modern-day) there are stories of ghost hunters and people minding their own business and being attacked by ghosts.

There’s perhaps an argument that reaching out to the paranormal with something like a spirit box could draw the attention of a spirit you’d rather not hear from.

There are certainly those that would say that using a ghost box is giving an open doorway for contact with something better left alone. I think it’s probably up to your own judgment but there are many people who use spirit boxes without major incidents other than some chilling conversations.

The box itself is often simple technology swapping between the AM and FM frequencies to give a spirit a way to communicate. The box in itself is not the problem so much as a spirit who might have ignored you otherwise wanting more of your attention.

I’ve seen paranormal investigators come out with some interesting designs to further their EVP conversations but, in general, I’d say it breaks down into a couple of main types.

The more paranormal investigation has become popular – the more spirit boxes have become available. I wish I had access to this kind of equipment when I first started.

They have all the bells and whistles and nobody will be surprised if you pull one out in a ghost hunting group. They all probably have one in their bag.

A little bit more hit and miss, there are a couple of different types of software options that perform a similar function to a physical spirit box.

Some swap through radio waves the same way as a specifically made ghost box would while others use premade audio recordings and try to spot patterns.

Some of them have some extra bells and whistles like background music or flashing lights but (unless you’re trying to look cool for YouTube) there’s really not a huge benefit to doing this.

Warning: Be very careful with this. In general I always suggest a physical box or even a tape recorder if you have to. There is a lot of false tools out there which claim to do things they don’t.

Every ghost hunting group has the guy who builds their own spirit box. Often it’s a mix of an audio recorder and a AM/FM radio from the bottom of a cupboard.

Back in the day you really had to build your own because you didn’t have access to the devices we have today.

It can be a fun project to try and build one yourself but especially with the boom in ghost hunting popularity we’ve seen over the last couple of years it just isn’t worth it anymore.

How Much Is a Spirit Box?

You could use a software box (I’ve linked two free ones above) or try and build one yourself but it really depends on what you’re looking for. The popular spirit boxes are popular for a reason and they’re made specifically for EVP communication and tend to have a lot more success.

Instrumental Trans-Communication or ITC is another term you might hear used alongside EVP. It’s a catch-all term for any kind of communication whether it’s through a spirit box, tape recorder or radio from the dead to the living.

It doesn’t always happen just to ghost hunters intentionally reaching out and there are a lot of stories of ITC happening out of the blue. Spirit boxes are a more intentional device to make ITC more likely and easier to understand.