When you think of Ghosts, most people think of the traditional forms, a figure from the past walking through the wall, or a child’s voice laughing inside the very same room you are sitting in, and there is no one else there. But there are other ways the dead can walk the earth.

Some ghosts are easy to make out in photos or videos while others only become apparent when listening through specialized equipment. Some are considered a dangerous ghost capable (and even willing) of causing harm while others are more of a guiding spirit or completely uninterested in the living.

Understanding the types of spirits and ghosts you might find means you know what to expect from them and, if you choose to, which tools will best help you communicate with them.

These names have been passed down from centuries of ghost sightings, hauntings and possessions.

Note: When it comes to paranormal activity it’s hard to really speak with certainty. These are the general terms we use for the kinds of ghosts we see on a frequent basis but terminology overlaps and I wouldn’t take any of this as a hard-set rule.

A poltergeist is one of the most commonly reported ghost types. Probably because they’re the most obvious and can be seen with the naked eye when they’re really acting up.

These beings are the inspiration behind many spooky films of haunted houses where doors are seen opening on their own or beds start to shake at night while people are still sleeping on them.

More often than not, the poltergeists are previous owners of the home or building that it is haunting, and they are trying to get the current tenets to leave.

These ghosts are known as the noisy ones and can be heard talking, groaning, laughing, or yelling. They’re the common manifestation of angry ghosts and often seem to feel like their death wasn’t fair but they seem to be very much aware of the current situation (unlike the traditional interactive type). However, they usually really aren’t very dangerous, just obnoxious but they can certainly send a chill up your spine.

interactions with poltergeists often start out slowly and mildly and escalate from there. Because they can be more obvious, paranormal investigators often get very excited to communicate with them.

The traditional ghost refers to the most commonly seen form of ghosts that have been captured in pictures or seen by many people in the same location year after year.

These ghosts are spirits that have passed away but unable to move on for one reason or another. So they stay in the location in which they died and at times communicating with those who live there in the present.

Some of these ghosts will make their presence to the current occupants on purpose while others won’t even be aware they are dead, continuing on with their daily lives just like they would have before they passed. They often seem to retain at least some of their personality.

A common type of ghost in stories where a strange image or unsettling feeling is in a room but nothing really happens. Often these ghosts have little to no interest in us but, for whatever reason, we can sometimes see them with a naked eye.

A common type of ghost to pick up with something like Ghosttube SLS but they’ll often not react to attempts to communicate with them. 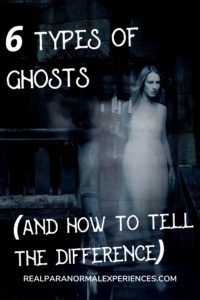 Funnel Ghosts (also known as ghost orbs) are the types of ghosts most often captured in photographs. The people in the picture often don’t even notice it is there until after the film has developed, or they look at the picture taken later on.

Funnel Ghosts are just as they sound, a funnel of light that flashes its way into a space with no reason for it to be there. Many believe these ghosts are family members or previous owners of the home you are in trying to make their presence known.

It is very common for the temperature of the location in which the funnel ghost is spotted to become cold quickly and then warm back up after it has left.

Like the Funnel Ghost, most orbs are captured in photos or videos. They are small balls of light that can be seen moving about dutifully and fast. These orbs are believed to be the souls of the dead moving about the earth.

You can frequently see Ectoplasm ghosts in graveyards or even on-site of old battlefields. This form of spirit is most often noted as being a large area of fog or mist that hovers a few feet off the ground.

This dark fog can sit in one place for an extended period of time but most often is known for floating around, moving about the area as if it is looking for something or has a specific purpose.

These sightings have been described as a black, grey, or brown cloud that you cannot get too close to and can move about with ease.

Stories often seem a little vague here but generally, it won’t move as a normal mist would. It might go against the wind or curve in different directions, especially towards something (or someone).

A wraith is often what we hear about when we’re talking about non-earthbound spirits. They manifest as vague forms but these seem to be the closest to kids putting a sheet over their head and saying ‘boo’.

A wraith often floats above the ground and wanders through physical obstructions like walls without hindrance. They seldom seem to make any noise perceptible to human hearing but can be picked up by a spirit box.

Demons are associated with the devil. They are said to be evil spirits that are able to take over the body of man or woman to fulfill whatever task it is they are on earth to complete.

Many believe that demons are fallen angels working to create a rift between humans and god by having the living do immoral acts.

Demons are the reason behind exorcists. An exorcism is a ritual performed when a demon is believed to have taken over a human’s body.  This ritual is done to extract that entity from the body and sending it back to where it came from.

How to Spot the Difference in Types

Sometimes the difference in types is immediately obvious but sometimes there’s an overlap. For example, an interactive ghost might (for whatever reason) be loud and could be mistaken for a poltergeist if they happened to be shouting even if they’re not trying to get your attention.

Use these rough descriptions as a starting point and go from there.

Sometimes the best way to find out exactly which type you’re dealing with is just to ask. With the shouting interactive ghost example, using a spirit box you’d get an idea of what they’re saying and if they’re just talking to themselves it’s just a personality going about their own business. If they start screaming threats then you know it’s a poltergeist.

Which Types of Ghosts are Evil or Dangerous?

A loaded question and, especially given the overlap and confusion between different types a difficult one to answer.

For the most part, none of these spirits are actively trying to hurt you. These are spirits of the dead that have been left on earth for one reason or another and are unable to communicate with the living.

Some ghosts are unaware they are dead and do not even notice you are there. They can continue on from the other side, believing they are still alive and living their day-to-day life.

On the other hand, other ghosts may be well aware they have passed and just want to interact with you. They may have unfinished business they need help fulfilling, or they could be loved ones or family that just want to say their final goodbyes.