A cornerstone of paranormal investigation and paranormal photography, ghost orbs are a popular topic in the ghost hunting community. What makes these mysterious little balls of light so interesting?

Ghost orbs are physical manifestations of spiritual energy in the form of an orb. These orbs show up on film most often, but can also be seen with the naked eye. While there are many different explanations for ghost orbs, none truly explain the existence of these ghostly balls of light.

Orbs are the most common type of ghost for civilians to find, but since they’re often innocuous they can show up more than we sometimes realize.

What Is a Ghost Orb?

The most simple explanation of ghost orbs is that they are ghosts in the form of orbs of light. This is an overarching explanation, and won’t always be true in every case of orbs.

While it is certainly true that a ghost can manifest itself as a ghost orb, a ghost orb can also come about from a general overabundance of spiritual energy. Graveyards especially are orb hotspots, and photos taken in graveyards can show dozens of orbs. 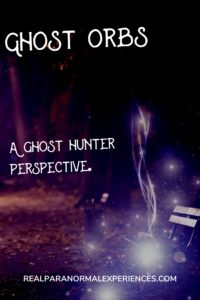 So rather than saying that these orbs are always a manifestation of ghosts, it’s more accurate to say that ghost orbs are manifestations of energy. These orbs can appear in many different sizes and colors and can pop up almost anywhere.

Unlike other paranormal entities, ghost orbs love to make themselves seen on camera. It’s rare to see a ghost orb with the naked eye, but it does happen occasionally. If you want to have the best chance at seeing a ghost orb, bring a camera along.

Like we described earlier, graveyards are great places to see a potential ghost orb, but a battlefield at night or an infamous haunted house can also be ghost orb havens.

The elusive energy balls have also been known to attach themselves to an individual, appearing in that individual’s photographs no matter where the location. What a strange compliment to be a ghost’s favorite person!

Ghost orbs can’t physically interact with the living world. They are limited to visual contact and have been seen on pictures taken from phones, expensive professional cameras, security camera footage, and night vision cameras. They don’t discriminate between camera types!

Orbs are also a favorite of ghost hunters since they are easy to photograph and don’t have obvious ill intent like a poltergeist or another type of ghostly apparition.

Ghost orbs can look mildly different from picture to picture, but they all have a basic form and appearance.  Paranormal phenomena like spirit orbs are highly sought after by ghost researchers, and when it comes to photographs,  a large, bright spirit orb might be the best evidence of ghosts that a ghost hunter will ever see.

Ranging in size from an unobtrusive pinprick all the way to bigger than a person’s head, ghost orbs don’t follow any hard rules when it comes to size.

As you would expect from the name, ghost orbs are circular orbs that float in the air, usually lit from within. They are a form of energy that a spirit or other paranormal entity can use to manifest itself. While orbs don’t invoke the same feelings of fear as other types of ghosts, they still shouldn’t be ignored.

Depending on their energy level, ghost orbs can appear as dim energy spheres all the way up to blazing orbs of light. It really all depends on the amount of spiritual energy the ghost orb has, and how brightly it wants to manifest.

It can be hard to catch a ghost on film unless this ghost is a spirit orb. Ghost orbs can even catch the focus of the camera lens, making for a blurrier picture.

It can be hard to differentiate between a ghost orb and an errant flash of light on film.  Many people who experience the ghost orb phenomenon may try their best to find a logical explanation for orbs in photos, but while some orb-like objects may have logical explanations, there are some tell-tale ways to determine whether you’re dealing with a ghost orb or dust particles.

Particles of dust and raindrops are the two most common scapegoats when it comes to spirit orbs. When a picture is taken with a flash, this flash can illuminate and reflect off of specks of dust and water droplets, making them appear orb-like. Any other light source can cause these light reflections as well.

The best way to differentiate between some dust and a ghost orb is to take video evidence along with your still frames. Dust and water will move, unsurprisingly, like dust and water. Floating aimlessly or falling straight to the ground.

Spirit orbs on the other hand will move with intention, or if they are fixated on a certain person or object, remain stubbornly in place. Their movements are intelligent and intentional. A real ghost orb would never want itself to be mistaken for dust pollen.

Regular ghost orbs aren’t all that scary to look at, but what about when a ghost orb appears with a face? This can be frightening to observe, but these orbs are probably just stopping by to wish you well.

Ghost orbs with faces can be loved ones that have died coming to visit, or spirits struggling to manifest a truly human form.

Ghost orbs that have faces are often seen in photographs taken at large, important events like weddings, birthdays, or maybe the birth of a longed-for grandchild. If you look closely at your ghostly visitor in your pictures, it isn’t odd at all to recognize the face staring back.

A visitation from a ghost, even one of a beloved person, can be unsettling. These moments should instead be greeted with joy. This spirit spent a lot of energy manifesting for you and should be welcomed with open arms.

Ghost orbs are a haunting paranormal phenomenon that is being seen more and more often as our world becomes reliant on cameras. Ghost orbs usually appear on film, especially in areas of high spiritual energies.

Ghost orbs aren’t malevolent and should be appreciated as the stunning shows or spiritual energy that they are!