One of the more popular spirit boxes, the P-SB7T Spirit Box, was one of the first devices made specifically for paranormal researchers and not a pile of Radio-Shack equipment or crudely adapted civilian equipment.

The P-SB7 Spirit Box was popularised when it appeared on Ghost Adventures, but it certainly isn’t the only ghost box around. Does it work? How do you use it? Is it worth it?

Every member of my team has at least some experience in paranormal ITC research, as it’s become a staple in the field. I got them sat down (bribed with a pizza) to look at the pros, cons and whether or not it lives up to the hype.

We’ll also touch a little on how to use it if you already have one, but for those on the fence and building up your kit bag, let’s look at the device itself first.

There’s not a lot of money in ghost hunting, so Real Paranormal Experiences is reader supported, and this page may contain affiliate links. We get a small commission for anything you purchase, and we appreciate the support.

Before looking at the device itself, I’d make sure you’ve at least skimmed my guide on how spirit boxes work. They’re one of the first things I suggest people get (unless they’re working with a team who already has one).

Update: As of 2022 we have a brand new model of the SB-7 which includes even more features than before. If you’re in the market for a spirit box – make sure you check out the latest model here.

In short: The P-SB7 spirit box sweeps through local radio frequencies in order to create white noise. While most ghosts and spirits aren’t (easily) able to communicate to the naked ear, they’re able to influence this synthetic noise. We can ask questions, get relevant responses and use the device to talk to ghosts around us.

We used to have to use a digital voice recorder and hope for electronic voice phenomenon (EVP), which was incredibly time-consuming and very hit-and-miss because things had to line up just perfectly to get a response. 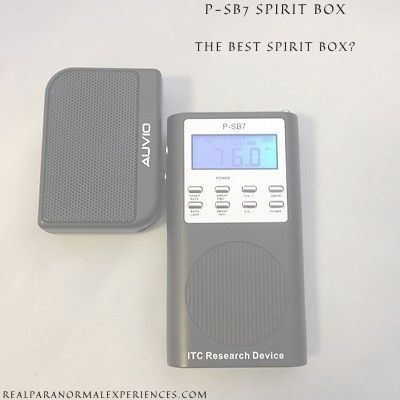 Devices like this are absolutely better than adapting civilian equipment, but how does it stack up to other professional spirit boxes?

In short, it has better radio frequency coverage than most boxes, it’s easier to use, and it makes EVP sessions easier than ever. For either beginner ghost hunters or professional paranormal investigators, it’s one of the best spirit boxes and my #1 pick unless you’re using a custom build for some very specific session circumstances.

The P-SB7 spirit box is a popular choice. It’s one my team uses, it’s often the one I carry myself, and it’s a common sight in the ghost tourism industry, but it’s not the only option.

The P-SB11 is a more advanced but more expensive version of the SB7.

It brings simultaneous sweep modes and is probably the clearest piece of ITC equipment out there at the moment. It’s also been used on Ghost Adventures and whether it’s worth the additional price tag.

It’ll be a little clearer and some professionals will be drawn to that but with the higher price tag and lower availability, it’s not a necessary upgrade. I know a lot of passionate ghost hunters who don’t feel the need to upgrade.

The SBox is pretty similar to the SB7 in that it does forward and reverse sweeping, but it comes with a couple of nice features.

The volume is a bonus so you don’t need to use an external speaker or earphones. However, the frequency sweep is not great. It gives a lot of false positives for ghost communication success as even on the fastest setting it moves through frequencies far too slow.

This means you get a lot of contamination and a lot of what you’re going to hear are not spirit voices, just local radio stations. I’d stick with the SB7 on this. 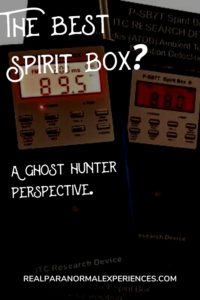 Paranormal investigators often have their own strategies when using a spirit box. Especially if they’re familiar with the area/spirit or they’re using other equipment in combination with ITC.

Because of the features of this model, there’s not a whole lot you really have to do with it and we’ve covered making communication in the paranormal school already. But, as a quick rundown:

I don’t (personally) get too excited by just a single response as it could just be background radio pollution. Instead, I want intelligent responses to at least 2-3 questions before I know I’m actually communicating with a ghost.

As with anything in paranormal investigation, this is always going to be a debate. In my experience, EVP is absolutely a thing, and the spirit box P-SB7 is one of the easiest ways to experience it for yourself.

That said you will absolutely get false positives with a spirit box’s use in almost every session. The SB7 model does a good job at cleaning the static and white noise, but it can still take some practice to spot a real response.

The SB7 on Ghost Adventures: Was It Real?

It sometimes surprises newcomers that Ghost Adventures isn’t faking it. The equipment they use is the same as most paranormal enthusiasts – and that includes the SB7.

While it certainly wasn’t the first ghost box around, it was maybe the first time this type of ghost hunting equipment has been pushed into the limelight like this. Often the footage that makes it into the show misses out on some of the boring waiting-around periods (all professional investigators become all too familiar with this) but it actually does a fairly good job at showing the spirit box in action.

The only part of this I would warn about is they occasionally use single responses from the spirit box whereas most in the paranormal field won’t consider it a meaningful conversation until you can string together intelligent responses to multiple questions.

There’s some confusion on this, so I’ll try and make this easy:

There is no SB7 spirit box app. The SB7 is a specific piece of ghost-hunting gear. There are some ITC apps out there, but the vast, vast majority are useless and just spit out random words and not actual spirit communication. Don’t use anything claiming to be an SB7 app – it doesn’t exist.

If you are just looking for an app (and not the actual piece of kit), I would suggest looking at one of the few useful ones the (free) GhostTube app.