The GhostTube app is (currently) the most popular ghost hunting tools available for mobile phones. How does it stack up, how do you use it and is it a genuinely useful tool for paranormal investigators?

My review: Useful! It won’t replace thousands of dollars worth of professional ghost hunter equipment but if all you have is a mobile phone Ghosttube is a solid choice.

Possibly the best app available just now and it’s dead helpful having this kind of capability in your pocket. It’s one of the (few) apps actually worth picking up.

The main difference Ghosttube has over the alternative apps available is it doesn’t pretend to be a spirit box on a device that has no AM/FM radio signals. It serves a genuine purpose and makes for a semi-accurate and highly portable tool.

There are two GhostTube apps available:

The original functions much like a usual spirit box on a mobile device. Not as accurate as a purpose-made box, but usable.

Where this app really shines is the SLS version. This is what I use and I heavily suggest upgrading.

Ghosttube is showing up in a lot of hobbyist ghost hunter paranormal videos because it’s so easy to work with and the barriers to entry are so low. The app itself lets you save the videos so you can share them with other ghost hunters in your area and online.

I took the current version out for a spin to put together a quick guide on what works, what doesn’t and how you can use the Ghost tube app properly.

Like most detection apps, it’s an app that will help you detect and communicate with ghosts and spirits. Probably one of the most advanced apps out there it uses advanced sensors with your phone’s camera to help spot humanoid bodies.

While most software tools just try and use sound to communicate with ghosts, GhostTube will actually help you spot where they are and sometimes it’s clear what they’re doing.

It’s the low-budget equivalent to having an SLS Camera on your phone which are generally pretty high budget plus they’re only useful if you have them on you. Even if you have the proper kit at home, you almost always have this in your pocket.

There are certainly false positives but, yes, GhostTube works well for what it is. 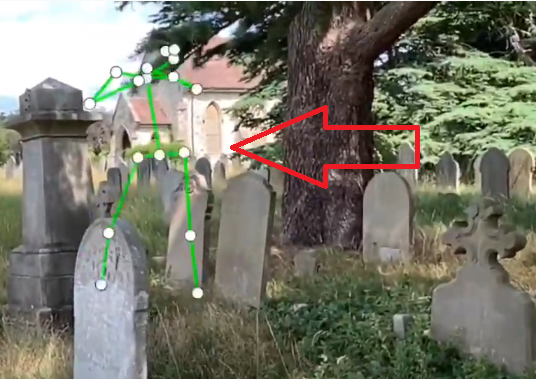 Not every figure it makes out is going to be a spirit but I’ve been toying with it long enough in combination with my usual tools and there are some clear overlaps often enough.

How to Use the Ghosttube App

If you’re a seasoned ghost hunter most of this will be pretty straightforward to you. Make sure your phone is charged and turn it on. It functions best with natural light so maybe avoid turning your phone flashlight on.

The premium version of the app does have better low light support but I still had better success while there was still some sunlight left in the evening.

The first (and hopefully obvious step) is to download the app. Available for Android and iPhone:

Where you use the app is largely going to dictate your results. Ideally, you want to use it in an area you either know has paranormal activity or is likely to.

There’s a reason many of the videos you see are taken in a cemetery.

Depending on where and when you are will dictate how patient you need to be but you might need to be patient. Sometimes you might see something right away but ghosthunting is usually a waiting game especially for the more meaningful encounters.

Communication can be key here. Rather than just watching shapes, try and communicate with them. The more you reach out and get their attention the better a session you’re likely to get.

You can swap between modes using the LIDAR sensor or the night vision option but the most common is the SLS full-body detection.

Once the app detects a figure it’ll emit a high pitch sound alert so you won’t miss it. Sometimes figures might come and go and other times they’ll stick around for a while.

If you lose an aspiration, scan the area to see if it’s moved.

The app store is very crowded with fake apps playing pre-recorded soundbites and pretending to be spirit boxes and legitimate tools.

I cover a lot of ghost hunting tools and equipment but in terms of an app for your phone, there isn’t anything else that rivals it at the moment.

The closest might be the Afterlight Box if you’d rather use a computer than a phone.

The more popular way of spotting humanoid shapes like this has historically been with an Xbox Kinect camera which was purpose-made for this.

There are pros and cons to each. The GhostTube SLS app has been specifically made for ghost hunting while the Kinect SLS just has better quality hardware and works better in low light conditions.

The app brings portability and it’s always handy to have on you but it won’t outperform a normal SLS camera in terms of quality.