The REM Pod is one of the less common pieces of kit for ghost hunters but it’s also one of the few pieces of equipment actually designed for paranormal investigation and not just civilian equipment adapted for our use.

The Radiating Electro Magneticity Pod (or REM Pod) emits an electromagnetic field from a small antenna and looks for a field disturbance with an alert when it finds something. Making it not only one of the easiest tools for paranormal investigators but one of the most effective.

This is a quick guide on using a pod, the best one (in my experience) and how this little device has become one of the best ghost hunting tools.

What is the REM Pod? How Does It Work?

Originally designed for the Ghost Adventures TV show (and featured on it several times) it slowly started to become publically available to professional and hobbyist ghost hunters.

By emitting a low electromagnetic field the device detects energy changes within a fairly small proximity and alerts you when a ghost or spirit comes near.

It’s an easy piece of equipment to use so beginner ghost hunters can do well with it but even professionals will often use one to make longer sessions easy or to watch multiple areas at once. 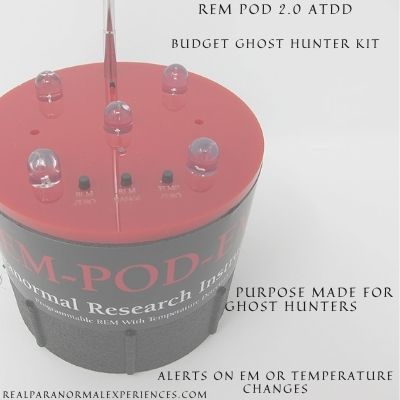 I’ve seen a lot of questionable REM Pod knock-offs floating around but there’s only one device that I’d actively suggest getting. The REM Pod 2.0 EMT ATDD.

This is the one I use. It has a permanent spot in my ghost hunting kit and we tend to use multiple devices for watching a large area or multiple rooms in a house.

The ambient temperature deviation detection (ATDD) feature is a nice bonus. As well as watching for magnetic fields it also has a temperature gauge to alert for hot or cold spots around the device. This means you replace the need for a thermometer for ghost hunting and get a double confirmation in one piece of kit.

The device is similar to an EMF reader but tweaked specifically for ghost hunting. You could use one of those instead but they’re just less made for the purpose.

You can find a lot of cheaper knockoff devices floating around as well but I’ve seen some dodgy devices which either break easily or trigger wildly and don’t seem to actually be doing anything. It’s hard to recommend one of those.

Ghost hunting has a big problem with fake apps and the Rem Pod apps floating around are not worth using.

Then you still have lower quality results than using a device specifically designed for ghost hunting.

How to Use a REM Pod (Properly) 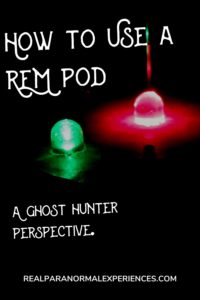 As with any kind of ghost hunting equipment: positioning matters. It doesn’t matter how good a device you use if there are no ghosts or spirits around in the first place.

However, unlike most equipment, there’s not a lot you actually have to do here. It’s the plug-and-play version of paranormal investigations. Switch it on and wait for it to alert to the presence of ghosts.

Whether it’s a kitchen table or a gravestone, my process is always the same. This is obvious stuff, but worth doing. Especially if you’re relying on the device before reaching for any more equipment (which I’ll get to in a moment).

My team will often use the device to watch different rooms or areas while they wait for a known or suspected ghost to arrive. Rather than constantly trying to reach out to the ghost, the REM Pod allows you to just sit back and wait.

Following Up With Other Equipment

While this device is great for watching multiple areas at once it’s limited to just that. If we want to establish contact with a ghost or get further confirmation to avoid a false positive and rule out external interference, we can use one of the other main bits of equipment:

How to Make a REM Pod

Considering how much I rely on a REM Pod for bigger cases or wider areas be very sure you know what you’re doing here. I’ve covered a few homemade ghost hunting equipment guides and this is one of the ones which requires a little more technical know-how.


With a disassembled EMF reader or an Arduino and some parts from Radio-Shack, you can put something together yourself if you’d rather.