A staple in any ghost hunter’s checklist is a thermal camera in most situations. Allowing us to pinpoint exactly where a spirit is and catch graphical evidence at the same time.

On the pricier side of ghost hunting equipment but, if you’re serious about being a paranormal investigator, it’s an essential item.

What do you need, how do they work and how do you use them to investigate the paranormal?

Why Do Ghost Hunters Use Thermal Cameras?

While some equipment has been developed specifically for ghost investigators (like a spirit box for example), investigators have also adapted civilian and military equipment.

In this case, it helps us spit a difference in a temperature range and has become a staple in professional paranormal investigation equipment.

While we can use EVP equipment to try and listen for them or sometimes an SLS camera to try and pinpoint patterns imperceptible to the human eye, a thermal camera gives us one more chance at confirming and documenting a presence. It can also give us an insight into the nature of a ghost. 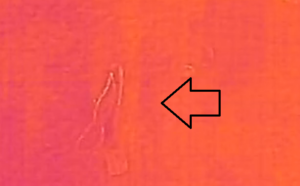 What Is a Thermal Camera?

‘A thermometer with a camera lens’ as a member of my team often describes it. It’s a specialized device measuring infrared radiation (IR) and (the end result) is it allows us to see heat signatures.

Why Do Ghosts Appear on a Thermal Camera?

Warmer areas will appear differently on a thermal camera allowing us to pinpoint both hot and cold spots compared to the ambient temperature of a room or area.

We sometimes talk about temperature drops or cold spots in a room. Sometimes ghost stories reference the feeling of a cold breath or touch on parts of the body. Most spirits don’t appear in the light range visible to the naked eye (at least, not constantly) but thermal imaging increases our range.

Different spirits can have different effects on the temperature and using infrared light we’re able to spot these differences in either direction.

Note: You might have heard of ghost orbs showing up in traditional photos. An interesting phenomenon but not the same as using a thermal image to purposefully find one. 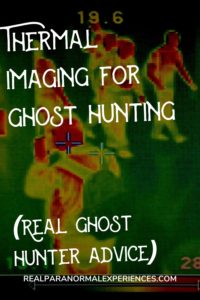 As with many things in paranormal investigation, this is as much art as it is science. There are reports of incredibly clear paranormal entities appearing on a thermal image but these don’t seem to be the norm.

With most encounters, you’re going to detect areas or patches of temperature variations. This by itself isn’t confirmation of a spirit so you’ll need to cross-check it with something else.

It’s still an incredibly useful tool, even for amateur ghost hunting. Often one of the biggest problems I see when trying to have an intelligent conversation is getting the rest of your equipment to the right spot – thermal imaging is a quick and easy way to do that.

I’m not going to pretend to be a world-class photographer or anything. I know the basics of what some of the specs mean but these would be my picks specific to ghost hunting.

Generally, there’s a couple of things I look for:

Some (like the trial camera) have additional features which make them perfectly fitted for our use as well.

One of the most popular (and portable) choices for a thermal camera at the moment. Rather than a completely stand-alone device, this converts an existing phone or tablet (Android or iOS) into a professional piece of ghost hunting equipment.

It turns mobile devices into a useful piece of kit but, be warned:

Warning: Please don’t fall for the fake apps which claim to do this and stick a glowing red filter over your normal camera. This is a specialized camera that attaches to your phone. Not just an app.

It’s as lightweight as they come, has an insanely good range for such a compact device and the software they use creates great video quality.

Flir does have a standalone device (which I’ll get to) but for personal use, this would be my suggestion.

It’s mostly durable. Just be careful with the adjustable connector and the quality is easily good enough for personal use. If you plan to use it for professional use then the good enough quality might not be enough and the watermark on the footage might annoy clients. Though if you notice thermal footage on Ghost Hunters still contains the Flir watermark.

Just a heads up: the recent popularity of ghost hunting seems to have driven a big spike in demand for these cameras and it can be hard to find them in stock sometimes.

A step up from the One Gen 3 is the TG165-X. If you really have the budget and want a dedicated thermal camera for ghost hunting then this is the one to go for.

It includes a built-in LED display, a high-temperature range and a laser pointer if you’re really trying to narrow things down. There’s a large internal storage and a long-lasting rechargeable battery.

It’s a higher price tag compared to any of the other alternatives but it’s a durable piece of kit and worth the investment if you’re looking at paranormal investigation on a professional level or you’re around for the long haul.

This one might surprise you and it’s not something I commonly see ghost hunters use but trust me.

While not the same thermal vision as many cameras have, I think this one needs an honorable mention because it does have an IR setting and some additional benefits.

Definitely not designed for ghost hunting but this camera is actually designed for civilian use tracking animals on trials.

Why it works so well for paranormal investigation is actually the same reason it’s so popular with normal hunters. If you suspect paranormal activity in an area you can hide the camera away overnight leave it to track movement using its IR camera. You don’t have to be there to operate it, it’ll run for hours on end capturing photos or video when it detects movement and all you have to do is retrieve it the next day.

Rather than pouring over hours of video footage or having to stare at the screen to find movements and temperature variations, with a trial camera you only need to check through the interesting moments of the night.

Far from a complete equipment list, these are the common alternatives to finding environmental fluctuations without using thermal radiation.

You’ll often see paranormal investigators use a thermometer to watch an overall room for temperature changes. While this is useful, they’re not quite as good as the camera for pinpointing an exact area.

If you’re unsure about a reading you’re getting, they can help to double-check what the camera is telling you too.

I’ve covered the SLS Kinect camera before and the technology is different. Often homemade with a camera from an Xbox 360, it does use an IR camera but in a very different way and attempts to pinpoint movements and joints.

The software attempts to spot the forms of people but, with a little tweaking, ghost hunters use it to try and spot spirits. It works differently from the thermal camera and can be great in combination to provide confirmation or further detail.

How to Use a Thermal Camera for Ghost Hunting

It’s pretty situational depending if you’re trying to watch a specific area or you’re scanning around. With something like an IR trail camera, you could leave it watching a hotspot (like a cemetery) or handheld thermal cameras can be used to sweep rooms or areas looking for activity.

Take it slow and steady. It’s easy to find false positives or create hot spots when there wasn’t one before.

Remember a big part of being a paranormal investigator is patience. A good thermal camera can speed things up but you still need to move slowly and carefully.

Rarely an issue since most paranormal investigation is best done in darkness, the camera is going to work better in darker environments.

Where they can really struggle is at dusk if you’re outside so I wouldn’t take them out until later in the day.

It doesn’t ever seem to matter how much experience you have. Especially when you start seeing signs of a genuine encounter with intelligent responses through EVP or a sighting – the adrenaline starts pumping.

It can be easy to miss things in the heat of the moment which is why I try not to delete camera footage until I’ve had a chance to go through it. It might be you spot something you didn’t see at the time.

Watch Out for Residual Heat

You might be surprised how long a heat signature can hang around from the living. Thermographic cameras will show footprints or marks from a member of your team leaning against a wall.

If you’re watching an area just make sure nobody walks through it or at least carefully watch as they do so you know which heat spots were accidental and which are actually from the other side.