We’ve been using flashlights for ghost hunting long before we had actual purpose-built equipment.

A flashlight not only helps us to detect and communicate with ghosts but it’s also a helpful security tool as most paranormal investigations take place at night. This is absolutely essential gear.

This is my quick list of the best ones to use and how to actually use them as a ghost hunter.

Any ghost hunting teams worth their salt will have more than one flashlight. Personally, I like to carry at least one light for making sure I can see in the dark and make sure I can move quickly if I need to.

I also like to carry one for performing an easy flashlight session (which I’ll get to in a moment) but if you just want one piece of gear to do both jobs, let’s start with my first pick: 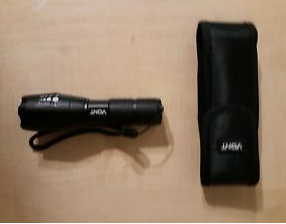 You might see paranormal investigators spending hundreds of dollars on equipment but this little tactical flashlight is a fraction of the price and will work for 99% of us.

They’re light, durable and come as a pack of two for a low price point. They’re reliable (I’ve put them through their paces) and easy enough to trigger if you want to use them to try and communicate with a ghost.

A beginner ghost hunter (or an experienced one) could do worse than including this in their pack. 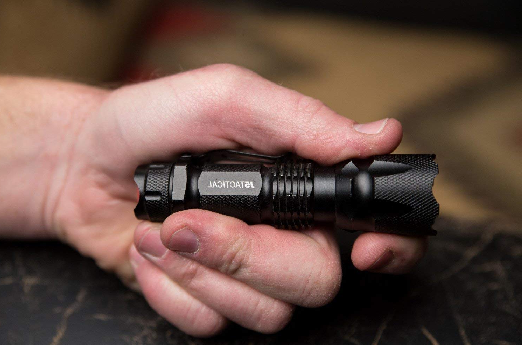 If your budget is a little higher (and you have the space in your bag) then this tactical flashlight is the way to go.

USB rechargeable, high power and durable as hell. It’s a bit heavy but ideal for very low light conditions and this is the one I take if I’m going underground.

Swaps between a spotlight or floodlight mode and is enough to trigger if you wanted to use it for a flashlight session.

What to Look For

If, for whatever reason, you don’t like my picks (I’m totally not offended) here’s my last bit of advice before we touch on flashlight sessions.

For flashlight sessions where you’re inviting a ghost to communicate with you using a flashlight, you want to make it as easy for them as possible.

Most spirits don’t have the ability to touch or exert much force and we used to specifically break flashlights to make them easy to trigger. Instead, now we use a flashlight that has a hair-trigger and will reliably flash.

There are people who use Ultraviolet (UV) light as a flashlight and I’ve seen ghost hunters swear by them as a solid kit choice.

However, I’ve never seen any evidence to suggest that UV light is actually useful in detecting paranormal activity. Shining it on surfaces will certainly detect something or other but it’s usually something left behind from the living and not paranormal entities.

Where it can be useful is if you’re also using night vision. If you point a white light torch near a night vision headset or camera you’re going to blind yourself for a moment.

For the most part, a UV flashlight is an extra expense I don’t fully see the need for.

I get asked about this brand because they’re common in paranormal investigator shops but I’m not a huge fan.

These are often bundled and sold alongside other ghost hunting kit or given away free. They’re not a bad backup but fairly low quality compared to some proper flashlight brands.

Worth keeping with your equipment if you happen to get one for free but I wouldn’t use it as a primary light or go out of my way to get one. 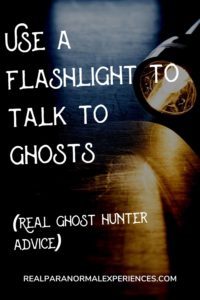 A quick disclaimer: I’m not a huge fan of flashlight sessions for ghost hunting. When we didn’t have much equipment it was the only option a lot of us had but these days it’s much easier to communicate with ghosts and flashlight sessions should really only be used if you have no other option.

I would much rather use a spirit box instead.

I’ll cover this briefly, however. It can be useful to know when you have no other equipment available.

What Is a Flashlight Session?

When a ghost can’t physically speak or interact with us you can still communicate by allowing them to toggle the light on or off. All the spirit needs to do is trigger the light once for you to get a noticeable answer to a question.

Often this kind of session takes patience and we use a simple system like one flash for yes and two for no. I wouldn’t suggest trying to use something more complex (like morse code). If a ghost is able to have that much control over the light, you should use something to allow you to have a more intelligent conversation.

You’ll probably have seen horror movies or stories with lights flickering. This isn’t entirely just based on Hollywood as some spirits do interfere with electrical devices. Communicating with a ghost with a flashlight gives them the opportunity to do it in a useful way.

How to Do a Flashlight Session

Best done anywhere dark enough to notice small flickers in the light, simply set the flashlight down in the off position and introduce yourself.

If you know the ghost by name, call out to them. Introduce yourself and explain how to use the torch. One flash for yes, two for no. Then ask your question.

As with most things in paranormal investigation, patience is required. Continue to ask questions and explain how to use the light until you get a response. It’s important you’re using a flashlight that is easy to flicker on and off.

If you need to, you can fold up some foil and open up the flashlight to bridge the gap to the batteries (carefully) and make it a lot more sensitive than just the button.

Once you begin to get answers, you might need to remind them of the yes or no system if the flashing becomes too fast. If you’re consistently not getting a reply then you might need to make the interaction with the light easier for the ghost.