Easily one of the most popular ghost hunting tools around – an EMF meter (or Electromagnetic Field Detector) is one of the easiest ghost detectors and something most ghost hunter teams will have at least one of.

I’m going to cover the best ones for ghost hunting, why they’re used and how you can use them in your own paranormal investigations.

I pulled open my own kit bag and that of the teams I’ve worked with to find the top EMF readers for beginners and professional paranormal investigators alike. There are a lot of overpriced options on the market these days from less than reputable sellers but these would be my top picks.

Realistically any of the best-selling EMF meters for civilian use will work to some extent but these are the ones you’ll often see professional ghost hunters carry. Avoid any of the brands trying to charge you extra just because they slapped the term ‘ghost hunting’ on a sticker. 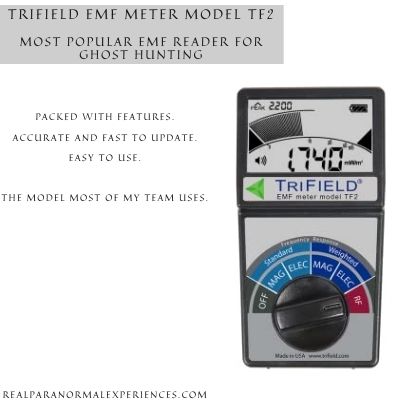 The most popular EMF reader for ghost hunting. This is the device I use and the one most of my team works with.

It Covers RF/Microwave, AC electric and AC magnetic EMF pollutions and it’s the most accurate device I’ve worked with. Easy to use, fast to refresh and with a backlit screen it’s ideal for ghost hunting.

I’ll cover a more complete guide on how to use it (and the paranormal academy covers them as well of course) but the Trifiend does a good job at detecting minute EMF changes without giving false positives constantly. If it wants my attention there’s usually a good reason for it.

Having the option to switch between standard and weighted (more focused on higher frequencies) means you’re going to detect things that most cheaper devices miss. It’s a unique feature and I honestly don’t know how useful it is for civilians but for ghost hunting it allows us to detect things we’d otherwise miss.

It’s a more expensive option but if you’re serious about being a ghost investigator it’s the one I’d suggest for the most reliable results. Considering an EMF detector is a staple in most kit bags, the investment is going to be worth it.

The only downside (other than the higher price) is it runs on a 9V battery. It lasts a long, long time but it would be nice if it had a rechargeable battery.

If you’re a beginner or looking for something a little more moderately priced, there’s another option: 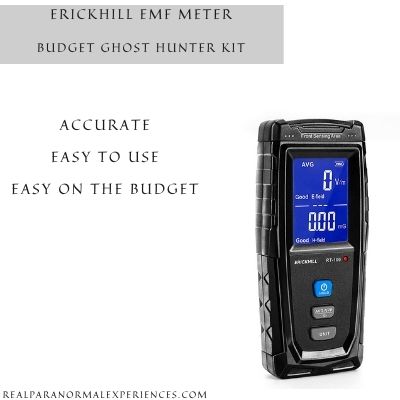 The ERICKHILL is our budget pick for aspiring ghost hunters. It’s often the one I’d suggest to beginners however they often do end up upgrading to the Trifield in the long run.

It works in much the same way. Turn it on, make sure the buzzer is enabled and let it run. It uses a rechargeable battery (which is a plus) and is much kinder on the wallet – however it does lack some of the features and won’t catch smaller disturbances as well.

Why an EMF Reader for Ghost Investigation?

Almost every paranormal investigator I’ve met (and I’ve met a lot) will use fluctuations in magnetic fields as a way of spotting paranormal activity. It’s a quick way to confirm the presence of a ghost in an area and ideal for leaving to alert when a spirit enters a room or area.

It’s fairly limited in that all it gives us is some confirmation however it’s probably the easiest way of scanning for ghosts quickly and easily – which we can then follow up with other tools (which we’ll get to in a moment).

What Is an EMF Meter?

An EMF meter measures the electromagnetic radiation around it. They’ll often alert to sudden spikes or changes and (like most paranormal investigation equipment) is originally meant for civilian use but finds a place in any kit bag.

How to Read an EMF Meter for Ghost Hunting

Having the right tools for the job is the first step but you still need to know how to work with them. If you just switch your device on and swing it around wildly you’d get a lot of false positives. Remember – not every blip is a sign of paranormal activity.

You can use an EMF meter in much the same way as you would a thermometer for ghost hunting. Slowly sweep it through an area looking for electric fields caused by a spirit (most likely not visible to the naked eye) or leave it to watch a room or area and alert when something enters.

Most electromagnetic field meter devices will come with an audible alert so you can set it to watch an area or leave it in the side pocket of a backpack.

If you have the time, you can alternate the frequency response time or look for different EMF pollution types but this usually isn’t required and I tend to leave my own just watching for magnetic field differences.

You might have heard me say this before but a good paranormal researcher will avoid confirmation bias. Just because we want to believe there’s a spirit doesn’t mean we should immediately assume there is. Look for another obvious source (electrical devices or wireless networking) and then use other equipment to follow up.

An EMF detector can alert on many different things. When it’s doing so out of the ordinary it should draw your attention but you should always follow up.

One single source is not concrete evidence for the existence of ghosts in the area. Once this confirms something is out of place you should fall back on another piece of kit like a thermal camera for ghost hunting.

Some of the common questions I get asked about EMF readers for paranormal investigations (feel free to ask anything I’ve not already covered).

Can You Record or Speak to a Ghost With an EMF Meter?

No. In theory, you could try and use an electromagnetic field to get a yes or no answer but it’s really not worth it. Even if your device does handle radio frequencies.

If you want to communicate, use the EMF reader to find the spirit and then other equipment (like a ghost box) to communicate with electronic voice phenomena (EVP).

Does an EMF Meter App Work for Ghost Hunting?

I’ve covered this in more detail but to sum it up… eeeeeeeh.

Most apps are completely fake and just beep randomly. Especially the ones claiming to be for ghost hunting. There are a couple that somewhat does the job however your handset has to have the right hardware. Even if it does it’s not going to do the same job as the picks above.

In short: I wouldn’t suggest it.

Which EMF Reader Does Ghost Adventures Show Use?

Ghost hunting shows like Ghost Adventures and Ghost Stories seem to use their own branded readers. I haven’t seen them for sale but I have seen some sellers claim to have the same hardware.

You do not need anything branded by a show or a ghost hunting store. Civilian EMF readers work the same way and you’re likely to get a better device for a lower price. Don’t get something just because a ghost hunting show used it.