Bloody Mary, Sara Sarita, Sandman. Ouija, candle games, mirror games. Somehow every generation knows and plays these strange “games.” One you may be less familiar with, because of its more deadly nature, is the Midnight Game (also called the 3 AM challenge).

The Midnight Game is said to be a pagan ritual used to punish members of the community for breaking religious codes or doctrines. Now, the goal of the game/ritual is survival, and it ends either at 3:33 AM or when the Midnight Man catches you.

Similar to playing the elevator game or calling haunted phone numbers there might be an element of risk to playing these games. Whether from the game itself or from attracting attention from something which may have otherwise not noticed you.

What is the Midnight Game?

The first digital mention of the Midnight Game is from over a decade ago, on a subreddit dedicated to all things creepy and mysterious. But its real-life origins are said to date back centuries, to pagans who used it as a means to protect and purify their group.


The first digital mention of the Midnight Game is from over a decade ago, on a subreddit dedicated to all things creepy and mysterious. But its real-life origins are said to date back centuries, to pagans who used it as a means to protect and purify their group.

Folk legends about the Midnight Game say that among certain sects of a long-lost pagan religion, the punishment for straying from the practices or group norms was completely unlike anything we see in our modern justice system.

Instead of relying on other members of the community to dispense punishment, or the individuals themselves, the recusant or wrongdoer would be forced to play the Midnight Game and let the Midnight Man decide their fate.

How to Play the Midnight Game 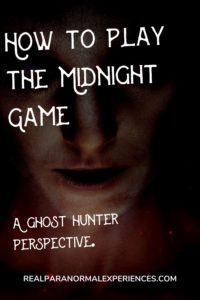 Maybe because we don’t know its true origins or maybe because of natural human curiosity, this old form of punishment has now become a game that allows you to invite this supernatural force into your home.

The goal of the Midnight Game is to summon the Midnight Man and evade him until 3:33 AM (a little after the witching hour). Because 3:33 mirrors 333, the biblical number associated with angels, when this time arrives the entity will be driven from your home and you’ll once again be safe.

Who is the Midnight Man?

No one knows where the Midnight Man comes from, or if he was ever human. Though there is no consensus about his origin or past forms, we can only assume based on evidence.

Because his power can only be exerted against those who summon him, light and salt repel him, and he’s expelled at 3:33, he is most likely a demon.

Rules of the Midnight Game

In order to successfully summon the Midnight Man, you’ll need:

Before you play, it’s imperative that anyone who does not want to participate (or who can’t participate) is out of your home. This includes sleeping children, and in the name of caution, your pets. Send them to a friend or neighbors house for the night.

It’s also important that every person playing has their own set of tools. You can’t write two names on one piece of paper for the same reason that you can’t share your candle or the tool you use to draw blood: it’s ritually unclean and alters the ceremony.

When you don’t follow the rules of summoning and play, this could allow the Mightnight Man to penetrate your defenses.

Once anyone or any living creature that does not want to participate in the Midnight Game has been removed to safety, gather all the implements necessary to summon and protect yourself from the Midnight Man.

The Midnight Man is now in your home. Your goal is to walk around in the dark of your home, and evade him until 3:33 AM–or suffer the consequences.

What Happens if You Lose the Midnight Game?

In order to win, you must keep your candle lit until 3:33 am. The candle is your primary means of protection. Do not lose it, do not share it. The Midnight Man will do everything in his power to extinguish it in order to get at you.

If the candle goes out, he is near. Stay calm: you have a moment to relight it before you’re in real danger. In the event that your candle dies out and you can’t relight it quickly enough, your only chance at keeping yourself safe is to create a circle of salt around you and relight it.

If you’ve dropped your candle outside of your protective circle of salt, leave it. Though you may have heard that the ring of salt only needs to be intact to offer maximum protection, this isn’t always the case.

Do not reach outside the circle to grab your candle, and do not ask another player to hand it to you. No part of you or anyone else must penetrate the circle or else you can be grabbed and pulled out or even worse: something can follow you back in.

The consequences of losing the Midnight Game are grave and often deadly. People who have lived to recount their experience report being viciously scratched at, like someone was trying to reach inside them. Other reports say that those who don’t survive are found disemboweled.

Keep in mind that there is a significant danger of permanent psychological or spiritual damage if you don’t win the game.

Should you play the Midnight Game?

It’s human nature to be attracted to things that are forbidden to us, so it’s no use to tell anyone to never play the Midnight Game, even if they shouldn’t. If you do decide to play, follow the rules to the letter and do not take any unnecessary risks.

Keep to these instructions exactly and you may be one of the few who live to tell others about your experience and provide deeper insight into who and what the Midnight Man truly is.