In Fort East Martello Museum, Key West, California kept in a glass casing, resides a boy named Robert, he is 40 inches tall, stuffed with wood wool. Robert reclines in a little wooden chair, holding a ragged dog with an apparent smirk on his face. With his beady little eyes and scars across his face, dressed in a white sailor suit. Did I forget to mention he is also the most haunted Doll in America?

The Beginning of Robert the Doll

Robert the doll’s story begins in the early 1900s where a young boy called Eugene Robert Otto, formally known as just Gene, was given a vintage doll. Although it remains a mystery who gifted him with the doll as the story has been passed down through generations.

One story states that the doll was gifted to Eugene by his grandfather following a trip to Germany.

Another story about his origins is from the  Otto family’s mistreatment of their domestic servants, they lived in a large house that still stands today, located at 534 Eaton Street, Key West, Florida. If daring enough you can stay in the Turret  Room where Robert the doll resided.

A young Gene was pretty fond of one of his maids, she was of Bahamian descent and was hired to look after him. She was later found performing Bahamian Voodoo and was immediately sacked. Before she left she gifted Gene with a teddy bear Robert.

The History of Robert the Doll 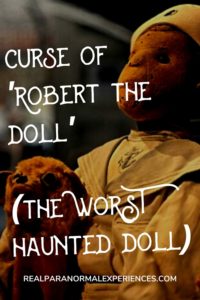 Gene formed an infatuation with Robert and gave him his name. When questioned he told his mother he wished to be called Gene as Robert had instructed him to. This was only the beginning…

Robert was Gene’s favorite childhood toy and the two were inseparable. Gene was often heard whispering to Robert, nothing unusual about that children speak to dolls all the time normally without a response, in Roberts case he responded with a deep, eerie voice which could be heard echoing through the walls of Gene’s room.

Violent commotions were often heard in  Gene’s Bedroom at night, when his parents entered the room furniture was often overturned, other nights toys were violently mutilated. when questioned, Gene was always terrified and shaken up by the events but always responded  ‘It was Robert, Robert did it’.

The Otto family Soon began to have their suspicions about Robert, as well as the incidences in Gene’s room, broken glassware, fallen picture frames and inanimate objects were moved and located in strange places all over their house. Even the servants noticed these paranormal activities around the house and quit their jobs soon after.

Gene in his adult life became an artist and married Annette, after his parents died he inherited the house. It was not long till he was reunited with Robert and It didn’t take long for Robert to become a prominent part of Gene’s life again and Annette insisted he be returned to the attic. Robert did not like this and demanded a room with a street view. Gene obviously obliged going against his wife’s wishes and created a nice spot for him in the turret room, also his studio, where the two would be locked in for hours painting and chatting away.

Where is Robert the Doll Now?

Neighborhood children reported seeing Robert bounce from window to window and were fearful to look up as he gazed down from the upstairs window with a sinister expression.


Gene Otto passed away in 1974, rumors have it that he was found in the attic with Robert’s hand place around his neck, and his wife Annette died soon after some say she was driven insane by Robert’s curse.

You’d be highly mistaken if you think Robert’s story ends here, Oh no! A new family moved into the house, and little did they know that Robert lived there.

One day Robert appeared in their daughter’s room and she instantly fell in love with him, but the love was not reciprocated, he had a different plan. The girl soon began having nightmares and was convinced that Robert was trying to kill her. To keep their daughter safe they decided to donate Robert to the Fort East Martello Museum, where he is still locked up, to this day, behind a glass display.

How Old is Robert the Doll?

Robert although being more than 100 years old, looking a little aged and worn down, is still a forced to be reckoned with. Museum staff have found him in different positions, cameras have shattered in his presence, footsteps are heard around the museum at night and his expression is known to change when those around him are disrespectful.

The Curse of Robert the Doll

Those who dare to visit Robert are urged to speak to him politely, treat him with respect and always ask his permission before taking his picture or risk being cursed…

Robert’s glass encasing is covered in over a thousand letters begging for forgiveness to try to break the curse as they have faced an array of misfortune after visiting him and engaging with him in a manner that is deemed unacceptable.

The visitors have experienced :

Was Robert the Doll Possessed?

Nobody knows for sure why or how Robert was able to wreak havoc on people’s lives. The voodoo that was placed on Robert all those years ago definitely explains the many mysterious and terrifying experiences faced by those who have had encounters with him.

The question is why didn’t the haunting stop after Gene’s death? Was Robert possessed by a spirit before the voodoo? No one knows, one thing we do know is that Robert continues to torment and scare those who are in his presence.

Is Robert the Doll Alive?

If you have the confidence to meet Robert himself, you can at the East Martello Museum, where visitors are welcome and of course if your brave you can request a photo or even just get a close look at Robert and you might catch him smiling at you, move around his glass prison, or stare at you through his beady black eyes.