In this story, we will be taking a look at Joliet the haunted doll – a so-called ‘cursed item’ that has remained in the protection of one family for over four generations…

But why does this family keep hold of this demonic item?

The doll is currently owned by a lady that goes by the name of Anna – we’re not 100% sure that is her real name or a pseudonym to stay anonymous in this case.

Anna claims that the doll has been in the possession of her family for over a century and it’s always carried the spooky ability to cry at night – sounding a lot like a baby that has just woken up.

Anna believes that she knows the four souls that are trapped inside the doll’s body because they are actually linked to her family tree. This close bond with the trapped spirits is the reason behind her wanting to keep the doll. 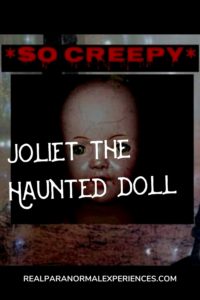 This paranormal case seemed to have begun when Anna’s great grandmother was given the doll when she was carrying her second child. It was a gift from a friend of the family that had a dark and hidden personality…and she really didn’t like Anna’s great-grandmother.

Anna now believes that this woman was so jealous and twisted inside, that a dark force was created from her which entered the doll.

This same tragedy would unfold for at least four generations.

From this point onward – every female member of Anna’s direct family tree would have two children, a boy and a girl. The male infant would always die just three days after its birth.

Anna’s great-grandmother also insisted that her dead son had somehow entered the doll – she would break her heart listening to him crying through the doll in the depths of night. She could never get rid of the doll – because she firmly believed that it contained her dead son’s soul.

When she died she passed the doll onto her daughter (Anna’s grandmother) for safekeeping. This turned out to be another deadly move…

Anna also lost her son, three days after he was born, and she believes his cries have been ‘added’ to the doll’s disturbing orchestra.

Each mother in the family has refused to give up this paranormal doll – they all believe that it somehow contains a trace of their baby’s soul. The strange thing about this case is that the cries of the doll can only be heard by female members of Anna’s family.