In this story collection, we will be covering a handful of real haunted doll stories – these little bundles of joy are not the type of bedtime companions you’ll want your kids to snuggle up with…

Probably the most famous haunted doll of them all – the extremely creepy Robert! If this name isn’t familiar to you already I highly suggest you take a look at the full Robert the doll story. Possibly one of the most talked-about dolls with a grim story – this is one you can actually visit and is on the bucket list of more than a few ghost hunters.

Either way – the doll was pretty messed up!

Robert became so obsessed with the strange doll that he gave it his own first name, he then began using his middle name (Gene) so that the doll could keep his own identity.

Whenever Gene was in trouble with his parents he would always blame his close doll friend Robert – the pair of them remained together even in Gene’s adult years.

When Gene eventually died, his wife finally took the chance to get rid of the creepy doll – she locked it in a chest, in the attic of their elaborate house.

She eventually decided to sell the house – but Robert did not go with her.

Myrtle Reuter became Robert’s new owner and she kept the doll for several years until she donated him to a museum. She informed the museum that the doll was an extremely ‘special’ object. 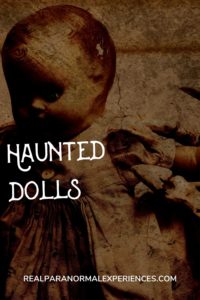 Kerry Walton came across this haunted doll when he was on an antique hunt in Brisbane, Australia – he was in the process of searching through items stored underneath an abandoned house when he spotted Letta.

Paranormal incidents seemed to follow the doll around almost instantly – when he was driving back home with his hoard of discovered oddities, he noticed the bag containing the doll rustling and moving.

Over the next few weeks, he was convinced that the facial expressions of the doll were changing at a daily rate…and pets seemed to shy away from it.

From the moment he brought Letta into the house – his kids started to wake frequently with night terrors.

Kerry eventually decided that enough was enough – he was going to get the doll out of the house once and for all. He found someone interested in it and drove it to the new owner…but he never reached that destination.

For some reason Kerry felt an unnatural urge to keep the doll as he drove it to its new home – he just couldn’t let go of it!

He returned home with the doll and decided to learn more about it.

He found an expert on antique dolls in a nearby museum who dated the doll at over 200 years old. This expert also informed Kerry that the doll originated from Eastern Europe.

An Australian psychic also took an interest in the doll, and after examining it, informed Kerry that the doll was made by a man who was grief-stricken because his son had drowned.

The famous Raggedy Ann doll is now under lock and key in Lorraine Warren’s paranormal museum.

The original owner of Annabelle hired a psychic to look into the paranormal activity surrounding it. This psychic concluded that the doll was possessed by the spirit of a dead girl named Annabelle Higgins.

When the Warrens became involved in the case they claimed that this ‘Annabelle Higgins spirit’ was actually demonic.

The original owner was convinced that the doll attempted to kill her boyfriend as he slept by strangling him. She also claimed that the doll would somehow manage to leave written notes on scraps of paper around the apartment.

The paranormal museum where it is now kept has a warning nailed below its locked glass casing – Warning, positively do not open.