Because of how paranormal phenomena are depicted on TV or in film, people are often under the mistaken impression that all hauntings are manifestations of a spirit’s consciousness and will. A classic haunting in the movies always has a spirit with purpose and will, right? Not quite.

Residual hauntings don’t actually involve a spirit. Instead, they’re like recordings that play when triggered, causing an action or event to repeat. Many paranormal researchers theorize residual hauntings are actually the most common type of haunting.

What is Residual Haunting?

There are many types of hauntings and paranormal activity to compare them to, but the easiest way to understand a residual haunting is like an old cassette or VHS being triggered to play when certain things do (or don’t) happen. There are two main theories to explain their cause.

The first is that residual hauntings are created by a traumatic event severe enough to result in lasting psychic damage. Though these can include murders, death isn’t necessary to create a haunting of this type.

Assault, natural disasters, fires, or any source of severe emotional distress on the living are all capable of creating residual hauntings. It’s also been posited that the living involved don’t even need to be human, and that animal residual hauntings are just as frequent.

The second theory is that a great deal of repetition over a long enough period of time can be all that’s required to create a permanent impression, resulting in “playback”. If enough energy is expended enough times, the impression could become ingrained in a space.

For example, think of ghost stories where a spectral figure has been reported walking in the same graveyard, at the same time, without seeming to see or understand that there is anyone there to observe them. Or even more benign, the sound of someone walking up and down a flight of stairs.

The History of Residual Hauntings

Though the notion that objects or spaces contain memories is as old as humanity, the contemporary theory stems from the 19th century.

Essentially, Babbage’s complex understanding of the natural and spiritual world refuted the belief that biblical scripture and scientific knowledge were in direct conflict. Instead, he said they were proof of the intelligence and wisdom of a higher power.

Babbage believed that this meant that science would one day be able to explain the unexplainable, including spiritual and paranormal phenomena.

Around the same time, the concept of place memory was laid out by the Society for Psychical Research. Members posited what we later referred to as stone tape theory: that inanimate objects were capable of holding memories of the things that occurred in and around them.

Another theory of the time, psychometry, explored the possibility of getting knowledge about past events from objects that had physical contact with them.

Residual hauntings are also called stone tape hauntings because early theories posited that inanimate objects, like stones, were both the tapes and tape players that relayed the hauntings. These objects were said to be present for the event they relayed.

Another similar idea is that space becomes a temporal battery, absorbing a charge and releasing it as it becomes full.

More recently, paranormal experts have posited that there are no containers necessary and that the energy generated by the event is sufficient to both hold it and play it back. Further experts posit that this battery effect might be related to water.

Bodies of water have long been regarded as containers and transmitters of spiritual power, as well as conductors of energy (like electricity). Residual hauntings could be the results of events occurring in proximity to a current or historical body of water.

Signs of a Residual Haunting 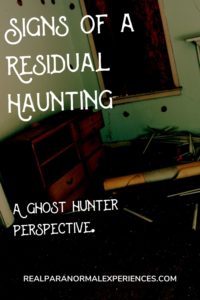 To better understand the concept of residual hauntings, it’s best to compare them to what they’re usually mistaken for: intelligent hauntings.

This is the type of haunting that people are most familiar with. Though it might seem rude to categorize this type of haunting as “intelligent”, it simply means that there is cognition and intent created by a particular being or set of beings. This is also where you can stray into the topic of different types of ghosts or spirits because some are more likely to repeat

The theory is that when a person dies, instead of their energy moving to the beyond (or absorbed back into the universe if you take the laws of thermodynamics to heart) their consciousness remains in the place, either where they died, or that held great significance.

Inciting events that lead to intelligent hauntings includes a sudden or unexpected death, unfinished business, a connection to the living that can’t be broken until they or the spirit lets go, or fear of what awaits them on the other side.

In these instances, things will occur in relation to the living, not in spite of them. Temperature drops, feeling negative energy, or attempts to grab your attention are hallmarks of traditional hauntings. An intelligent spirit wants to be perceived, not ignored.

You may even be able to speak to the ghost, either through assistive devices like spirit board or automatic writing, or they may interact in non-verbal ways such as moving different objects in novel ways.

Essentially, you will be able to sense a “personality” in relation to this haunting.

The key to identifying residual hauntings is the inability to alter the course of a paranormal event or communicate with a spirit. If you can’t “talk” with the ghost or change any aspect of the haunting, you can assume it’s not an intelligent haunting.

Other signs that a haunting is residual instead of intelligent include the repetitive movement of objects, like items being moved to the same place, regardless of how many times they’re put back, or items repeatedly moved in the same way.

If you see a copy of the family bible being taken for regular walks up the stairs and nowhere else, it’s most likely a residual haunting. You can put money on it if placing a barricade, or even standing in the path of where a spirit would be, doesn’t alter the trajectory in any way.

Smells and changes in temperature (not just drops) and altered humidity can also be caused by residual hauntings. Natural disasters like floods or fires that have occurred in or on a property are the likely cause.

Repetitive sounds are another big indicator. If you’ve heard whispering, voices, knocking, all in the same tone or pattern, you’re likely dealing with a residual haunting. This also includes things that may seem like intelligent hauntings, such as doors opening or closing.

Though it may be tempting to assume a paranormal event is the result of an intelligent haunting, don’t jump to conclusions. Sometimes what we believe to be novel activity is a pattern that hasn’t been recognized yet.

On the flip side, never dismiss any activity as residual without the input of a trained professional. Though rarely dangerous, this type of haunting can be the cause of injury when a spirit is ignored (or referred to as unintelligent!)